It’s a stark warning about the dark unseen forces that govern our lives. Within a few lines it neatly displays the uncompromising and questioning attitude that permeates every note and lyric within the album; during each of Asphalt For Eden’s seven tracks it’s clear that the listeners are held in very safe and steady hands.

Mixing classic hip-hop with elements of harsh industrial noise, existential samples and dark ambience, Dälek released five full-length albums – Negro Necro Nekros (1998), …From Filthy Tongue of Gods and Griots (2002), Absence (2005), Abandoned Language (2007) and the aforementioned Gutter Tactics to great acclaim before going on hiatus in 2011. Having toured relentlessly during this time, sharing stages with an eclectic range of metal and hip-hop bands like The Melvins, Tool, Pharcyde and De La Soul, the group decided to take a much deserved rest. Wouldn’t you?

Well here we are in a conservative-rampaged 2016 and rapper/producer MC Dälek (Will Brooks) has decided to bring Dälek back to life with a new line-up featuring DJ rEk (turntables) and co-producer Mike Manteca (samplers and effects) and it’s clear that they’ve lost none of their anger and desire to experiment in this re-shuffle. I’m not suggesting that it’s been the impact of Gove, Hunt & Co. on British society that inspired Dälek to return, but the societal anger that oozes from every pore of Asphalt For Eden seems particularly pertinent at this time.

The opening track ‘Shattered’ is a deep electronic flesh burn, gouging the skin with pin-point accuracy, creating wounds in with MC Dälek can poke deep his message raps with clarity and passion. It’s the clattering of someone trying to fix a broken merry-go-round. The wheel still goes around and around as always, albeit wonkily, but it could be a far better ride for all with some much-needed changes.

‘Masked Laughter’ begins with a surprisingly sweet and nostalgic intro. It sounds like a child’s wind-up music box, albeit one that has become warped through age and recorded using an old telephone receiver. MC Dälek sounds at his most breathlessly angry, “disposable rage”, the vocal shrouded in a wall of dissonance. It’s harsh but melodic, like a thousand-strong robot army, honking drills loudly as they plough forwards on a stampede towards human destruction.

Chilled trip-hop beats slice through foggy radio static on ‘Critical’. Lurking underneath the distorted circus-mirror reflection is a traditional hip-hop track but in Dälek’s reaching hands the potentially relaxed atmosphere is subverted and mangled into a mega-pissed-off, paranoid banger. Dälek have taken hip-hop and buried it under metres of wire wool, so you really have to lean in and get your face scratched in order to understand.

In many ways the title, Asphalt For Eden, sums up the sound and lyrical content of the record perfectly. It’s bleak but devastatingly concise. It creates the sense of a people trawling through the remains of a human society long since wiped out by their own hand, trying to piece together their past mistakes in order to avoid them again.

‘6dB’ is an instrumental respite. It’s a sad, guitar-led breather, which allows the previously apocalyptic messages and the calls for change to soak in, as MC Dälek raps on album closer ‘It Just Is’: “Most will miss the message but it’s there in every sentence”. Dälek don’t just want you to listen to what they’re saying but to hear it. 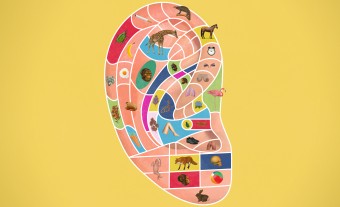