It’s been a while since we last heard from Alis (almost three years in fact), so we were very pleased to receive this ‘Polite’ reintroduction. If you like Maria Minerva-style reverb-fests, or found Grimes’ latest album way too poppy (unlike the esteemed Mr. Burman), you’ll find a lot to love here. I did anyway. Kier Wiater Carnihan

We actually know Alizzz, so not going to go too much into this [sounds juicy, something to hide? – Ed]. But, as I am three cups of tea down and it’s only midday, my scatterbrain mentality is perfectly suited to the scattershot rhythms within. Nicholas Burman

Emily Wells – You Dream of China

I’d like to think this is what soundtracks George Osborne’s dreams when he’s sleeping on a red-eye flight to Xinjiang, hoping to flog some more British infrastructure. Not that I’d particularly like to know what George Osborne dreams about, mind. Still, Emily Wells’ sumptuous, violin-embroidered ditty is enough to ward off any nightmare vision, even if its hypnopompic haziness means it risks drifting from your memory as soon as you open your eyes. KWC

Another song that seems to be in existence purely to generate a meme… I can sort of handle this when Drake does it first as a sort of in-joke, but it becomes a bit tedious when it seems to be turning into an actual genre. It sounds cool, and Badu certainly knows how to make the central loop crack and swing, but this’ll need a remix or two before it becomes interesting. NB

The psych side-projects that have popped up since the infamous turd-flinging, clothes-removing Fat White Family belatedly rose to fame off the back off of Champagne Holocaust should’ve hinted that their next step would be a step away from the garage band ethos they were flaunting back when they were turning Brixton pubs into mosh pits. ‘Whitest Boy On The Beach’ will no doubt be a lot more rawkus in a live setting, but on record it sees the band approach from more subtle angles, especially with the crescendoing horns. I’m not the world’s biggest fan of the krautrock renaissance, but the funk-inflected bass line has me hooked. NB

‘Cracks In Between’ starts off sounding like someone trying to vacuum up a pan of popping corn, before smoothing itself out into a crisp, twisting slice of electronica that the likes of Nathan Fake or Plaid would be proud of. Stick it on now, it’ll be the most gorgeously undulating six minutes of your week. KWC

Melt Yourself Down – Dot to Dot

Between this and the return of Fat White Family (see above), it feels like 2013 is back with a vengeance. In fact, if you were to compile the top ten gigs we went to that year I’m pretty sure Melt Yourself Down and the Fat Whites would account for at least eight of them on their own. Personally I much prefer MYD’s comeback single, which glows with the same fiery energy and Nubian hornplay that made their eponymous debut such a delight. Smoking. KWC

It’s quite difficult to find rock music which is inclined to sound original and interesting (Girl Band being a recent exception), but Mass Gothic boil together grungy guitars with an enticing melodic vocal which doesn’t feel the need to dumb itself down for the sake of it. In that sense, this is actually reminding me of Interpol quite a bit… NB

Liking the not-quite-there beat to this, reminiscent of Mumdance and Novelist´s ‘1 Sec’ from earlier in the year. The lyrics don’t quite go anywhere, although Maxsta shows enough panache to keep it entertaining. NB

I wouldn’t want to suggest NOTS belong in a sewer, but their latest single sounds like it was recorded in one. And it’s all the better for it too, as ‘Shelf Life’ is a grimy, jittery, two-minute blast that puts the ‘fun’ in ‘fungal infection’. Death to Pro Tools punks, long live NOTS. KWC

In most other artists’ hands a song like ‘Lime Habit’ would be dull as dishwater, but POLIÇA seem to have a genuine affection for the light ’80s synthwave tones they draw from. Channy Leaneagh’s vocal a gently luscious too, giving the track a heartfelt edge. NB

Who needs 25 MCs when you’ve got Wiley? Well, Wiley does apparently – although I’m not sure whether they’re required as extras for his videos or to fill in the blank spaces he leaves after every one of his bars here. Decent track, but it feels like half of it is missing… KWC 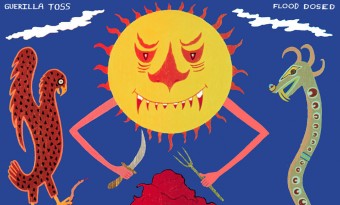 Our round-up of October's best EPs includes the free-spirited Guerilla Toss, the medicated Palace Winter and the drunken electro-hornet that is Jimmy Pé...
Read More