A project which largely grew to encompass frontman Dara Kiely´s intense feeling of melancholy after a particularly ecstatic (non drug related) week, the excitement around Dublin’s Girl Band germinated during their first bout of live shows. On stage they showcased their ability to create truly unruly, growling, piercing bursts of noise which contorted the traditional forms of post-punk which the four-piece draw from. We weren´t to mistake their statuesque stage presences as a lack of enthusiasm. Bassist Daniel Fox slid Grolsch bottles over his fret board, Adam Faulkner did all he could to ensure the drum beats were as understatedly powerful as possible and guitarist Alan Duggan tried his best to produce sounds in ultrasonic frequencies.

Holding Hands With Jamie is, in the best way possible, what we were expecting from Girl Band. The sudden changes in pace and volume are noticable throughout (to the detriment of your hearing), with Kiely´s deadpan vocal delivery cracking into back-of-the-throat screams at random. Musically we stretch from Fugazi punk and Bauhaus goth to the stranger ends of noise rock and scratchy experimentalism. The head-on approach to playing the three most recognisable instruments in pop culture makes for a thrilling, visceral backdrop – often forefront – to the project, but I´d be lying if I said it didn´t leave my ears pretty exhausted. Girl Band have seemingly not given two hoots about the potential for a wider audience, and the album is all the better for it, even if that does mean casual listeners may hesitate before giving it repeated listens.

Lyrically it´s about as unpredictable and skittish as the root topic may imply. Sitting between James Murphy´s witty self-deprecation and the train-of-thought rage of The Fall that´s recently been brought back to popularity by Sleaford Mods, the often indecipherable ramblings here suddenly sound a lot more on trend than they did in 2013 – they even bring to mind the often seemingly unrelated diary-like entries Young Fathers utilise too.

Kiely doesn´t try to join Jason Williamson as a voice-of-the-people though, instead relaying much more psychedelic imagery. He seems to have two obsessions. The first is food (“Feta cheese string-fello / Mentholic aubergine / I’m wearing paprika”), and this is regularly connected to eroticism (“Oh sex pesto… It was all she knows from the tip of her tongue to the tip of her toes”). The second is his physical appearance, which is revealed both in kitchen sink realism, “I look crap with my top off / Spend my time watching Top Gear with my trousers down”, and in relation to unknown third, usually female, parties. “I looked like Columbo if I just winked a bit / I’m wearing a woman’s jacket just to mirror you…” he spits on furious final track ´Witchdoctor´, maybe referencing the Jamie with whom the band are holding hands, and also the Girl in this particular Band.

The brief ´The Last Riddler´, which anchors the middle of the record, retells Kiely´s real life encounter with a doctor during his week of elation. It features one of the best pairings on the record (and a Stewart Lee reference): “Give it to me straight like a pear cider / Well, you’re not God mate and your mother’s scared.” From the sound of Holding Hands With Jamie the whole world is scared, loud, bruising and confused. Four unsuspecting Dubliners have joined an ever-growing list of artists currently looking to push some boundaries, not sit comfortably within pre-existing ones. For that this album is well worth your time, although maybe you won´t put it on all the time. 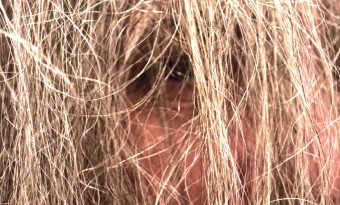 If a biker gang of drunken insects were to start squatting in your earholes, Luminous Bodies' debut album is undoubtedly what they'd be partying to...
Read More