Following last month’s ‘All the things I forgot to review’ column, here’s another assemblage of brief(ish) reviews of all sorts of things. Mostly things I’m angry nobody told me about sooner (even though they probably did).

Franz Ferdinand and Sparks. It makes a lot more sense than you’d expect.

It took me a while to get around to the album, but I kept hearing bits on the radio and thinking ‘yes, actually, I want this’.

I was right. Whether it’s the catchiest bomp-bom-diddy-diddy in the world (‘Police Encounters’), the perfect song for an encore (‘Piss Off’), or just the most overwrought, wittiest rhymes you’re likely to hear (“Fake existentialist / I’m the martyr / I steal from the bank of Jean Paul Sartre,” on ‘A Little Guy from The Suburbs’), there’s so many adorable moments here.

Chief among them is the arch and overblown ‘Collaborations Don’t Work’, denying its own precept by beautifully articulating, separating, blending and compounding the key stylistics of both sides of the equation. As the final coming together roars into view, you’ll be stomping. And if you aren’t, you can piss off too. Humourless git.

Don’t worry though. The record is infinitely more charming than I am.

[You can read Eamon Murtagh’s ‘haiku review’ of FFS here]

Okay. Okay. I should’ve spotted this sooner. I kept hearing ‘On the Regular’ and assumed it was just so damn chirpy it had to be a one hit wonder. One of those absurdly strong blasts of electronic pop that glows too bright. But then I spotted the video for ‘Call It Off’, and the exquisitely adorable Shamir Bailey slowly turning into a muppet.

To be fair, the album does stand in the shadow of the perfect pop of ‘On the Regular’, but to be honest so does almost all the pop I’ve heard this millenium (notable exception: ‘Pharoahs’ by Sbtrkt). ‘On the Regular’ is like the ultimate, purest distillation of sass. A bass bouncy enough and an attitude endearing enough to pull off the line: “You want to talk shit but you know that I am Illy / Illy to the fullest, you can call me cancer / No multiple choice, cause I’m the only answer.” It’s pretty perfect.

The rest of the album still needs a look though, from the broodier sass of ‘Vegas’ (“where sin is alright, at least at night”) through to ‘Darker’, where ominous distorted screams rumble underneath a vocal that feels like it could’ve been from a Shakespeare’s Sister-esque ’90s electro ballad.

Fucking adorable. Eat it right up. Five times a day.

This is one I’ve been asked to jump on.

It opens pretty engagingly, with a fairly grim emotional loop as a basis. What we have here is pretty interesting rowdy rock, with some charming vocal explorations of dull American life over the top and some surprising electronic layers. Although I guess the Berlin Wall of Electronica and Rock collapsed a pretty long time ago, and I shouldn’t be surprised.

It’s not grabbing me, to be honest, but it’s varied and worth a listen. I probably won’t be pissed off when it hits a lot of end-of-the-year best ofs, but it’s not going onto mine.

I do quite like the grim (again) broody (again) melancholy (haven’t done THAT one yet) of ‘Red Comes in Many Shades’, which weirdly reminds me of a depressed, white Grace Jones. Which is much better than it sounds I promise.

Anyway, I’m not exactly enamoured, though have something approaching a grudging respect.

At least, that is, until it hits the end.

The last track, ‘Women’s Work’, manages to Moroder its way right into my heart.

Mostly all I’ve ever wanted is a synth that sounds like a violin and a big long and messy wail over a tight and bombastic electro drum beat. And some angry chorussing with lots of weird layers.

Buy it for this one. Bargain.

Joanna Newsom is the closest I’ve ever got to punching the editor. Basically, don’t bother trying Divers if you don’t already know you’re into it. This goes for Newsom’s gigs too. Nothing ruins a moment like hearing someone you care about grumble loudly nearby. [Sorry – Ed.]

I’m not going to go much further with that, though. Basically, I really liked this. It feels like she’s squeezing the songs a little to fit them into the length of a normal record, but the sense of vastness and opening out is rarely hurt, and it’s better than the lack of editing that led to the ‘three albums in one, then shaken up’ of the often incredible Have One On Me.

Divers sees her returning to her squawkiest vocals, but with some of her richest accompaniments. ‘Anecdotes’ won me over the instant the Beach Boys strings burst through, opening up the song into a wider and more wondrous landscape. The album is full of moments like that. Stunning arrangements that paint fairyland pictures.

Oh, and the lyrics are some of her cleverest and wittiest.

I quite like the relative simplicity of ‘Leaving the City’. Using a mellotron in place of lead guitar on what could probably be described (if only by me) as Newsom’s first bash at an honest-to-god Rock Song. Those synths add a wonderful new texture and counterpoint to Newsom’s divisive (and glorious) technical caterwauling throughout. I want to compare it to Queen’s dropping of the ‘still no synthesiser’ epithet, but really it’s just yet another string to an already embarrassingly overstrung bow.

But all of this is unnecessary. You already know how you feel about Joanna Newsom, surely? If not, this is a wonderful place to start. You’ll know pretty quickly how you feel, but be warned, I hated her music and got won over years later. Once you fall you go head over heels, and she’ll never let you go. God this is a lovely record.

The finale is particularly outrageous, and probably deserved another five minutes of build up. Again, Newsom seems happy to half-borrow rock structures, and reinterpret them through more traditional instrumentation. She’s happy to toy with expectations, build you up to something and stop halfway through.

(But with a bit of luck these words will force him to listen to the fucker. Ha. I win.)

Speaking of Queen (sort of)…

Basically, Queen’s whole discography got reissued in September, and I’m a massive fan, so I bought a semi-random selection.

Listening to this one, I was overwhelmed. Firstly, I didn’t realise that Queen abandoned their ‘no synthesizers’ policy so early (although it does line up neatly with the beginning of the eighties, which makes it pretty easily explicable if you want a nicely rounded historiography).

But secondly, have you actually listened to ‘Play the Game’ recently? That synthesiser, the first synthesiser they ever used, is the most enormous, overblown and wonderful synthesiser ever. It basically gets a solo in the middle of the song that is the equivalent of dropping a tank on a love song.

Ranting about it on Twitter has led me to launch a project about Queen. You can also make up for the fact that The Monitors are cheapskates by paying me directly. Follow along. It’s going to be ridiculous, and I swear you don’t need to like Queen to like what I’m going to do with this one.

Give The Game a listen (or News of the World, maybe, although you might want to skip the first few far-too-obvious tracks). It’s got the least sensitive song about suicide ever, and a song about dragons. What more could you possibly want?

That’s your lot for today. I was supposed to do Julia Holter and Nicholas Godin, but I suspect I’ve ranted long enough already. Also my thoughts on Kamasi Washington’s The Epic, if I can muster anything more eloquent than ‘for fuck’s sake put down what you’re doing, lie down, shut your eyes and listen to this – I promise you haven’t got anything better to do with the next three hours’. 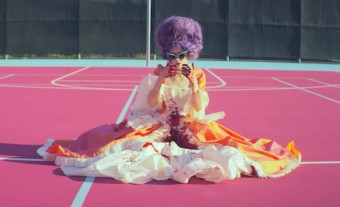