Considering how hard it was to distil the best albums of 2015 into a list of just fifty (something we, er, kind of failed to do anyway), the challenge of creating a similar tally of individual tracks seemed near impossible. So we tried something else instead.

Behold: a cadre of Monitors scribes choose three tracks that summed up 2015 for them, alongside an associated playlist for your streaming pleasure*. Draw the curtains, put a brew on, and see out the year with a sterling selection of the year’s best sounds…

Police brutality. Global conflict. State snooping. These issues are as rife now as they were in February, when Open Mike Eagle covered them all in his superlative ‘Dark Comedy Late Show’. Which is a bit depressing really, but thankfully the track itself is anything but a downer. Much like Sleaford Mods over here, Open Mike Eagle’s twist on the often po-faced tradition of the protest song is based on observations that are amusing as often as they are enraging. Usually they’re both at the same time, as exemplified in verses like this: “I can see the SuperBowls of the future: The Ferguson Blacks vs. Missouri State Troopers / The Privacy Rights vs. the Personal Computers / Concussion Researchers vs. University Boosters…”

It’s dark comedy sure, but Christ knows we needed a laugh in 2015 – even a bitter one.

The two premier guitar bands of 2015 were Dublin’s Girl Band and Montreal’s Ought, and each of them produced songs that seemed to spark off an ecstatic collision between mundanity and insanity. So it is with ‘Beautiful Blue Sky’, which juxtaposes Western cultural normality with the conflict, commerce and commodities which ultimately sustain it, over a glorious Television Without Buildings backdrop. Singer Tim Darcy’s frenzied repetition of social niceties reduces them to meaninglessness, leaving a sense of liberation that falls somewhere between zen and nihilism – “I’m no longer afraid to die, because that is all that I have left.” That, and the big, beautiful blue sky.

As a skint youngster, going to the pub presented not just the issue of getting served, but also required a strategy to eke out meagre funds as far as possible. Hence the tactic of always selecting the longest tracks available on any pub jukebox, to ensure the cheapest possible soundtrack to pint-swilling. ‘Stairway To Heaven’, ‘Shine On You Crazy Diamond, ‘The End’… these usual suspects allow you to dominate a jukebox for a mere quid.

If only Xeno & Oaklander had been around then. Commissioned by the Centre National d’Art Contemporain in Grenoble, their opus ‘Movements’ is an electronic odyssey that clocks in just shy of 34 minutes, not one of which is wasted. Drifting from ambient synth burbling to gargantuan organ chords, via pulsating arpeggios and beautiful wordless vocals, it’s a gorgeous piece of work. God knows what your average pub-goer would make of it, but if any London boozers are willing to put it on their jukebox then they’re guaranteed a shiny gold pound coin from yours truly.

In a year when new grime instrumentals and tracks from Novelist, Skepta, Stormzy, Lady Leshurrr et al appeared faster than we could sometimes keep up with, it’s telling that this one-off collaboration from the very start of the year still sounds like a futuristic re-imagining of everything the UK club scene delivered since.

The world’s most entertaining lyricist reworked by one of the best producers currently revitalising breakbeat. If this doesn’t get you ready for a night out, nothing will.

Kojey is set to gain some real traction in 2016, and on the back of the lyrical agility of ‘Open Hand’ that attention will be well deserved.

Song of the year. Fact. If I still went to discos (I don’t, I’m 32) and this came on, I’d get on the dancefloor and dance like an awkward lunatic. Which is actually quite a weird thing to be saying about a Hey Colossus song. It’s a perfect mix of twitchy post-punk guitars and repetitive kraut grooves. Just fucking quality, no messing.

It’s Sparks. It’s Franz Ferdinand. It’s good. Never been a big Franz fan to be honest but the Sparks lads can do no wrong in my eyes. This just further proves it to me. Lovely, danceable indie-disco, with Russell Mael’s insanely dramatic voice forcing Alex Kapranos’ dry croon to new glitzy heights. It makes me want to move my old bones rhythmically.

This is the blinding track that powered me to the finish line during the week I walked a half-marathon every day for the Single Homeless Project. People ended up giving over £1000, for which The Monitors should take no small amount of credit – the site’s support and publicity for the fundraiser was amazing. As a result, the song is inevitably tinged with positive vibes for me (as well as a ghostly feeling of sore feet), and even six months on I find myself drawn back to its tribal beat and head-blasting finale.

As a long-time Joanna Newsom fan, the title track from her October album does everything I had hoped for: spine-tingling harp, eye-wateringly beautiful harmonic turns, and lyrics which somehow encapsulate universal truths while also being intensely personal.

The shining synth and glowing vocals of ‘New Air’ are so full of optimism and possibility, it’s been my go-to song every time something good has happened this year. Its fearless structure and instrumental creativity also mark a big step up for the Liverpudlian five-piece, which greatly pleases my Scousey side.

I have this thing for sassy electro pop. Kier’s exploited it relentlessly when making compilations for me in the past. This year’s addition to the canon* (which may have originally come out last year, I forget) is ‘On The Regular’. Everything is perfect here. Sheer sass, perfect delivery, and so many cutely brutal rhymes. If you see me sad for even a moment, just pop this on.

* ‘Pharoahs’ by SBTRKT, ‘Tightrope’ by Janelle Monae and Big Boi, ‘Konichiwa Bitches’ by Robyn, ‘Y’all Get Back Now’ by Big Freedia, ‘HSKT’ by Sylvan Esso and ‘Shake it Off’ by Taylor Swift (but only when you play ‘Baltang Ort’ underneath)

The track never quite pops on the record, but this wrapped up one of the best live sets of the year and basically restored my heart to full strength towards the end of a very difficult summer. Herbert’s been with me a while now, but dancing like a Supreme in the aisles of the Queen Elizabeth Hall was probably the closest I’ve ever been to that blissful, glorious joy.

I’m a person with big, weird mental difficulties. Anxieties, worries, ups and downs. Sometimes I need something I can lean into like a bath, to re-inflate my soul. One of the most beautiful Debussy tracks, given a sensitive but still maximalist big band treatment? So often what I need. So simply perfect.

I am adamant ‘Spanish Translation’ ranks up there with Low’s finest songs. Yes, up there with ‘Two-Step’, ‘Sunflower’, ‘July’, ‘Dragonfly’, ‘Walk Into The Sea’, ‘Violent Past’, etc., etc. A bittersweet lullaby with typically bleak lyrics and a bombastic chorus, its synths swell louder and louder until suddenly cutting back to reality while Sparhawk growls, “Everything once within reason, falling away like the dust”.

That synth has probably been recurring in my brain ever since I heard it at possibly the most significant, beautiful moment of my year. I am forever grateful for that.

I’m cheating with two choices here, but the reason is that each song wouldn’t have so much meaning to me without the other. Panda Bear’s ‘Crosswords’ was easily the best song I heard at the start of 2015, and Animal Collective’s ‘FloriDada’ is quite simply the finest song to bow out the year on – and reminds me of Panda Bear, who kicked it all off. On one hand you have the simple groove of ‘Crosswords’, which jives along with its RnB beat and reverbed piano, and on the other a cacophony of noise and machine gun lyrics with the sweetest lilting harmonies. What a wonderful year for music it has been.

Stunning comeback from the most consistent rock band of the past decade; a comeback which sounds completely different and yet utterly the same. The new, funky chugging riff style of ‘Snakeskin’ retains all the unique codas which make Deerhunter such a remarkable one-off, not to mention Bradford Cox’s strained vocals and turns of phrase: “I was born with a crippled man on my back / I was natural, I was geographic black” and Locket Pundt’s signature lead guitar flourishes.

Most would think it strange to name a neoclassical piece with string quartet, grand piano and no percussion section or vocals as my hands down favourite track of the year. But the quality of any song has nothing to do with how quirky or innovative the styling: it’s how moving the composition is. Chilly may have forayed into rap and electronica, but as this proves, sometimes a classic combination has endured the test of time for a reason. Especially when the piano is being struck by one as masterful as this.

To be fair, the recorded version of this doesn’t do justice to the live performance – but that’s the measure of any musical act: can you do it better live? Or are you dependent on the studio to impress? Young Fathers in fact sound on disc like compressed versions of their explosive live selves: screaming, thumping, drumming, heaving. Long may they continue.

This isn’t even my favourite Gaye song (that credit goes to ‘You’re The Man’), but in 2015 it represented a triumph for not just one of the greats, but for artistic originality. Released in 1977, this track was gloriously victorious this year when a judge and jury pronounced that ‘Blurred Lines’ by Pharrell Williams and lamentable Canadian export Robin Thicke was a rip-off in the truest sense of the word. Fuck you Williams and Thicke for producing such a pathetic impression of a master. Fuck you for filming that unrelentingly misogynistic video. And fuck you most of all for suing the Gaye children first – a move that wasn’t just vicious, it was also idiotic. Long live Marvin Gaye – still putting hits from the grave. You weren’t just knee-weakening, you were – oh yes – the man.

*The playlist has a few extra tracks tacked on for good measure – 168 of them, to be precise… 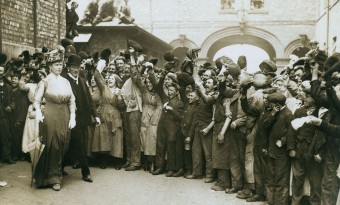 Our best albums of 2015 list rolls in with all the unfestive inevitability of an EastEnders Christmas special - but much less depressing, obviously...
Read More