The Monitors was down for a month or so over the summer, but that didn’t stop our inbox being flooded with fine new music. To prove it, here are the best eight EPs we were sent during July and August…

I lived in Brighton many years ago, and returning there recently I was amazed at how little it’s changed. All my favourite pubs, shops and pissed-up tramps were still exactly where they’d always been, albeit surrounded by some new graffiti and the odd pop-up bar. Sadly I didn’t get to any gigs or clubs while I was in town, but happily the city still seems full of talented producers; judging by Aotoa’s debut EP anyway.

Great Ideas kicks off with the crisp, carousing two-step of its eponymous opening track, but it’s the contrast between the slow, luxuriant bass growls and hyper percussion on ‘Alone Now’ that really impresses – not least when the jungle breaks kick in halfway through. Luscious final track ‘Altogether’ sums up Aotoa’s real strength though – his ability to make beats so fresh they sound like they’ve been washed and whirled through a salad spinner.

I ticked off a long-time must-see this summer when Portishead headlined Latitude, but I’m still yet to lose my Beak> virginity. Which is doubly annoying having become obsessed with the band’s latest EP, the tracks on which would do themselves justice on any Portishead album.

‘The Meader’ is probably the Beak>iest number, sounding like a slower, surlier cousin of Can’s ‘Mother Sky’, while ‘Broken Window’ indulges Barrow’s clear John Carpenter fixation. The second half of the EP is supposedly by the band’s backwards alter ego Kaeb, although what this actually means in practice is hard to fathom; and it doesn’t really matter anyway. ‘When We Fall’ is a gorgeously spiralling piece in the vein of Portishead’s ‘The Rip’, and closer ‘There’s No One’ incorporates the vocal talents of Stones Throw rapper Jonwayne, whose rhymes sound less incongruous than you might imagine over a Wu-Tang-style beat and some haunting backing vocals. The lack of Beth Gibbons means Beak> will always remain in the shadows of Portishead’s stadium-sized status, but this EP proves it’s not for want of quality.

The Death Of Pop – Bubble Bath

At first the latest EP by The Death Of Pop sounds like just the latest in a long line of shoegaze reboots, tuneful and well-produced but just a little tired. Luckily, the longer you listen to Bubble Bath, the more apparent its charms become. ‘Rayban Party’ is the first to prick the ears, taking the pretty but uninspiring melodies of opener ‘Still Stupid’ and ratcheting them up to a hilariously high-speed tempo – if the guitar-work is Marr-esque, that’s because it has to be in order to keep up.

‘Leave Me Behind’ operates, understandably, at a slower speed, but its wooziness makes for a pleasant contrast rather than a frustrating stutter. It’s the final song, ‘Headaches’, that really nails it though. Reversed guitars lead into a weighty pop-psych number akin to Tame Impala’s ‘Feels Like We Only Go Backwards’, and it packs enough colour-trailed thrust to ensure it’s a while before you return to Earth. As bubble baths go, that’s the sort you want to stay in until you go all wrinkly.

At 36 minutes this probably qualifies as a full album, but seeing as we missed it when it was released we’re sticking it in here anyway. Rocket Recordings seem to have some sort of monopoly on fine Swedish psychedelia, but for my money this beats even the almighty Goat for heady delights and high-peaking thrills.

Take opener ‘Kollektiv’, which somehow manages to feature a sitar solo without sounding clichéd, or the battle between the serrated guitars of ‘Milarepa’ and the flapping recorder solo that flits around them. The ten-minute long ‘Och Solen Sänkte Sig Röd’ possesses a smouldering warmth that befits its title (Swedish for ‘And the Sun was Red’), reaching plateau after glorious plateau during its musical mountain climb. If that’s not enough to convince you, there’s even a track called ‘National Drone’ that, should Jeremy Corbyn get into power, will hopefully be appropriated to replace ‘God Save The Queen’. Glory to the heavenly Hills, and Frid to all men and women on earth…

The downcast yet colourful grime-flavoured tracks on London producer Myth’s debut EP bring to mind E.M.M.A.’s superlative 2013 album on Keysound, Blue Gardens, as well as Zomby’s more meditative moments. Like those artists, Myth has a talent for stark, spacious productions that still manage to spin out surprisingly evocative melodies.

If there’s a criticism it’s that his tonal palate is a little narrow, meaning that tracks like ‘Semagi’ and ‘Pheonix’ fail to flex as much as they would on a more varied release. Still, the tweaking rhythm of ‘Skyz’ and lurching bleeps of ‘Luminous’ would stand out in any environment, while the title track is an absolute beauty – an icily funky three minutes of melancholic electronics. If music really could evaporate, this would be worth climbing a windswept Welsh mountain for in order to collect it when it came back down.

All sorts of fresh sounds seem to be emerging from South America at the moment, and Ecuadorian producer Nicolá Cruz shows why on his sultry Invocacion EP. A traditional percussive engine drives the original mix of ‘Mantis’, with the Andean pipes of the title track adding a floaty melodic touch that stops the music getting too bogged down in its own beat.

Nicolá Cruz has previously worked with near namesake Nicolas Jaar, and there’s a definite similarity between the two, namely in the way they smoothly mix acoustic instrumentation with electronics. The subtlety Cruz shows in doing this, never letting one element bully the other, is crucial to the EP’s success – emphasised by the fact the remixes on the record can’t quite attain the same sumptuous level. While Xanga and L_Cio’s versions are good enough in their own right, neither gets close to the deft touch of the original mixes.

Considering the elfin Pixx has both Brit School pedigree and a legendary indie imprint (4AD) behind her, it’s surprising this EP hasn’t made a bigger splash. Especially when you consider how good the lead track is, all muffled synths and clear-voiced beauty. In fact, with its ethereal melodic atmosphere it’s probably the most 4AD thing 4AD have put out in flipping ages.

That the rest of the record fails to quite live up to its lead track is no great disappointment, as there are plenty of moments that hint at the talent that gives the opener its buoyancy. The spidery guitars of ‘A Way To Say Goodbye’ have a hypnotic essence, while ‘Deplore’ squiggles its way down a dark pop staircase with a nice sense of detached drama. ‘Deplore’ is the only track that seems to be pulling in the wrong direction, a low-key piano ballad more likely to inspire stifled yawns than moistening eyes. Hopefully Pixx sticks to her guns and applies the ‘Fall In’ formula to her next release.

Semi Precious – When We Talk

Semi-Precious, aka Guy Baron, produced one of our 20 favourite EPs of last year. This follow-up, released via Matthew Herbert’s Accidental Records, betters it, and with impressive brevity – the five tracks here total less time than some single songs reviewed in this column.

Semi Precious seems to generally deal with fragments and snatches of songs rather than full-blown compositions, and when collected they make for a masterful, if mournful, kaleidoscope. ‘When We Talk’ feels like someone trying to tearfully fit two mismatching pieces together, ‘All Night’ sounds like he’s nicked a spacey tool out of Daniel Lopatin’s bag of (Oneoh)tricks, and the plaintive, echoing piano of ‘Days Of Night’ makes an effective frame for Baron’s soft vocals.

The shivering strings of ‘Extra Mile’ recall Dean Blunt at his most affecting, and it’s a testament to the precise Semi Precious style that ‘Framing Words’ almost feels overlong at 2:49. If he keeps on developing like this, Baron will be fully precious before long.

Single-Minded: Summer's over for Jimmy Whispers... 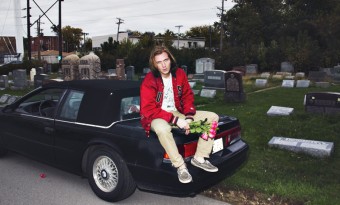 A bedroom ballad from Jimmy Whispers weeps all over this week's Single-Minded, alongside new music from Tinashe, Colder, Jacky Winter and Saul Williams...
Read More