Always drawn to a fellow Merseyside presence down south, last week I scurried along to Elektrowerkz to see Liverpool five-piece Outfit round off their UK tour. I’d been looking forward to the gig with an excitement bordering on teenage: the band’s electro-indie debut Performance had me hooked back in 2013, and this year’s masterful follow-up Slowness has been on repeat all summer. I’ve also had the odd stab at the band’s deceptively tricksy basslines, so was keen to nab a spot up the front where I could decipher the live bass notes to my nerdy heart’s content.

Tickets were still being sold on the door, which surprised me – Slowness has received a fair amount of critical acclaim, with Radio 6 airplay to match – but it seemed this little Monday night rendezvous had passed most of the capital’s Guardian-reading Laverne-doting indie types by. Combine the under-capacity venue with the crowd’s Monday blues, and the result was a tangible lethargy in the air, enough to strike fear into the core of the most seasoned of performers.

So there we were, waiting, talking politely amongst ourselves, when someone collided violently into the back of me. Before I could get mouthy, I realised it was the band making a valiant attempt to get through the crowd and up to the stage: again, this felt oddly humble in comparison to the grand fanfares given to Outfit on their media outings. They later remarked on this when announcing their decision not to play an encore: ‘This is our last song. No really it is, we’re really not coming through youse lot again, it’s shit’.

Imaginatively, the first three songs were the first three tracks of Slowness, a fact acknowledged with a deadpan chuckle by frontman Andrew Hunt. The rippling synths and call-and-response chorus of ‘New Air’ have all the ingredients of a winning set opener. Yet much to the band’s frustration, the first ten minutes or so were plagued by audio imbalances, meaning we missed the kick of the drum entry into ‘New Air’ and the subtle electronic adornments of ‘Slowness’, and instead we all just felt a bit on edge.

I realise I’m not painting a picture of this as the most dynamic of gigs – and it’s true, the peripheral details weren’t exactly dazzling – the crowd shuffled to the beat at best, and the opening tech issues initially hung heavy over the music itself. But Outfit weathered the storm, in small part thanks to some good old northern humour which cut clean through the austere atmosphere, and in large part thanks to the formidable repertoire they went on to showcase.

The turning point came when Hunt swapped up his keyboard for a guitar for the brooding ‘Elephant Days’. At this point the band cast off the shackles of the technical mishaps, and conjured up an energy which built up to an exhilarating instrumental at the end. Maybe it’s also the case generally that the static stance of a frontman behind a keyboard is always inferior to his freedom of movement when he picks up a guitar? I’ve been pondering that all week, and the jury’s still out.

In any case, once they found their mojo in ‘Elephant Days’, Outfit weren’t going to let go. There were some real menacing moments, notably the aggressive dissonance of ‘Spraypaint’, and the stormy 7/4 finale of ‘Swam Out’. These were countered by the warmest corners of Outfit’s work, including early single ‘Thank God I Was Dreaming’, which coaxed us out of the set’s darkest moments with its candy floss bounciness and gentle melodies.

And no matter whether the band were playing devil or angel, there were never any pretentions hanging around. For sure, the performance was heartfelt, with Hunt shyly announcing before ‘Happy Birthday’ that it was his absolute favourite song to play (on writing that down I’m having visions of him proceeding to play a souful rendition of the newly-out-of-copyright classic … sadly, the urgent track of that name on Slowness is something quite different). But all in all, this was just five committed musicians looking to share their work and ideas with the world.

The band were also keen to sing the praises of Lucy Hardcastle, whose slow motion experiments with magnets and gloopy cornflour liquids provided one of the most original visual backdrops I’ve seen this year (and believe me I saw my fair share at Sonar festival back in June). Definitely check out her work on the ‘New Air’ video if you fancy spending five minutes not thinking much except for ‘those blobs are damn compelling’.

Elektrowerkz and its Monday night vibes really threw down the gauntlet to the Liverpool lads, and by ‘ek they pulled through. I’ll be keeping my eyes peeled for a warmer home crowd at the Kazimier before it shuts later this year, but should that fail, we hope Outfit venture down to London again soon: we promise to turn out in our droves next time, and I’ll make sure my scouse nan has a proper word with the sound man. 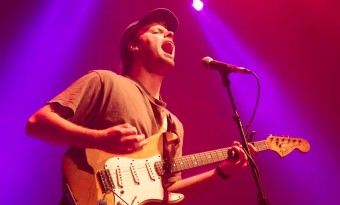 Mac DeMarco may have been unofficially crowned the new king of slacker culture, but a mismatched set and sprawling covers section make for a slightly awkward coronation...
Read More