I am the whitest man alive and never is this more evident than when I’m stood in 30 degree heat. Luckily Sonar offered me many opportunities to keep it (literally) cool. Last weekend the twenty-one-year-old dance music and technology festival hit Barcelona once again, with the official three ‘By Days’ and two By Night-ers taking place alongside the unmanageable amount of Off-parties throughout the city for a whole five days as well.

The ‘By Day’ event orbits around the courtyard of trade show space Fira Montjuic. This outdoor area is complemented by two indoor venues (Hall and Dome) and a seated auditorium (all of which are very loud, so take or buy ear plugs if you care about your hearing). There’s also the tech side in the multi-storied Escher-esque garage space, where you’ll find Virtual Reality visors, iPads controlling steampunk machines and, if you looked closely, PC Music’s QT and SOPHIE trying to work out how to use a recently released synth (maybe start with the songs first, eh?).

The tech element bled heavily into the Sonar Hall shows, as every show boasted ‘Live Visuals’. I’ve still yet to really understand what that means. Lee Gamble’s sound design was complemented by Dave Gaskarth’s geographic visuals where landscapes shattered and rotated. Power cuts plagued the set but the desired effect was achieved.

Local boy ñino’s visuals were a little less inspired (being heavily edited snippets of Hitchcock’s To Catch A Thief) but he was a little more keen to build in some recognisable melodies, and I was left wishing I was watching it about seven hours later. I’m kicking myself for missing industrial noisemaker Vessel as he was a highlight for my cohorts, who were citing dramatic hammer-horror styled visuals to ‘Red Sex’ for special attention.

The two highlights from this breed of performers were undoubtedly Arca (flanked by Jesse Kanda) and Holly Herndon. Arca’s body image bending was particularly refreshing amid the general fixation on young girls which many visuals seemed to focus on; computer rendered, distorted and contorted female forms twerking were juxtaposed with Arca himself twerking and topless in a suspender belt and long socks.

Making this exhibitionism worthwhile was the impressive sound the Bjork collaborator manages to create. The red curtained room felt like it was about to get swallowed up by the winding keys and growling bass. The show was also given some light relief with one song being interpreted by a foetus in space playing a Ring of Jupiter styled keyboard. 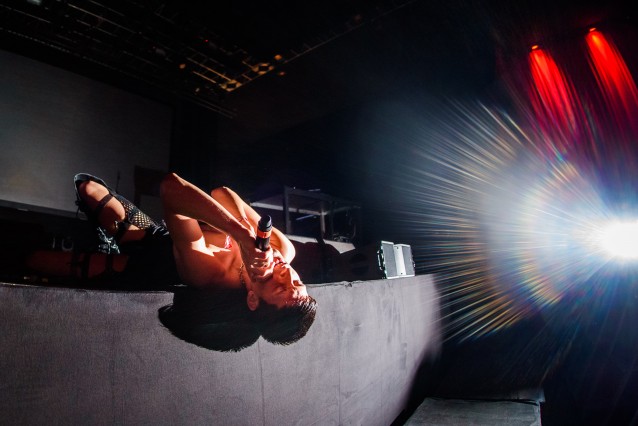 Two days later, Herndon performed in the auditorium with a friend assisting with the visuals and another adding dance moves and live vocals. It started out heavily oversubscribed, before her very stylised and text-orientated performance weeded out the confused from the fans. Answering questions texted in on the backdrop (I’m not sure how pre-organised these were), her written shout-out to recent Barcelona mayor elect and anti-eviction campaigner Ada Colau received the biggest whoop of the weekend from locals.

The visuals consisted of cardboard cut-out people being dragged around varied environments, including at one point a 360° snapshot of the Hall itself, all while the ever-building harmonies and samples crucial to her compositions created an intense, epic atmosphere. I presume it’s part of her continued obsession with online personas and digital worlds; I really liked her recent album but still feel as if she’s yet to put together a cohesive argument outside of her engaging interviews.

DJs are Sonar’s crowd generators though, and rotating ‘live’ shows with the decks set up on the main stage keeps the music flowing without a break and gives the boiling outdoor area a truly all day party atmosphere. However, it also seemed to be the DJs who let the side down a little. Desert seemed to be a couple that consisted of the bloke fleetingly pressing play while the girl took photos on her phone – unless you’re Andrew Fearn from Sleaford Mods please keep the phone in your pocket. (That goes to the crowd too. The shameless selfie stick marketing duo constantly mingling in the crowd thankfully looked unpopular by day three.)

Pre-Grime-time revered hip-hop producer Just Blaze’s brand of EDM bro-pleasing (gym guys had their tops off and testosterone up from the get go) proved not only that good artists don’t necessarily make good DJs, but also that Blaze shouldn’t be allowed out in public behind a set of decks. Everyone thought that ‘We Are Your Friends’ film trailer was a bad joke, but this particular set made it look like a realist piece of kitchen sink drama by Mike Leigh (minus the nice people).

In good news, long term 808 synth-botherer Arthur Baker managed to create a solid hour of disco and house that had a bit more muscle and brains to it.

The highlight in this category was undoubtedly Bristol’s Om Unit at the Off-Sonar ‘Jungle Ting’ night, which took place at steps-heavy Alice In Wonderland-styled back-door venue Upload, situated within fake-village-cum-Disneyland Poble Espanyol. The solid two hours of deep drum’n’bass and jungle breaks sounded complex and was completed with finesse, Unit also managing to look like he was having fun while at it.

The promoter told me this was the only venue in Barcelona that would let him bring in a Funktion One sound system and play drum’n’bass, which seems to be a recurring theme and always strikes me as a little unfair as, other than looking like they’ve just finished a two day cider session, drum’n’bass fans always strike me as just passively stoned and pretty friendly. Importantly, it’s also quite easy to actually dance to, and the DJs don’t seem interested in much other than getting you dancing.

For us Brits abroad there were always going to be two main highlights on the line up: namely the recent grime resurgence showcase featuring both Novelist & Mumdance and The Square, and the dual performance by Skepta and JME.

Mumdance’s set was fun and varied, skipping between hardcore and techno at a ferocious pace before edging into grime territory, before the eighteen-year-old Novelist emerged and the uber-young talents of his crew The Square were welcomed by the bubbling crowd. The crew bounced around with an unstoppable and addictive energy, with the minimal shots of ‘1 Sec’ ringing the loudest through the engaged audience.

According to every music site it’s Skepta and JME’s year, and on the basis of their Saturday set it would be hard to argue otherwise. Opening with the unstoppable ‘That’s Not Me’, the Brothers Grime worked in perfect sync, JME’s up front enthusiasm and perfect flow complementing Skepta’s more restrained but equally charismatic persona. Dipping into their respective catalogues (JME was showcasing tunes from his recent Integrity LP, with ’96 Fuckries’ being a highlight) and Boy Better Know favourites such as ‘Feed Them To The Lions’ and ‘German Whip’, by the time Skepta’s ‘Shutdown’ came into the view the skanking masses were a huddle of sweat and massive grins.

If the British love an underdog then this lot are our new favourite sons. While a lot of people have commented that Novelist had a more relentless physical energy, possibly due to his age, Skepta and JME’s ability to craft a set and their more diverse lyrical elements, perhaps due to their age and experience, meant that the brothers won it for me.

Making our way to the By Night event for the first time on Saturday post-Skepta, the most overarching emotion was our reaction to the sheer scale of the aircraft hangars the late night shows take place in. The thud of bass rattles the walls and the vast swathes of people (some doing better than others, as the guy asleep on the floor at 2am could attest to) makes the By Day attraction seem positively quaint.

It’s here we stumbled right into the delayed Duran Duran set. If going from grime upstarts to the ’80s biggest cocaine enthusiasts sounds awkward, that’s because it was, up until the band remind you just how far their reach into popular culture goes. From the shouts of “Notorious!” to the funk swagger of ‘White Lines’ and the theme tune to ‘A View To A Kill’, if there are two genres Sonar 2015 made me rekindle a bond with it’s drum’n’bass and camp ’80s pop music. Take that techno.

Flying Lotus was still on his You’re Dead! show, which means you get more jazzy interludes than perhaps is digestible past midnight, but also means you can treat yourself to his engrossing visuals, which wrap around him and his semi-transparent box.

The Chemical Brothers didn’t just pull a crowd, they pulled the crowd, as what seemed like most of Sonar piled into the main room for their set. If heritage acts are good for anything it’s whacking out the crowd-pleasers and getting hands in the air – catching ‘Setting Sun’ definitely put me in a good mood. I’d take drum-heavy ’90s pillhead music over the previous night’s migraine-inducing Skrillex EDM any day.

Spain’s answer to Chief Keef, Pxxr Gang, certainly acted the part, taking pretty long tokes of pretty wide spliffs while grinding against trap beats. I’ve got no idea what they were saying and it’s almost certainly music designed to be heard coming out of mobile phones, but the rhythms and the delivery sounded authentically grizzly.

Finally, I want to make an apology to DJ Detweiler, who I previously claimed I’d only be able to stand ten minutes of. In reality he’s the funniest music act I’ve seen since I first stumbled across Frank Sidebottom, insane spiralling meme projections and all.

And that was Sonar: we managed to avoid sunstroke and drank our own body-weights in Estrella. Next year I look forward to a grime MC performing to ‘Live Visuals’ – the final frontier, surely? 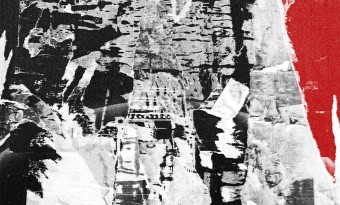 The Soft Moon write noisily abrasive, angst-ridden songs with titles like 'Dead Love', 'Die Life', and simply, 'Wrong' - so why is everybody smiling?
Read More