You remember that scene in Trainspotting where Renton gives Spud a wrap of speed before a job interview, so that he manages to appear enthusiastic about wanting the job but deranged enough to not actually get it? Well Jape’s latest video basically starts off like that, only with the speed replaced with LSD and the desire not to get a job replaced by the impossibility of getting any kind of employment in post-recession Ireland. Jape already have a habit of producing eye-catching videos and songs about getting high as a kite, but here they’re combined to excellent effect.

We follow our protagonist (brilliantly portrayed by Stephen Jones) as he prepares for yet another inevitable disappointment. His suit is crisp, his face is clean-shaven… and his gullet is full of acid, dropped just in time to start taking hold as he walks into the interview. Before long he’s sweating like a dyslexic on Countdown. Then he’s ranting with an increasingly wild look in his eyes. Then he’s scooping up handfuls of the seaweed that his poor brain has decided the interview room is full of. He leaves without the job, but with a lot of confused stares aimed at his back as he staggers out.

Luckily his flatmate is there to provide a stabilising cup of tea, and what follows is a 12-hour trip through Dublin distilled into three minutes and accompanied by the band’s silvery electro-pop, which sits neatly amid the likes of Hot Chip and Fujiya & Miyagi. Our hero dancers with a pensioner in an abandoned building, finds Nemo at a funfair, loses Nemo in the Liffey, and meets the girl of his dreams at a house party. Although by the end it seems like he might have literally dreamt her.

It’s shot beautifully (particularly the beach shots at the end) and the song accentuates the atmosphere of extemporaneous euphoria. While we wouldn’t necessarily recommend Jape’s job interview preparation plan, it doesn’t half look like fun. If you do feel like recreating these scenes at home then get yourself a copy of the band’s new album This Chemical Sea, released next week on Faction Records.

BC Camplight - You Should've Gone To School 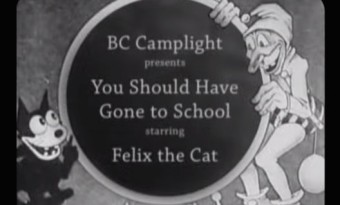 Bella Union's Mancunian troubadour BC Camplight meets a pissed-up Felix the Cat, in a clip that will hopefully set a lasting trend for music videos in 2015...
Read More