Modern animation is dominated by the shiny slickness of CGI. Which isn’t necessarily a bad thing – it doesn’t matter that all the human characters in Toy Story 3 look more plastic than the toys, for instance. Yet there’s something about stop motion and classical animation that holds a special kind of magic.

Part of it, perhaps, is sheer awe at the time it takes to animate in the traditional sense. A laborious procedure that would drive most of us insane with boredom (this Fast Show sketch always stuck with me), as a sheer feat of patience it deserves plaudits. However, there’s something about the ‘realness’ of some classical animation – the visible pencil marks, paper creases and ink splashes – that make it feel truly alive.

That’s certainly the case in this video for Norwegian electro-pop trio Atella. A collaboration between director Chris Ullens and animator Bill Porter, it mashes a series of vibrant sketches together to create a blotchy, scratchy, shifting world that you can’t take your eyes off.

Partly because you never know what’s coming next. The animated lip-synch scenes are impressive enough, but then come the frozen mushroom clouds, the fiery dandelions, and the boxers suddenly sparking out opponents. The imagery is as unpredictable as it is fluid, while the visible paper ripples in the background make it feel like everything’s materialising on the surface of a dry white lake. It’s flipping lovely.

As is the music. Tender strings mix with wide-eyed synths to create a strain of psychedelic electronic pop that recalls last year’s ‘Candy Tongue’ single by Trentemøller. The shift to a major key at the end is a bit cloying for my taste, especially when contrasted with the closing visual scenes of rioting and a cheetah being shot, but the overall multi-sensory effect is still bewitching. Forget Monsters Inc., this ‘Monster’ will do us for now. 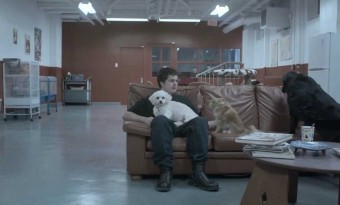 Part music video, part mini documentary, the beautifully directed 'Hers' focuses on the role played by music in the life of an Asperger's sufferer...
Read More