By the time Mac DeMarco takes to the stage at the Roundhouse, the anticipation is crazy. I know I’m excited, having missed a couple of opportunities to see DeMarco previously, most recently at this year’s Primavera Sound Festival due to other commitments (the FA Cup final). Annoying that these festival organisers never think of the real fans.

But anyway, the reaction is electric for someone who wondered how so many people even knew who he was. It’s something that he’ll have to get used to. The chants of “Mac! Mac! Mac!” were pretty sweet, but when he bends over past his amplifier after the opening song and girls are literally screaming and crying “I love your arse!”, you know something has turned.

To look at he’s a cap-wearing, gap-toothed, over-sized t-shirt goofball. However, there’s something about his slacker vibes which has clicked, and it was no different with me. Having recently reviewed his latest mini-album, Another One, for The Monitors, there’s something extremely endearing, dare I say enchanting, about his persona and most importantly, his music.

The band open with the almost breezy ‘The Way You’d Love Her’, a cut from the new release which creates a rousing sing-along, but it’s when they play his forever cemented classic ‘Salad Days’ that it turns to pandemonium. The ‘la la la la las’ sounds like an anthem for drop-outs and lazybones as DeMarco reasons: “Oh mama, acting like my life’s already over / Oh dear, act your age and try another year.”

The set veers from new to old to covers, and the contrast between the material is actually pretty stark. On one hand you have ‘No Other Heart’ which sounds mature, sad and resigned – “For once her heart belongs to another, and no other heart will do.” Then he bombs into an upbeat oldie such as ‘The Stars Keep On Calling My Name’ from album 2 which creates a swaying wave in the crowd, sweating bodies surging too and fro, before retreating back into another downbeat, sombre number like ‘Another One’, which is almost like a funeral march in comparison.

The songs clearly exhibit craft and song-writing chops, but together in this order they do lose their flow. ‘Cooking Up Something Good’, with its funk guitars and stirring chorus is followed by ‘Ode to Viceroy’, which is the best elegy to a cigarette brand I’ve ever heard. However, next to ‘Without Me’ it feels like another band playing around with their ballad-friendly synth strings and self-pity.

Thankfully things pick up towards the home straight with ‘Just to Put Me Down’, which is the best song Steely Dan never wrote. Its slide guitar sounds deliciously ’70s as DeMarco repeats the title refrain over and over, before guitarist Andrew Charles White drops a finger-plucking guitar solo breakdown which you sort of never want to end. ‘Freaking Out the Neighborhood’ will always be a highlight and even provided an opportunity to introduce the new keyboardist (“First show outside of North America for Dan!”). He’s passed through the crowd like delicate Fabergé egg. 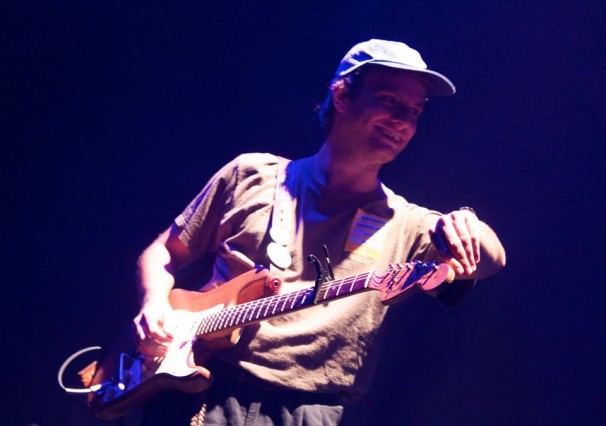 The traditional set closer ‘Still Together’ is emotionally charged; elevated from the acoustic version on the record it sounds fully realised in full band form, and although he’s lost his ability to hit some of the high notes during the chorus falsetto (damn cigarettes) it still retains an emotional immediacy. It’s also fairly exciting when DeMarco himself decides to crowd surf. Unfortunately he’s not a small lad and the crowd, mostly consisting of teens and hipsters, mean he isn’t, let’s say, well supported. In fact there’s a moment where he disappears altogether but thankfully emerges to finish the song (and the main set) with magnificent and fitting applause despite the mix-and-match setlist.

The encore consists of Mac DeMarco’s trademark covers section, which I think is a great shame as they have about 25 minutes until the curfew; to hear a 20-minute version of Metallica’s ‘Enter Sandman’ mixed with Deep Purple’s ‘Smoke on the Water’ (easiest riff ever) and then back into ‘Enter Sandman’ is a slight disappointment. The crowd around me definitely loses interest waiting for something else to occur, especially as they haven’t performed other fan favourites (or should I say, my personal favourites) ‘Blue Boy’, ‘Goodbye Weekend’, ‘Brother’ and ‘Passing Out The Pieces’, which would leave things on a sweeter note. C’est la vie.

There’s a moment when Mac DeMarco sits by the drum-kit with his band-member disciples around him, as if he’s chairing the Last Supper. It looks quite fitting, as for someone who previously felt uncomfortable with the attention he’s received, he looks totally at ease in his new role as leader of the slacker society.

Smash It Out (Again) @ The Brixton Windmill 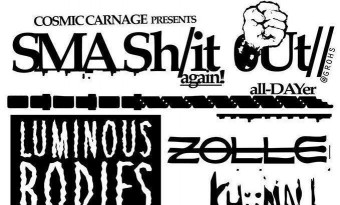 Devilish DIY promoters Cosmic Carnage battled with some truly evil luck to get their Smash It Out all-dayer to happen, and we're sure glad they succeeded...
Read More