Within about twenty seconds of The Curved Line I knew it was going to go down a treat. The latest from jazzy electronica producer Kelpe follows the trajectory of last year’s

Fans of the genre will already know the name though; Kel McKeown has been producing records under the Kelpe moniker for around a decade and is one of the most respected students from the school of Aphex Twin. But fear not new arrivals, this is not sub-par ’90s retroism. The Curved Line, much like the previously mentioned records, builds on Kelpe’s reputation as an intricate arranger and features all the warmth and energy needed to ensure The Curved Line is as immediate as it is modern.

Opener ‘Doubles Of Everything’ sets the tone: low squelches of bass, crisp percussion, vocal samples in the mid distance, all brought to life by big, bright synths. We’re then quickly escorted into ‘Chirpsichord’ and ‘Calumet’. The former has a more digital tone and wouldn’t sound out of place in an otherworldly platformer game, while the latter kicks you into dancefloor mood as a pacey 4/4 beat pushes the other sparse but intricate elements into place.

The ‘jazz electronica’ tag needs to live up to its name at some point though, and Kelpe first shows us his more cerebral side on ‘Sick Lickle Thing’. It’s a slowly forming track that takes previous elements and adds a flourish of drum rolls to proceedings. If you’ve ever enjoyed Caribou’s kinetic live sets but felt his records are a little glossy, head straight here for a bit of at-home relief. Recording live drums with long-time performing partner Chris Walmsley and Stereolab’s Andy Ramsay no doubt helped bring to fruition a lot of the necessary human warmth that can be found throughout the record, particularly in ‘Sick Lickle Thing’ and then later in ‘Canjealous’.

Mid-album high point ‘Valerian’ has the sort of rousing, never-quite-there epicness which makes you think him and Holly Herndon should probably collaborate, while the darker tribalism of ‘Drums For Special Effects’ makes you cue up Clap! Clap! and Romare on your media player.

As is often the way with these things, the finale isn’t a blustering bringing together of the previous nine tracks but a palate cleanser. The beat on ‘Incantation’ disappears less than halfway through the track, leaving just the soft, icy keys to riff over shuffling, distorted sounds and slightly grimacing chords. The last twenty-five seconds is a whisper, a bit of breathing space. Then it’s straight back to track one. 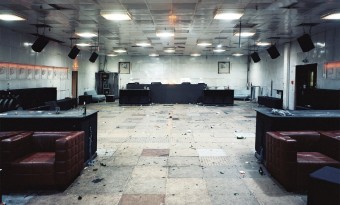