It’s obvious from listening to Pascal Terstappen’s creations that he is a man in love with music. Take the Dutch producer’s recent For album, for instance. On the surface there are enough pretty flourishes and sunshine gloss to charm the casual listener, and enough steady beats to make it suitable for the dancefloor too.

However, it’s when you listen closely that you realise the sheer work that’s gone into it. The tiny sonic touches, tweaks and details that spill out of your headphones are a generous reward for dedicating your attention to it fully. Just listen to the whirring machinations of ‘Like You Do’ or the precisely placed hi-hats on ‘For Lovers’ for some enchanting examples.

He also founded rtfkt.net, where he and his friends post tracks they’ve discovered by up-and-coming producers from all over the world, some of whom have ended up on Atomnation themselves.

Taking time out from his incessant routine of playing, creating and listening to music, Applescal was kind enough to let us ask him a few questions about his moods and methods…

The Monitors: Firstly, we’d like to say that we like your clean aesthetic; For is probably one of the more refreshing electronica records we’ve heard since Jon Hopkins released Immunity. You’ve taken your more tech-y elements and worked then into some more narrative-feeling compositions – what inspired you to take on a more ‘song-based’ approach with these new tunes?

Applescal: Thank you! For this record I changed my workflow a bit. Previously I mainly used digital synths. But I wanted to do something different and decided to approach my music more in a way of using samples of other records. This worked [and was] inspiring. Also, I created most of the music on my headphones, just on the couch late at night. First focussing on just the ideas – and when that’s done, getting the sound right in the studio.

When it comes to dance music, the Dutch are more often associated with the more commercial or in-your-face side of things (Tiesto, gabba, etc…) – have you suffered from that perception in the past, and was it difficult to find a space for your music at first in Amsterdam?

You set up Atomnation in a single, frantic weekend – do you ever wish you’d taken more time to consider anything for a bit longer, or was it best to just jump in the deep end?

Setting up the label was very impulsive indeed but it led to nice things. When it comes to selecting music we’re still impulsive, though we think a lot about how to get the most out of the records we put out.

Many electronic artists and labels focus on 12″ single releases, but you seem more interested in releasing albums – why is that?

The music we enjoy fits the album format better. Also, we’d like to show what an artist is capable of when we release their music. For example, the Portable Sunsets album – that record contains some ambient, house and electronica – but it all connects. Something you wanna listen to from the first till the last minute.

What would you find more satisfying – a club appearance where you have the whole room dancing, or a detailed review from someone who has clearly been moved by your music on a personal level? Is there an environment that you feel your music is particularly suited to?

I really like the joy of DJing but can also be happy when I read a review that is spot on. I think my own music works best when you listen to it alone on your headphones and it takes you on a trip – that’s what I tried to bring on For.

Your music, particularly on For, is very accessible on the surface but reveals more complexity the closer you listen. Do you ever worry that a lot of that depth might be lost on the casual listener, or if it’s consumed as ‘background music’?

I don’t really worry about it. When the record is done, it’s done. Then it’s for the people. They should listen to the music in a manner that works best for them, they can listen to it attentively or as background music.

Who are the older producers and sounds that you have in your record collection?

The usual suspects… Apparat, Holden, Boards of Canada, Sasha, M83, Michael Mayer, etc etc… Later on I was involved in the blog rtfkt.net and discovered a lot of unknown talent and new styles just by digging on the internet. I got introduced to music of Baths, Chrome Sparks, Bonobo, Shigeto, Jacob 2-2, etc. And some of the guys that are currently signed to Atomnation.

We’ve debuted a lot of artists so are always busy looking around for new talent. We’ve now started to work with Polynation – a new act from Amsterdam. They are two guys and use real drums and lots of analogue gear. They have a great live performance as well. Their EP will be released in November and these guys should be on your radar. And of course we hope to continue to bring out music by all the artists that have released on Atomnation so far. 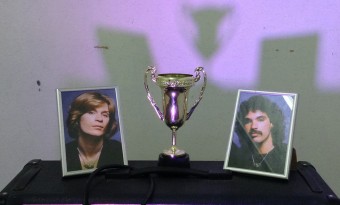 This is already looking like one of the strongest years for albums in some time, and as we reach its halfway point we feel like celebrating - with the 25 best albums of 2015 so far...
Read More