In the two years since Anenon last released a long-player (2014’s superb Sagrada), he’s gone from soothing the listener to making sure that they sit up and take note of what’s happening in their headphones. The L.A. producer’s latest is inspired by the necessity of and obsession with cars in his hometown – unsurprising then that more than once during Petrol you feel like a deer caught in headlights.

This isn’t an American reproduction of Autobahn however. Where Kraftwerk were seeking to represent mechanical structures in their music and in their performances, anything as indebted to jazz as Anenon’s music will never truly be able to reflect that feeling. The use of acoustic instrumentation (and therefore the interruption of ‘real life’ in the recording process, which is much less obstructive in recording techniques that don’t necessitate the need for a microphone) adds warmth to the sound; this sensation is heightened by the light touches of musique concrete in a handful of the tracks. Taken along with the fact that jazz exists to be playful and colourful, as opposed to motorik, and you’re left with a genre that really won’t work conveying über-realism.

Because of this Anenon seems much more interested in exploring the differences between people and machines than our German friends. The opener, ‘Bodies’, for example, is the closest thing to a continuation of Sagrada than anything else here. A soft but ruffled saxophone lament plays over piercing strings – it feels like the sad part of a film – before field recordings of traffic soon break the spell (or add to it, depending on which way you look at it). By the end we’re left with a flangalating synth, rushing to the song’s finale.

‘Lumina’, a word for the inner open spaces of your blood vessels, brings us to much more frantic territories than we’ve previously heard from Brian Simon. Oscillating electronics intertwine above a marching, ping-pong beat. Though Petrol isn’t as interested in club culture, anyone who enjoyed the slow, unravelling, epic proportions of ‘Open Eye Signal’ by Jon Hopkins will find plenty to enjoy here.

The central five tracks of Petrol take us to much more skittering, Aphex-inspired corners of alternative electronic music. The cover artwork focus on a saxophone is actually a little bit of false advertising, as the central instrument of focus on ‘CXP’ and ‘Machines’ is the drum kit. Especially the former, which showcases the juxtaposition of light melodies and morose saxophone hums that is central to Anenon’s compositions, although now those elements are somewhat overcome, albeit briefly, by rhythms more suited to a Metalheadz release than an artist usually found in an art gallery. Given his penchant for wielding a baton nowadays, I wouldn’t be surprised if Goldie could hear here that tasteful symbiosis of classical and drum’n’bass that he was going on about a while ago.

‘Petrol’ sees the journey come to a dramatic end, crescendoing over seven-and-a-half minutes, fusing rapid-fire percussion and Simon’s itchy feet saxophone playing, before turning the ignition off and allowing the traffic to zoom back into view and the body to leave the vehicle.

There are many artists playing with the music-in-art-gallery idea, and many people dealing with genre and style fusions, but with his third album Anenon proves once again that he is one of the best at actually realising concepts into albums that work at an aesthetic and entertaining level, alongside making sense at specialist, ticketed events.

The adage goes that it’s better to travel than to arrive – after listening to Petrol, I’d have to agree.

All Them Witches - Dying Surfer Meets His Maker 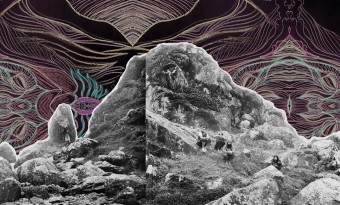 The new album by Nashville four-piece All Them Witches is a psych blues odyssey that twists and turns like a winding mountain trail...
Read More