The web-utilising Davic Nod might not be one of the big ‘headliner’ draws at 2015’s Sonar festival, but the Barcelona born tech head is certainly one of the more interesting characters at this year’s +D series.

Focusing on the ethereal end of electronica, obsessed with technology and utilising social networking to build music and sound, the Berlin-based producer caught our attention enough for us to reach out and have a chat with him about his recent Thalamus Lab project and the 50+ collaborators he worked alongside (albeit remotely) to create the label’s first release, ‘XSL’.

For the Thalamus Lab project launch you received samples from a huge range of artists. Could you run through a couple of them and how they found out about the project?

Some found us and we found some of them as well. I met Toko Okuda at the premiere exhibition of her huge instrument. She created like a mix of huge harp and organ. The name is Arpasauro, mixing the words harp and dinosaur in Spanish. She recorded the opening concert and I asked her if she would like to share some samples of it and she gladly accepted.

Hen Lovely Bird is the performer of Thæta, she contributed with a recording of the malfunction of an audio captcha. We also used it in the performance.

We also received very nice stuff during the call for sounds. For example field recordings from Perú by Millie Wissar, underwater recordings in Antarctica by Daniel Blinkhorn, the recording of the MF6BB sound installation by David Flood… There is a detailed pdf included in the download. (We added a link for those who are curious and want to read it without downloading the sounds.)

What brought you onto the idea of incorporating faceless interaction into the musical process?

Some years ago I wanted to start a label project, something like a net label. At that time there were already a lot of net labels, too many… I was thinking how could I make something special, different from the majority. I was interested in developing a collaborative community around the local alternative music scene. I wanted to collaborate with other musicians, exchanging and mixing ideas and combining skills to get top results.

I organised some meetings in Barcelona with local musicians to talk about doing something all together. However, soon I realised it was going to be too complicated to gather all local musicians for a project and I got a bit discouraged; I have always been too idealistic. I asked for advice from the multimedia culture activist Antònia Folguera and I remember perfectly one thing she said: every two or three years someone comes with the idea of doing something all together to help each other… Anyway, I really wanted to collaborate with people. I would have to rethink my ideas to make something that could work out.

I started to think on a massive online collaboration. I got enlightened looking at Freesound.org, a huge collaborative database of free sounds. It was a nice example of what is possible when people joins forces on the internet. The more people, the more fun! A collaboration involving hundreds of people would be interestingly unpredictable. At Thalamus Lab we are curious, willing to try and open to different possible results.

I was just reading today about the new Holly Herndon album and her attempts to fit social networked life into her music; this label project seems to be very much in that lineage.

From what I have read in this interview, Holly is not interacting with people at all, just taking sounds from her browser while navigating on the internet. Thalamus Lab follows a different process. It is about putting together people to participate in a collective production. It is about sharing the experience, sharing sounds and ideas.

We announce open calls on the Internet and also invite musicians personally to participate. We collect little contributions from each one and share them with everybody. This benefits us, benefits participants and may benefits others, like people working on sound/music/audiovisual projects who has found some stuff useful in our XSL sound collection.

Coming from Barcelona, what drove you to Berlin? Was the music scene more suited to you there, or did you just want to experience a cold winter?

In Berlin there is more space and more demand for alternative music. Berlin is a nice place to be for music lovers and musicians, with a huge range of concerts and parties and a pretty big underground scene. I came the first time to visit a friend on vacation, it was decided spontaneously. Ten days before my arrival I tried to get in touch with some local promoters and it worked out. My first day in Berlin I played at Impulse party in About Blank. A week later I left thinking that I would have more opportunities here…

Another reason why I am in Berlin is to finish my studies at the Technische Universität, where I found a place for spatial audio research. I’m doing my thesis in a 3D audio lab, in one of the three audio departments.

Could you explain a little about the audio-visual project you worked on recently?

Thæta is a movement-based performance about the liminal boundaries of the conscious and subconscious mind. The performer is wearing movement sensors and the data is used to manipulate the audio and the video. The Stratofyzika collective asked me to collaborate with them for their third piece, and I used the XSL as main sound source. The full video of our last performance at Cynetart Festival in Dresden will be online soon.

You recently did a podcast for a show out in Seoul, how did that come about, and how do you go about deciphering which pieces of minimalist or experiment music you like or don’t – do you listen out for specific techniques or key sounds?

My friend Chang curates this Podcast for Dark Matter. I met Chang in Berlin, he is a great guy and a great artist. He also contributed to the XSL with two binaural field-recordings. For this podcast I mixed stuff created during 2014 with the XSL, all unreleased. Regarding the question, I just listen to pieces and feel something or nothing…

Rock was largely built from jam sessions and people sharing immediate experiences, electronic music is increasingly about individual experience, and loneliness in some cases. Do you think that progressive music in general will continue to focus on the individual and is mass populism too ‘stupid’ in your opinion (I’m thinking of the EDM and the superstar DJ scene)?

In April I was invited to the MusicMakers Hacklab at ICAS Festival in Dresden. We were a group of 10 people working intensely during a week and practising for an improvised show we played at the end of the festival. Jamming with other artists was something special. Each of us brought something like custom-made instruments, patches, systems…. Inspiring, I really enjoyed it! There will always be something individual and something social in music.

The superstar thing is stupid, of course.

You’ve done quite a varied range of live shows, including performing from an iPad on a bus. What have you got planned for your upcoming shows?

I am working on a tool to create and play spatial music in any possible audio reproduction system. I would like to play quadraphonic sound and in general any multi-channel system. After finishing my research I also would like to play at the lecture hall Wellenfeld H104 of the TU Berlin. It has a large Wave Field Synthesis system consisting of 2704 speakers, 16 computers and 832 audio channels.

Like music and tech? Check out these recent Monitors pieces too…

Why the Global Release Date is an opportunity to change how we promote music... 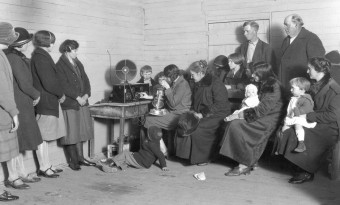 With fans frequently having to wait eight weeks before they can buy or stream a track they've heard on the radio, does the Global Release Date present an opportunity to revamp promotional campaigns in the UK?
Read More