Manchester’s Spontaneous Rhythm, run by Geordie John Howes, was an interesting electronica curio label – releasing a range of international artists and even putting together a bespoke sample package from hard to find analogue equipment over the past few years. So when Howes got back in touch saying he was starting a new project with long-time friend and equipment-noodler Michael Haddon in order to release a debut collection of work, we were obviously intrigued.

Thankfully, the fifteen tracks which form Auricular Palimpsest didn’t let us down. Formed of previously hidden away efforts from hard drives expecting to be replaced at some point, as the press release explains: “A palimpsest is a used scroll or manuscript in which the original text has been scraped off or removed in another way in order to be replaced with new text.” Born from a heritage which includes Berlin’s industrial spaces, Detroit house, and ’90s rave’s more leftfield experiments, the warm production sets the scene for heavily edited vocal samples, occasional full throttle percussion, trippy acid synths and the groove of a particularly heavy MDMA session.

‘Polyhistor’ – an LP highlight and a track which has already been made public on the label’s Bandcamp page – is a stomping 4/4 journey through all of the above. Elsewhere the likes of ‘Alone In The Morgue’ and ‘Jim Davidson’s Funeral’ are more refined, minimal affairs, featuring skittering drums and offbeat kicks.

We’re excited to be able to premiere ‘Confidence Trickster’ on The Monitors, a track made alongside Howes, and another example of warm, fluctuating tones wrapping themselves around a steady industrial beat.

While the press release and quotes around the production techniques all seemed very impressive, there was a part of my brain that was going “eh?” (the line “‘Flutterbug’, is Daydreaming + sampling into ∞” particularly left me stumped.) So I decided to reach out to Haddon on e-mail to get enlightened…

I was told you design ‘autonomous music making software’. How did you get into that, and was that a technique you used for this particular set of tunes?

I think the method of making music that modern music software forces is simplified to the point where it starts to influence the music that you make. I wouldn’t say that the software is restrictive in any way, many great albums have been made with native DAW instruments and effects (‘Noi No’ by Madteo is a prime example). However, the most popular computer music stuff is all made by staring at a grid, making adjustments and listening back to the same thing a million times. It influences the way that you compose from sound design to structures and subconsciously you conform to structures that software designers impose.

I wanted break out of that and push my boundaries so I got into Max/Msp which lets you build your own instruments, effects or just about anything you can think of. There’s a very steep learning curve but along the way you can stumble across little gems of audio-mangling magic, which you normally wouldn’t encounter. After a while it clicks and you realise that you can actually build anything you can imagine, there’s really no limit – if I want something I just try make it myself. These tools lend incredibly well to generating unpredictability, which I am a big fan of in electronic music. Most of these tracks began as experiments with instruments/effects or sequencers I have made.

Ok, so the process of creating the music is a lot more fluid in this environment… have you heard about the technology which allows people to make music with their minds? Making new, interesting sounds is all well and good, but there’s definitely some much needed structure in a few of the tunes on the record, how do you go from that initial burst of experimentation to forming a track?

Yes! I love all these new advancements in music technology. Since the dawn of time people have always made music with whatever was available at the time and I think it’s only natural that we carry on pushing the boundaries with modern technology. Maybe I’m a little bit fickle in that I still prefer something to sound good rather than to give high praise to something which is just an experimental/technical feat but I still very much appreciate the effort.

Track arrangement is something I’ve struggled with for a long time. I think if electronic music is being made for other DJs to play in a club, then there is a definitely a tried and tested template that often works. For anything else, the options are endless because of the abstract nature of electronic music. My current process is to jam for an extended session and as long as something fun and interesting is happening then I am happy. I go back the next day and listen to these ridiculously long files and chop out the stand-out parts and try to glue them together somehow. Sometimes it works… sometimes it doesn’t. This way is much more exciting for me because the results are more varied than if I wrote with any sort of plan in mind.

On this particular release, I understand they’re recordings from a while back, when did you put them together and how did you go about putting them into an album format?

Most of them are from the past two years but there are some more recent additions as well. The album began to take form around christmas last year when I sent a bunch of tracks to John Howes. He’s been amazing at helping and encouraging me to actually finish things. I’m a prolific doodler but I often give up on an idea when it runs out of steam or I get bored of it. I feel like that’s one of the major drawbacks of working with computer music, knowing when to stop and figuring out when a track is ‘finished’. I have this really bad habit of deleting entire projects when I get frustrated or something like that… it’s terrible. John gave me some great advice and he’s responsible for arranging these tracks in an album format. I never really set out to make a full album, I just made tracks in my spare time for fun and it’s developed quite naturally from there. I’m very lucky to have supportive friends.

Although you pieced together the tracks and the album as a whole over a long period of time, is there a central theme which brings it all together in your opinion?

Maybe not consciously but over time you develop a certain set of methods to fall back on and you inevitably end up sounding like yourself. I suppose the general theme is to create a homage to all the music I love while still hoping to sound original. I think each track roughly interprets and references another genre that I love but in a twisted way.

Who currently or from previous decades do you take inspiration from in terms of the technical, experimental side of things?

I really like the spirit of people like Prostitiutes, Container, Basic House – they don’t compromise on rules set by the genre of music they make, it’s a more DIY approach towards doing stuff for themselves and not for a market. A lot of modern club stuff sticks within its own boundaries, it’s totally inoffensive and crowd-pleasing but ultimately dull. It’s really refreshing to hear these guys doing something original with a punk-tinged ‘take it or leave it’ attitude. Same goes for bands like MBV and O Yuki Conjugate who think of themselves first and if other people catch on then that’s great – that’s a similar approach to the one I take. 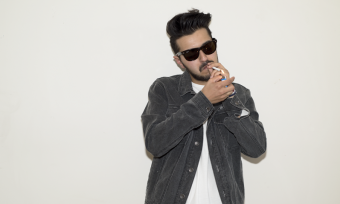 Melbourne electro-pop miscreant LA Rocksteady gets down and dirty on his '1987 EP', a distorted, pixelated thumper that evokes the heights of Ed Banger Records...
Read More