It’s somewhat ironic considering their name that Liars make some of the most honest rock music going. Not in the real ale-drinking, Total Guitar reading, ‘call this music? It’s all done on a computer’ utterly fucking tedious idea of rock honesty, but a following-their-instincts-and-sticking-to-their-principles honesty. Exhibiting a slavish devotion to their collective muse, they’ve even gone as far as concocting Ten Commandments for musical creativity, from the fiercely independent “Thou shalt avoid studios and record it thine self” to the somewhat less fiercely independent “Thou shalt listen to Daniel [Miller, legendary boss of Mute Records]”.

To stop themselves getting stale they even force themselves to relocate after every two albums, with each change in scenery bringing with it a change in sound. From the thrillingly riotous They Threw Us All in a Trench and Stuck a Monument on Top to the droning, clattering, possible career high of Drums Not Dead, they’ve constantly striven to challenge conventions, not least their own. So it’s fitting that the two tracks they released as free downloads recently, ‘I Saw You From The Lifeboat’ and ‘Perfume Tear’, both sound completely different to each other. Forget Liars, Contrarians would be a more apt name…

Last year’s detour into more electronic modes and methods on sixth album WIXIW added a crisp new layer to the juicy avant-rock onion that is their music. It also led to them spending a couple of recent weekends in Barcelona, with the new departure in their sound seeing them booked to play last month’s Sonar festival as well as the previous month’s more indie-centric Primavera Sound. We enlisted Josep Xortó, singer in electro-pop group Stand Up Against Heart Crime (and steadfast member of The Monitors’ Catalan wing) to track down Liars frontman Angus Andrew and ask him a few questions…

In your ‘ten commandments’ you talked about approaching new albums with the attitude: “Let’s sink the ship and find something else to make music with”. What does this bode for your next album?

Well what it means is that, you know, each time we make a record we feel like it’s an opportunity to kind of start again and approach it like we’d never made any music before, which keeps it really fresh and interesting. So for the next record, I don’t know…it’s probably going to sound different to the last one is what that generally means! So maybe a bit more intense…

WIXIW feels like your most personal and accessible album. Is there a temptation to follow it with something completely impenetrable?

Yeah, the hard thing for me to figure out is what is accessible to people, you know? I’m not really good at figuring that out. Because to me this last record was one that I would’ve thought was inaccessible, so it’s difficult for me to figure out or decide what people will find easy to listen to or not easy to listen to. Yeah, maybe WIXIW was a bit more personal, so this one will be less, maybe.

So you find a surprise in each album?

Yeah, when people listen to it I’m really shocked by what they say. Our label guy Daniel Miller said something like that, that it was accessible, when he first heard it and I was like “really?”. I would not have said that.

What can you tell us about the two new tracks you just released? “I Saw You From the Lifeboat” is pretty abrasive, whereas “Perfume Tear” must be one of the gentlest things you’ve done…

Heh, well I mean it just goes to show we’re a bit schizophrenic! Those two songs were just really quickly done, pretty randomly. The best thing that happened to us recently was that we had time off touring, and instead of just, like, going to the beach, we decided ‘let’s just make some music for the fun of it’. Normally we’re in a situation where we have to make music for the next record, and it’s great to be in a position where it’s not set up like that. It gives you much more freedom to just do whatever you want, and there’s no pressure. So that’s where those songs came from.

You’ve always moved around a lot. Where are you based at the moment? What would be the perfect location to create a new Liars album?

Well right now we’re based in Los Angeles, and yeah, you’re right, we do move around a lot. It’s basically been a situation where we make two records in a city and then we move. At this point we’ve made two in Los Angeles, so it’s a question we’re trying to figure out now: where to move to make the next one. There are a lot of places in the world that are interesting and would be great for us. One place which seems pretty easy and close by to where we are is Mexico, which seems like a whole other world but is just over the border, so that would be great. We also have a lot of friends who live in Detroit, and that’s a pretty messed up place right now and that might be really interesting. And then on top of that we’ve always wanted to try something in Asia, so maybe the Phillipenes.

Asia would presumably be the trickiest of those options…

Yeah, I think making it hard is kind of the point, you know? Sometimes that’s what gets it all going, this kind of struggle and the difficulty of it. I mean, it’s not like it was a huge struggle living in Berlin, but we didn’t speak German, and so not being able to speak the language made for an interesting sort of scenario for us.

You’re playing both Primavera and Sonar this year. Which do you prefer?

Ha, I think that I’m looking forward to Sonar just because it’s more electronic and that’s something that really interests me at the moment, and I’m not very well educated in that genre so it’s always a good thing to learn more.

Are you proud to be one of the few bands who make sense on both bills?

Sure, sure. That is nice, to be able to fit into both worlds, it’s kind of a testimony to the kind of music that we make – it’s really hard to put it in one box, you know? and I like that about what we are as a band – we don’t always have to be one thing. Maybe next year we’ll be invited to a classical music festival!

Did you get to soundcheck?

Yeah, it’s crazy, you just walk out there and it’s like – boom! But you know, a lot of festivals are like that and you kind of know that it’s gonna happen. But that’s what makes it interesting too, it can make it, like, kind of crazy, and that effects the music, and that’s fun.

Perhaps it’s that kind of unpredictability that Liars thrive on, and fires the mercurial nature of their own music; after all, songs like ‘Scarecrow on a Killer Slant’ stemmed from an unexpected and shocking incidents from Angus’ own life (in that instance a shooting outside his apartment). If that’s the case, then may Mexico be full of trigger-happy drug lords, Detroit full of, er, trigger happy drug lords and the Philippines full of snakes, scorpions, rabid dogs and an angry woman with a stick. It’s for their own good. 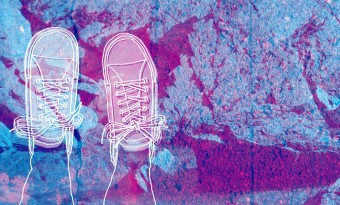 Are Warp's heroes of yesteryear (Aphex, BoC, Plaid, Squarepusher, etc.) trading on the past? Alex Allsworth presents a brief history of his warped nostalgia in order to find out...
Read More