The name of this Danish six-piece might initially conjure something whimsically fantastical in your mind; Tolkein’s Treebeard cruising through the forest with a couple of cheeky hobbits on his back for instance, or a clan of woodland nymphs. It’s fair to say those images won’t last long after pressing play on their début album Nnon, released in March this year. By the time it finishes, you’re more likely to have the killer tree from Poltergeist or the rape tree from Evil Dead putting down gnarled roots in your brain.

Yep, The Woken Trees are less a sunny Sunday stroll in the woods and more finding yourself lost in a forest after dark, painfully aware that every stick that crunches underfoot makes your location obvious to anyone, or anything, lurking in the shadows. Brought together by a mutual love of Joy Division, the band honed their skills rehearsing in a cold, damp cellar in a Copenhagen villa. It sounds like it too. Play Nnon too often and you might find a black moss starting to spread across your speakers.

Currently in the UK to play this weekend’s Liverpool Psych Fest and the Reverb Conspiracy weekender at the Shacklewell Arms, their manifestation on these shores provides the perfect opportunity to discover an album that so far has been largely overlooked over here. Likely to appeal to fans of The Soft Moon and Interpol, the atmosphere is blacker than the depths of Bauhaus singer Peter Murphy’s bowels. Drums as sharp as shattered glass pound out icy rhythms, and a hell of a lot of effort has clearly gone into the production, keeping the sonics suitably frosty

Opening track ‘Orders’ sets their stall out early on, with the guitar strings brutally bent to produce a series of sickening groans. It sounds like a factory built to manufacture pure dread. Single ‘Yells’ is even better, binding a brilliant, metallic, psycho-surf riff to a motorik beat and dragging it around darkened streets. While we’ve got a lot of love for Savages at The Monitors, this is what I expected them to sound like when I first read about them.

They’re more than a one-trick pony though. The desolate dirge of ‘Holy Water’ shows a nice tonal range, full of creepy hums and hisses, while ‘Half Hollow’ is a superb slow-burner. Unlike some of its chillier neighbours, it comes close to the borders of desert rock, radiating that sultry, cinematic thing that Lola Colt do so well. Closing track ‘Your Sun, Your Skull’, meanwhile, is beautifully bleak, orbiting round a sombre piano chord that never changes.

Between this and the Chelsea Wolfe and Midnight Davis records we’ve been constantly blasting out over the last month (look out for an interview with the latter next week), it feels like a cold wind has been blowing through the office, reflecting the changing weather. While we haven’t broken out the leather trench coats and eyeliner quite yet, there’s no denying that darker music is sounding particularly good right now. The Woken Trees are, in all likelihood, a cheerful bunch most of the time (Danes are supposed to be the happiest people on the planet after all), but when it comes to music they don’t half know how to lower the temperature. Black clouds are forming, and the nights are drawing in. Time to get lost in the forest. 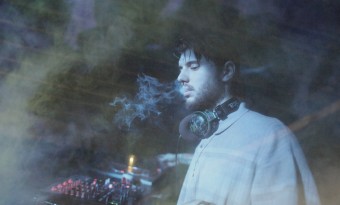 We might not know much about the pre-Columbian native communities that inspired the submerged techno of Huerco S., but we know it sounds damn good...
Read More