The good thing about writing instrumental music is that if someone asks you what it’s about, you can literally say anything and no one can question it. My new ambient drone album? Yeah, it’s about indigenous gift exchange economies in rural Cambodia. This brutal slab of minimal techno? A treatise on waste management in the NHS. My new whole-tone modern classical composition, that lasts eight days and has no time signature? A musical interpretation of themes raised in the children’s TV series, Dora the Explorer. Seriously, if I was being interviewed about making instrumental music right now, I’d be having a field day with this shit.

Huerco S., aka dance music deconstructionist Brian Leeds, has spoken extensively about how his excellent new album Colonial Patterns, released this week, is based on the history and infrastructure of pre-Columbian communities in the American Midwest. However, in this instance, it doesn’t read like bullshit. For one, Leeds clearly knows what he’s talking about, his knowledge stemming from an interest in the history of the area he grew up in. One track on the album, the smooth and seductive ‘Quivira’, is named after what Spanish explorer Francisco Vásquez de Coronado called the area of Kansas where Leeds was born, after chancing upon it while searching for the mystical Seven Cities of Gold.

Even more interestingly, Leeds claims that his compositional process is directly influenced by the architectural techniques of the natives who were already there. He expanded on this in a recent interview with FACT: “The Mississippian culture, they’re mostly known for building these giant earthen mounds. I was thinking about how these people made these things. This meticulous – I mean it was slave labour, but – this task over and over again, just to build this mound. Something actually kind of worthless, just dirt, you know? So applying this to sound. Doing something over and over again, listening to the same thing over and over again. Like shoveling. Uncovering things and covering them back up.”

Listening to Colonial Patterns backs this up. The album tirelessly circles your ears in a way that feels like it could turn itself inside out at any moment, smothering you with smudged sounds that seem muffled, grazed and glittering in turn. From a distance you can make out the jagged borders of Actress, but whereas the British producer’s albums tend to be lopsided, stuffed with disintegrating fragments, Leeds allows his elements room to breathe, perhaps a response to the expansive landscape of the Midwest. A stated love of legendary dub techno producers Basic Channel also makes sense, while it’s no surprise to learn he’s on the label of Daniel ‘Oneohtrix Point Never‘ Lopatin either.

While the potency of Colonial Patterns is heightened when consumed as a whole, there are a number of stand out tracks. ‘Skug Commune’ is a twisted take on house that gradually gets slinkier as it crystallises, the psychedelic ‘Angel Phase’ feels like digging for gleaming diamonds in the dirt, while a kick drum heartbeat thuds through the gently convulsing synths of ‘Plucked from the Ground Towards the Sun’, which is like listening to the digestive system of a slightly queasy robot. Someone in our office complained of feeling dizzy after listening to it (while another greeted ‘Anagramme of My Love’ with the exclamation “it’s making me feel strange!”), which gives you an idea of how strangely insidious it is.

Tracks like ‘Monks Mound (Arcology)’ collect the darkest shavings of techno in a fashion similar to Demdike Stare, while ‘Iińzhiid’ floats with the heavy flutter of a sunken butterfly and the snatches of melody in ‘Chun Kee Player’ are only dimly heard, as if over the din of a gale. Yet you couldn’t call this a gloomy album. The violent, disjointed percussive slices of ‘Fortification III’ are contrasted with gentle melodic droplets in the background, while ‘Prinzif is probably the best track of the bunch. Beautiful, disintegrating chords suggest a more optimistic Boards of Canada, and when the synth strings sweep in…oh man.

If there’s any disappointment here, it’s that ‘Ragtime U.S.A. (Warning)’ isn’t actually an electronic take on Scott Joplin. That’s not to denigrate the track itself mind, a gurgling, narcotic thud that feels like you’re listening to it while lying prostrate round the back of a club, with only certain elements filtering through the walls. Leeds’ admittance that he “never really danced to dance music until well after being into it” makes sense in this context. “I don’t think, “This is going to be great in a club”, he told FACT, “because I’ve never really had those experiences”.

Perhaps it’s being influenced by dance music, yet isolated from dance culture, that makes his music so distinctive. Whatever the reason, his studies in pre-Columbian culture have produced a pretty amazing creative offshoot. Some people can say a lot without words. Huerco S. is clearly one of them. 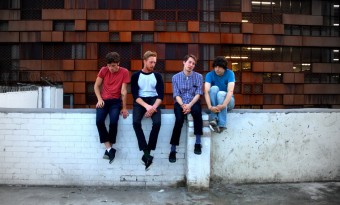 Ripping off the 60s is de rigueur for bands these days, but few put as classy an angle on it as Temple Songs...
Read More