His long-term collaborator Seb Rochford may be the most prominent face, or at least hair, in modern British jazz, but Pete Wareham’s spirited honking has been the most distinctive element of their bands over the last decade. Acoustic Ladyland, Polar Bear and Fulborn Teversham have all helped a genre that gets little mainstream attention these days cross over to new audiences, with a punk edge that’s rarely been heard since Pigbag.

While Rochford may not feature in Wareham’s new outfit Melt Yourself Down (named after an obscure James Chance album), the saxophonist’s form hasn’t suffered; only he now seems determined to cross borders as well as genres. This is World Music not in the “it sounds a bit foreign so just shove it in there” sense, but because it sounds like everyone in the entire world playing at once. There will not be a more energetic record released this year – just a few minutes in and you half expect your speakers to start dripping sweat.

Considering the pedigree of the band Wareham has assembled, the quality of the record should be no real surprise. Fellow saxophonist Shabaka Hutchings has played on The Heliocentrics’ collaboration with Ethiopian jazz legend Mulatu Astatke, while drummer Tom Skinner plays alongside Hutchings in their band Sons of Kemet, which sees him up against the aforementioned Rochford in a percussive blitz. Bassist Ruth Goller exchanged meaty riffs with Wareham on the last Acoustic Ladyland album, Kushal Gaya’s bizarre multi-lingual vocals usually augment the glorious racket of ZunZunEgui, percussionist Satin Singh’s rhythms have featured everywhere from Supergrass albums to the musical ‘Fela!’, and electronics whizz Leafcutter John is a long-time Wareham collaborator. Together their noise can be summed up, quite simply, as a fucking blast.

Wareham has stated that Melt Yourself Down is “the first project I’ve done where all the music has been written, rehearsed and recorded before any gigs”, perhaps explaining that while the musical ideas are wide-ranging, the tracks themselves are surprisingly compact and dynamic. “There was an immediate chemistry,” he enthused to London In Stereo. “The first tunes we played were ‘Release!’ and ‘Fix My Life’ which I brought to the first rehearsal and we nailed them right away. It felt amazing”.

Those two tracks kick the album off, and the mighty wallop they give your eardrums feels pretty amazing too. ‘Fix Your Life’ launches proceedings with brutal horns, clattering percussion and Gaya doing his best impression of a whooping, growling jazz goblin, while the afrobeat rhythms of ‘Release!’ power along at a tempo roughly equivalent to the one Kanye West’s heartbeat reaches whenever he catches sight of his own reflection. The feeling of total abandonment twinned with intense repetition makes for a truly psychedelic experience.

North African / Middle Eastern modes are spiced up with a dancehall beat on ‘Tuna’, but this isn’t just a musical tourist cruise; or if it is, it’s one where the band toss their passports into the sea, leap onto the harbour and run naked into the jungle. ‘We Are Enough’ takes a detour back to Wareham’s jazz-punk roots though, with Gaya swapping phrases with the saxophones over hulking chunks of riff. This does have the knock-on effect of making tracks like ‘Free Walk’ sound a little lightweight mind, despite the percussion being sharp as a knife, but it’s a rare lull.

Indeed, the band starts simmering again soon after. Wareham and Hutchings play with a mind-blowingly nimble dexterity on ‘Mouth To Mouth’, the aural equivalent of watching a master sushi chef slice a salmon into sashimi in milliseconds, while Goller’s growling bass backs them up like a seven foot sous chef brandishing a Fender cleaver.

The closing ‘Camel’, meanwhile, is carnival music as Bakhtin might have described it: “the context in which distinct individual voices are heard, flourish and interact […] “threshold” situations where regular conventions are broken or reversed and genuine dialogue becomes possible”. In other words, it rocks like a mother; even unleashing a tidal wave of voodoo surf at one point.

On paper, Melt Yourself Down sound like they’ll simply produce a messy conglomeration of the playlist in the SOAS student union bar back when you used to be able to smoke draw in there. Yet they’re too lively to simply provide a nice accompaniment to a pint of lager and an eighth of cheap bush-weed. Talking about the compositional process, Wareham mused about how “the instrumentation – no chords – allows me to write with space and dynamics, while keeping a rhythmic propulsion”. Well if albums were capable of propelling you into space, the raw materials here are what NASA would be using as fuel. As we said, a fucking blast. 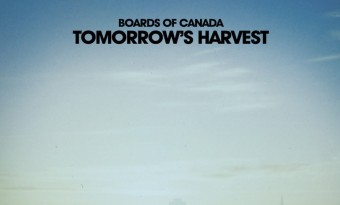 After the cryptic codes, secret streams, hidden records and subsequent lucrative eBay auctions, it's something of a relief that the Boards of Canada album is now finally out, if only so we don't have to read a squillion daily news updates about it on FACT anymore. It was an incredibly well-executed hype drive, especially considering the duo's aversion to publicity, but reading through the latest discoveries on the 2020k blog and combing Youtube videos for clues was getting a bit tiresome. Of course, the problem with building up such a gigantic wave of hype is that, once it breaks, the album in question usually struggles to stay afloat. Indeed, when a full video was finally released (for 'Reach For The Dead') it met a mixed reception, with the general consensus being that it simply sounded like Boards of Canada - a comment that could could be inflected positively or negatively depending on your opinion. The same goes for 'Tomorrow's Harvest' itself. Your first impression is, yes, this sounds like a Boards of Canada album. Yet considering their last album (2005's 'The Campfire Headphase') sometimes sounded more like Thievery Corporation, in some ways that could be considered a relief. And let's face it, despite many people attempting to decipher their formula, no one else really sounds like Boards of Canada either. Standing still isn't such a bad thing when you're already in a unique location. Also, the more you listen to it, the more the album reveals to you. Kicking off with a weirdly '70s flourish that could almost be an ident for spoof retro science show 'Look Around You', opening track 'Gemini' sees several noises squirming against each other as they sliver to the surface, eventually emerging into the sunlight only to be swallowed up by a bass gurgle. 'Reach for the Dead' sounds better lurking in these shadows too, adding an uneasiness to contrast with its blissful harmonies. It creates a fungal tension that flits between natural splendour and pungent filth. It's kind of where Boards of Canada belong. Indeed, one of the benefits of their style having stayed static is that a few tracks here could quite easily fit on their classic albums and EPs. 'Cold Earth' and 'Nothing Is Real' are both familiar in their shifting finery, while there are plenty of their usual ambient interludes too, such as 'Transmisiones Ferox' (Ferox is Latin for 'fierce', classics fans) which sounds like a space control centre located in your own gut. In a very rare recent interview with The New York Times (which is worth reading in full, if only to save us basically quoting the entire thing here), the BoC brothers hinted that the theme of the album concerned "an irreversible vector we're already on as a species", namely overpopulation, and how they'd been inspired by "inappropriately positive or uplifting synthesizer music" in '80s sci-fi and horror films. The album's title takes on particularly creepy connotations in this light. The lineage of this type of dystopian vision, from Soylent Green to Channel 4's recent Utopia series (a show which attracted a cultish devotion that would be familiar to the pair), seems to be reflected in the titles of tracks like 'Palace Posy' (an anagram of apocalypse) and 'Sick Times', which also fits the theme by gradually decaying at a point when previous BoC tracks would have expanded. It also reflects their composition process, which involves them playing live instruments through "stacks of destructive hardware" and creating a collage from the surviving sounds. At their best they reform these elements into something truly otherworldly, but there are moments where tracks feel superfluous, unfinished or just a little unsatisfying, such as the messy and meandering 'Jacquard Causeway'. Such moments are in the minority though. 'Come to Dust' hits the lowest bass depths of the album and its weary beat drags in the most satisfying way possible, while the butterfly's heartbeat of 'New Seeds' and the hazy 'Split Your Infinities' seem to exude an almost physical heat - you can practically feel your eyeballs drying up as you listen. 'Collapse', meanwhile, is one of the few BoC tracks that sounds like someone else, its spacey repetition recalling the Krautrock group Cluster or, more recently, Emeralds. The album closes in gorgeously unsettling style. The string descent of 'Semena Mertvykh' (Russian for 'Seeds of the Dead') hums with desolation, and ironically is enhanced by the degradation of its form - it was recorded onto an old VHS deck "so you can hear all the pockmarks". In fact, they attribute part of their appeal as being the result of the accidental moments of magic that are sometimes born of recording on analogue equipment: "As with digital photography, people have gotten used to applying simulated filters onto their pictures just to inject a bit of romance into the thing, because the raw pictures are so flat. But in the analog realm these beautiful things just happen by themselves without your conscious effort. You could say the wobbles and flutters in our music are equivalent to something like weeds overgrowing an old building. Nobody puts the weeds there, but nature comes along and makes the scene very tragic and beautiful." Tragic and beautiful sounds about right. The hype that preceded 'Tomorrow's Harvest' had many fans salivating like kids being driven to a theme park. For some, finally hearing the album was a bit like arriving only to find the theme park had actually closed years ago and was now lying in ruins. But ruined theme parks can be all more magical for their dereliction. It may still just sound like a Boards of Canada album -but since when is that a bad thing?
Read More