‘An Englishman’s home is his castle’ is a phrase that goes back to the 16th century, enshrining the right of a homeowner to do what they please in the privacy of their own home without the intrusion of either stranger or State. As Pitt the Elder eloquently put it in 1763: “The poorest man may in his cottage bid defiance to all the forces of the crown. It may be frail – its roof may shake – the wind may blow through it – the storm may enter – the rain may enter – but the King of England cannot enter”.

While admittedly it’s more likely to be a TV License inspector or Jehovah’s Witness begging entry to your domicile than a rambling King these days, the right remains to turn away anyone knocking at your door (at least until the police accidentally boot it down while attempting to raid the drug dealers next door). And considering the world outside is a mess of rapists, hailstones and attempted beheadings, staying indoors sometimes seems like a pretty good idea.

That seems to be the conclusion Nancy Elizabeth came to before creating her third album anyway. ‘Dancing’ came about when, with “no money to do anything and no reason to be anywhere”, she locked herself away with a bunch of instruments and set about stitching them together. Indeed, considering the press release describes her chosen dwelling as a ‘bower’ (a woman’s private chamber in a medieval castle, apparently), it would appear that she was taking the home/castle parallel very seriously.

Which is appropriate for an album which contains a few medieval modes itself. This is folk music that spans great distances; songs like ‘Indelible Day’ could’ve been written hundreds of years ago, while the electro-acoustic, Tunng-tied dance of ‘Debt’ is moored firmly in this century. In the bubble of Elizabeth’s Mancunian flat time seems to have dissolved, leaving her free to span the aeons like a piano-playing Doctor Who.

She crosses regions too. Lead single ‘The Last Battle’ partially locates itself in Spaghetti Western-ised Southern Europe, with a Morricone-esque vocal line worthy of ‘An Ecstasy of Gold’. It’s completely beguiling, with Elizabeth insisting “I won’t be the devil’s whore / No more, no more” over a moodily sauntering chord progression.

The whole album feels like the musical equivalent of an only child left to its own devices, creating entire worlds in a bedroom using only whatever surrounding objects are to hand. “The great thing about music is that it doesn’t cost anything to make,” is how she puts it, although that’s to ignore the vast amounts of time that’s gone into this – two and a half years of secluded songwriting to be exact.

And it’s time that’s clearly paid off, especially on tracks like the sometimes plinky, sometimes pensive ‘Heart’, which comes across like a less quirky CocoRosie and features gorily gothic lyrics like, “For him I removed my very skin / My blood poured out on the floor”.

Serafina Steer, Laura Marling and even PJ Harvey’s ‘White Chalk’ album all have echoes here as well, while Elizabeth’s musical voice is blessed with a notable clarity. There are times, however, when things could do with being muddied a little, especially on the airily undulating ‘Mexico’, which starts off nicely but threatens to veer off into Enya territory by the end.

Fortunately the fascinating moments outweigh the wearying ones. ‘Shimmering Song’ is a brilliant bit of dappled sunlight filtering through breeze-tousled branches, while the closing ‘Early Sleep’ is a somewhat creepy lullaby, with voices chattering in the background like the ones in your head when you can’t sleep, negative thoughts flying about like bits of silver paper in the Crystal Maze dome.

It ends with line: “Here I am. Here I dare to be human”. If we assume the ‘here’ is her own home, then that makes a great deal of sense. She may be surrounded with instruments, but it’s her voice that shines through most, not least on ‘All Mouth’, an adroit bit of minimalism created by manipulating slices of her own singing. Again, it seems to emphasise how isolation can be the greatest form of inspiration. In her own words, “external influences, and having to engage with other humans, does somewhat hinder my ability to create. Making music is my defence against aural clutter”.

Does that make ‘Dancing’ aural clutter for the rest of us then? Maybe so, but like that magazine lying open on an unread article, the ashtray just at hand when you need it, or a bunch of purple pebbles picked up from a recent trip to the beach, it’s the kind of clutter that’s comforting to have around. 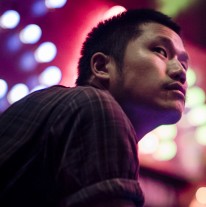 When Alex Zhang Hungtai, aka Dirty Beaches, found his third album 'Badlands' (2011) breaking through into the guaranteed sales Mecca that is Pitchfork approval, he also attracted the requisite side dish of low-level snark that goes with the territory. Who was this guy, with his slick-backed hair, vintage mics and Rumblefish leathers? How dare he play distorted rock and roll while striking such a considered affectation of supposed authenticity? Out, you heathen poser, out! However, it turned out that not only had Hungtai been doing this shit for quite a while before anyone really noticed, it also came from somewhere far more personal than a superficial glance might indicate. His studied 1950s schtick (and it was very much intentional schtick) was inspired by old photographs Hungtai found of his Dad (a couple of which ended up adorning his 7" covers). It was a way of making a connection in a distant relationship, with Hungtai pontificating to Time Out about how "father figures from that generation, you know, it’s almost impossible for them to express any kind of intimacy with you through words". Perhaps he felt music could foster the bonds that language sometimes can't. His follow-up album also has its genesis in deeply personal matters, namely the end of a four-year relationship. Originally intended to be released as two separate albums, Huntai's label convinced him to double them up, perhaps mindful that while the twisted drum-machine rock of 'Drifters' would still appeal to 'Badlands' fans, the more challenging and largely instrumental 'Love is the Devil' might prove a tougher sell. As it is, the two complement each other fairly well. 'Drifters' was partially recorded in Canada and finished off in his friend (and Brian Jonestown Massacre founder) Anton Newcombe's studio in Berlin, and exhibits the nervous energy of someone still very much in 'band mode'. 'Love is the Devil' meanwhile was recorded entirely in Berlin after the 'Drifters' sessions, and is a more reflective and rather sad work,like coming down off a drug that wasn't that much fun to take in the first place. When the latter's title track was uploaded to Youtube it elicited a somewhat bemused response from fans, and Hungtai couldn't help but respond with an explosion of emotional vitriol that only indicated just how much these songs meant to him: "i don't care about pleasing your expectations... I was crying my fucking eyes out when i wrote this and punching myself in the face". As he'd told Pitchfork, in comparison to the character study of 'Badlands' these albums were "me from the core, based on the last two years of my life." The Youtube commenters that suffered his wrath will probably be placated somewhat by the 'Drifters' portion. Opening track 'Night Walk' is a sour slice of suicide disco in a similar style to recent Odonis Odonis single 'Better', while Hungtai's vocals on 'I Dream in Neon' skulk through the depths like a sturgeon in a distressed leather jacket, with only occasional synth tones puncturing the murk. There's about as much sunlight here as there is in Wrexham between Spetember and July. The gritty funk strut of 'Casino Lisboa' makes you want to grow a grizzled beard and stomp down dodgy streets in over-sized boots, wearing sunglasses you've just snatched off someone's face. 'ELLI' is a little sweeter, roosting on Group Rhoda's frosty electro-pop branch and sounding a little like the theme tune to an obscure kids TV show, although admittedly one devised by David Lynch. From thereon things only get weirder. 'Aurevoir Mon Visage' has Hungtai rambling over a bubbling tribal rhythm like a disorientated witch doctor in a deserted alleyway, while 'Mirage Hall' is creepy, queasy and discordant (if somewhat overlong), starting off like the soundtrack to a film somewhere between Suspiria and Assault on Precinct 13, and finishing with Hungtai doing his best Alan Vega impression over a twangy techno beat. The final 'Drifters' track, 'Landscapes In The Mist', is perhaps the most moving - a cold, ambient paddle through misty waters, with a distant saxophone leading the way. 'Love is the Devil' largely continues in this vein. 'Greyhound at Night' is a puddle of noir-ish jazz, 'This Is Not My City' is damp with the slow-motion tears of a crying piano, and 'Woman' is akin to a BBC Radiophonic Workshop piece that somehow manages to sound like it predates Delia Derbyshire and the gang. There's a similar lost, dusty atmosphere here that made L. Pierre's recent 'The Island Come True' album so appealing. 'Alone at the Danube River' sums up the second side nicely; an impressionistic guitar solo sliding over chords that lurch sadly, like a dinghy that's been tied to an abandoned jetty for several years. The overbearing misery can get a bit much though, with 'Like the Ocean We Part' too weighed down with drudgery to be particularly listenable. It's the only 'Love is the Devil' track that features Hungtai singing, but he eschews the lonesome croon that made previous singles like 'Lord Knows Best' so beautiful in favour of a badly-held stumble that goes nowhere. In fact, the vocals are almost entirely unintelligible on 'Drifters' too, perhaps a result of Hungtai's insistence that "I suck at writing lyrics". Fortunately the perfectly-paced paean 'Berlin' manages to round things off nicely, leaving you with the impression that, actually, Dirty Beaches can do this ambient thing pretty well. This 74-minute double is less 'Another Side of Dirty Beaches' and more 'Two More Sides of Dirty Beaches'. The second side may be more difficult to swallow for some, but you get the impression there are a few more sides left to discover. You get the impression they'll be worth listening to as well.
Read More