As a musician, being featured on a popular music site, especially one that isn’t essentially just a press release aggregator, is a gratifying moment. If nothing else, it’s reassuring proof that the music you’ve spent months questioning (“Is this actually shit? Oh god, it’s shit isn’t it”) might actually be decent.

So you can imagine how chuffed William Doyle (aka East India Youth) must have felt when The Quietus decided to not only feature his music, but to form an actual record company just to help bring it to a wider audience. Co-editor John Doran summed up the magnitude of that decision by comparing starting a label to “withdrawing all your money from a cash machine and setting fire to it while simultaneously flushing your own head down a toilet filled with goat’s piss”. Safe to say Doyle had made an impression.

Understandably, many people expected something very special indeed. And yet, on first listen, I found the ‘Hostel’ EP they released underwhelming. While Doyle clearly had talent for blurring the lines between pop music and more experimental composition, the end result just felt a bit wishy-washy. I have a personal bugbear for music that can easily be described as earnest, as it often turns out to be too wet, white and winsome to excite, and earnest was a word that immediately sprang to mind.

Yet when a promo copy of ‘Total Strife Forever’ dropped into my lap, I felt inclined to give it another go. Perhaps it was the fact the title appeared to be a piss-taking pun on a Foals album, a band whose “highly polished approach to ‘math rock’ is making them sound a bit like an advert for a trip on a ferry”, as Nicholas Burman recently observed here. Or perhaps it was just the fact that people still weren’t shutting up about him. Either way, I chucked my preconceptions in the chiller and slid in the CD. I’m glad I did.

‘Glitter Recession’ is the first track to moor up and unload its exotic cargo – crate upon crate of Glassy phrasing and Reichian rhythms. Yet Doyle makes these potentially hazardous crates conveniently easy to access. While this track’s time signature could easily be a painful bunch of fives in the listener’s face, it’s tempered by an emotional harmonic palette that makes it significantly easier to hook into, while the cascading synthesizers have a pleasingly sugary tone.

In contrast, the pulsating synths of ‘Total Strife Forever I’ are more reminiscent of early Fuck Buttons. Yet whereas the Bristol duo are rarely able to resist the temptation to fill any empty space with rainbow noise, this feels more like a stark white casting, Rachel Whiteread style, like the impression that would be left if their music had a physical form. Strange harmonic echoes ring out and occasionally squall, with some simple keyboard chords and a 2/4 kick drum the only anchors Doyle needs as it builds towards a hypnotic crescendo.

It’s a palpable shock when his vocals suddenly intrude upon this hitherto alien world at the start of ‘Dripping Down’. That someone capable of making something so disorientating can also knock out a fairly straightforward pop song probably shouldn’t come as a surprise – Brian Eno’s been doing it for years after all – but it does give the album a sudden twist. Whether it jerks you out of your reverie or actually enhances it probably depends on your tolerance for euphoric electro-pop, but you can’t deny the man can put together a sparkling pop package, while the a capella vocal harmonies at the end let the song drift away beautifully.

Doyle then turns to uptempo techno for ‘Hinterland’, a blissfully kinetic excursion that is nonetheless let down by some flat-sounding drums. Someone told me ‘Total Strife Forever’ is essentially the exact demo first sent to The Quietus, and this is one track that could’ve benefited from richer production that would’ve kept it from sounding like an early Jon Hopkins cast-off. Ironically, Doyle’s forays into dance music don’t ring as true as his pop and minimalist use of electronics.

The tempo drops for ‘Heaven, How Long’, although Doyle’s voice is initially a little high in the mix, distracting too much from the gentle fluttering behind it (although that dichotomy is at least reflected in lyrics about “valerian awakenings”). Fortunately a neat woodblock ‘n’ ride rhythm soon appears to tie everything together. Things peak with a soaring vocal, although the uplifting tone might make some people’s skin a little itchy, while the rampaging motorik beat that comes in afterwards isn’t a patch on its more subtle older brother.

‘Total Strife Forever II’ seems to prove that Doyle is more bewitching when less overblown, with its robotic undulations feeling like an electronic bagpipe breathing slowly. Brass and choir-singing inflate the middle of the track to give it some shape, but you could happily listen to the opening phrase for three minutes on its own.

‘Looking For Someone’, a track which initially repelled me, is now probably my favourite. The lovelorn lyrics are framed by a strident kick snare combo, with little bells hanging off them like festive baubles. Then a new synth line appears and tears things apart, ushering in some huge bass and proceeding to pump up your heart until it feels like it might burst. It’s reminiscent of early M83 tracks like ‘Cyborg’ and ‘Run Into Flowers’, in that it manages to feel straight-off-the-production-line synthetic and yet also intensely emotional. If I was being crass I’d say it’s the sort of thing you might listen to after just being dumped by Wall-E, but that would be to cheapen something that’s actually quite beautiful. Also, in this instance, Doyle’s voice provides a touch of unembellished humanity that works perfectly.

Similarly, the instrumental ‘Midnight Koto’ manages to feel simultaneously gritty and spotless, the heavily-reverbed pizzicato stabs feeling like sharp steel cutting through mud. It segues perfectly into ‘Total Strife Forever III’, which keeps your ears in a firm but gentle psychedelic grip.

With a title more befitting of an Erik Satie piece, the utterly gorgeous ‘Song For a Granular Piano’ satisfies the suspicion that, like store-bought pasta sauce, Doyle’s vocals are much more palatable when they’re fucked around with a little bit. The wobbly piano phrases are also wonderfully warped, making it feel like you’re observing the track through a rain-streaked window. Then the closing ‘Total Strife Forever IV’ fades in, initially feeling like a distant, static-ridden radio transmission of its earliest namesake, before inevitably being sliced up by cleaner synths.

While there is something about East India Youth that often feels piercingly bright, almost brash in its high-definition, there’s also a feeling that it’s not an affected attitude. Instead it feels more like one of those people who’re able to happily stand bollock-naked in front of a group of strangers, as if to say, “I am so entirely comfortable with who I am, including all my flaws, that I feel no shame in being around you as nature intended”. A potentially annoying demeanour in real life, sure, but it makes for great art. Despite some initial misgivings, ‘Total Strife Forever’ is proof of that.

Nate Connelly - A Dream About Being Lost 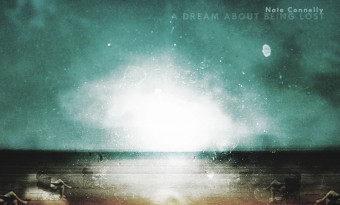 It's a brand new year! And what better way to celebrate than be showcasing an album that actually came out at the end of 2013. Oops. Still, when it's this good, who cares...
Read More