The term ‘Lynchian’ is so overused in music writing that it even popped up in The Stool Pigeon’s A-Z Guide to Music Journalist Bullshit as a useful go-to synonym for ‘cinematic’. It’s become virtually omnipresent, applied liberally whether the musicians in question are deliberately trying to channel David Lynch’s subversive vision of America, as in the case of Dirty Beaches or Lana Del Ray, or haven’t even seen The Straight Story, never mind Eraserhead. One record shop apparently used to stick every press release that mentioned the word ‘Lynchian’ onto a wall of shame. It didn’t take long to fill.

Which was one of many reasons to celebrate the release of his album Crazy Clown Time in 2011. Perhaps people would finally stop applying the term ‘Lynchian’ to music unless they meant it literally sounded like him? Sadly, it wasn’t to be; it still frequently rises to the surface like a bequiffed turd in the toilet of music journalism. It seems everyone just decided to ignore the existence of actual Lynchian music in favour of applying David Foster Wallace’s definition of the term: “a particular kind of irony where the very macabre and the very mundane combine in such a way as to reveal the former’s perpetual containment within the latter”. It’s hard to argue with DFW to be honest, he was an incalculably more intelligent man than I’ll ever be (he probably still is even now, five years after his death).

Anyway, Crazy Clown Time may not have deterred people from using lazy adjectives, but it did succeed at one thing: being surprisingly good. Although maybe it shouldn’t have been that much of a surprise. He may be a self-taught musician who’s only ever performed live once (“a traumatic thrill” apparently), but he’s also been quoted as saying: “People call me a director, but I really think of myself as a sound man”. The importance of sound and music in his films adds some credence to that. His new album, The Big Dream, backs it up still further.

The low-key title track that opens the album, featuring a shimmery guitar chord that flickers like a faulty light in a public toilet, seems to suggest that we’re in for a less weird trip than Crazy Clown Time took us on. And by and large that’s true. Except…that bass. That rich, low-slung, booming bass. That’s…hang on, that’s a trap bassline! Did Gucci Mane sneak into the studio or something? Surely just an anomaly…

Yet after a bluesy shuffle through ‘Star Dream Girl’ (which sounds a little like Son of Dave on helium), ‘The Last Call’ kicks in with a full trap beat, albeit a simplistic one. You have to admire him for the attempt, which most men his age would be ridiculed for even considering, although the shabby snare hits means it comes across more like a misguided remix of what would otherwise have been a superb song (the mournful way he sings “last call, time gentlemen please” suggests he wouldn’t be much use at clearing a rowdy pub either). A third trap-flavoured taste comes later on ‘I Want You’, where the darker atmosphere makes it much more effective. Lynch’s vocals there sound like they were recorded in a sanatorium cell, and the way the tinny hi hats open at the end makes it feel like the walls are about to cave in.

Perhaps these unexpected excursions make more sense in the context of the “imagined Deep South” Lynch has located the album in, but it’s blues and rock ‘n’ roll that retains a firm grip on his musical muse. ‘Cold Wind Blowin” is as dusty as an old spoon on a dead man’s mantelpiece, while ‘Sun Can’t Be Seen No More’ drafts in his son Riley for a good ol’ chug-rocker which sees Lynch Snr. singing like he has a mouth full of flies and glue. Then there’s disorientating 12-bar number ‘Say It’, a drunken, paranoid rumble that’s less ‘the love that dare not speak its name’ than ‘the love bullied into speaking its name by a quavering madman’.

However, it’s the one non-Lynch number that packs the most punch. ‘The Ballad of Hollis Brown’, a cover of Nina Simone’s version of the Bob Dylan original and something of a precursor to Suicide’s horrifying ‘Frankie Teardrop’, tells the story of a destitute farmer who murders his family after being driven mad by poverty. The foreboding bass, creeping atmosphere and crackling drumming (courtesy of long-time collaborator Big Dean Hurley) remind you that Lynch really is a master of creating tension; he truly brings out the feeling of someone who’s lost touch with reality after one crushing blow too many and spent their “last dollar on seven shotgun shells”. Pretty chilling.

The airy if uninspiring trip hop of ‘Wishin’ Well’ follows, although by the time you get to ‘We Rolled Together’ the pace begins to feel a little sluggish. You start to feel like you’ve been sitting in a log cabin all winter eating nothing but dried squirrel tails. Which may well be the point, but it does make the album somewhat wearying after a while. The fact that Lykke Li-featuring recent single ‘I’m Waiting Here’ is only included as a bonus track shows how its softer, poppier tones are out of kilter with the pervading mood.

‘The Line It Curves’ lifts things again though, with the throbbing bass and panoramic flanged guitars sounding like something off Mark Lanegan’s Blues Funeral album. Lynch’s love of Transcendental Meditation seems to add a touch of zen to an otherwise traditional lovelorn lament, with the chorus running: “The line it curves / A certain way / Bending back to the start / You’re the woman who broke my heart”. Unfortunately the horribly schmaltzy major key arpeggios that taint the closing track, ‘Are You Sure’, mean similarly zen lyrics become hokey without a contrasting convention to play off – “stand up and be a mountain” sounds more like a Rooibos-drinking middle manager’s motivational poster than something truly Lynchian.

Ah, Lynchian. Does David Foster Wallace’s definition actually even apply to David Lynch’s music? Largely yes. Musically, The Big Dream revolves around fairly conventional treatments of both traditional and more modern genres of American music. Yet Lynch’s oddly manipulated vocals, grasp of atmosphere and sparse, unsettling arrangements do indeed add a touch of the macabre to the mundane. So yes, this is Lynchian music, and pretty fine Lynchian music at that. Now put that adjective to bed until his next album comes out. 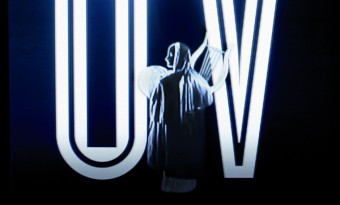 Mindnight Juggernauts descend into the Uncanny Valley, with synth-pop that switches between sweet, stylish and sickly...
Read More