There were two reasons why we were reluctant to pick this as Album of the Week. Firstly, there’s a wealth of competitors for this week’s finest release, with albums from The Revival Hour, On An On, Widowspeak, Ducktails, Speck Mountain, The Holydrug Couple and more all clogging up the musical drains (hmmm, probably should’ve chosen a metaphor that didn’t suggest they’re all giant turds. They’re not, honest). Secondly, it’s already been reviewed in a uniquely personal manner by John Doran at The Quietus, which is kind of hard to top. However, “The Island Come True” is undoubtedly the best album released this week, maybe this year, and so to not recognise it as such would make a mockery of the whole institution. A mockery, you hear! So here goes.

L. Pierre, née Lucky Pierre (named after a vintage smut flick), is the electronic, sample-based alter-ego of former Arab Strap (named after an old erection aid) vocalist Aidan Moffat. In that band he was known for his astonishing lyricism, which could move from puerile obscenity to moving poignancy with a very Scottish swiftness – see the opening line of Arab Strap’s ‘Packs of Three’ for the former and ‘The First Big Weekend of the Summer’ for the latter (a track which, on the surface, is just about staying up and getting wasted in the sunshine – so why are your “eyes a bit damp” by the end?).

It was therefore surprising when his solo project turned out to be a completely instrumental affair. “Hypnogogia” featured lush orchestral samples alongside simple beats to produce something worlds away from the Falkirk boozers and doss houses of Arab Strap. So much so that it was years before I actually realised Moffat was behind it – when James Holden selected opening track ‘Angels on Your Body’ for his At The Controls mix I assumed L. Pierre was just some French bloke he’d snared for his Border Community stable. Moffat described the record as his “own personal comedown mix”, inspired by “10p charity shop records… I loved taking these unwanted and fairly atrocious records and making something darker and hopefully prettier out of them.”

Two more albums followed along similarly blissful lines, with Moffat indicating that 2007’s dronier “Dip” was the last L. Pierre project he’d be releasing. Then he discovered some old samples while absent-mindedly rooting through old boxes of CDs, and “The Island Come True” was born.

As an album it sounds, in the best possible way, like a rescued 10p charity shop version of his earlier work. At times it feels like a voyage into the memory wastes of dementia; like “Dip” it opens with recordings of gulls, making you feel like you’re in a familiar place but with no recollection of how you got there. Even the album’s cover seems like it should be propped up against the wall of a cluttered Mind shop, only likely to sell to a kitsch-crazed spendthrift (or someone who just wants the frame).

Whenever you think you’ve located yourself on this album, you’re taken elsewhere. ‘Harmonic Avenger’ opens with the most dramatic moment on an L. Pierre LP yet (not difficult admittedly), with a pianist thundering down a phrase from Rachmaninov’s ‘Prelude in C Sharp Minor’ in a way that makes you expect a long-cloaked villain to emerge from out of the shadows. It soon calms down however, and develops into something quite beautiful, with strings slowly dancing between the gaps in the piano and a ghostly accordion drifting through the mist. Maybe it’s the influence of Doran’s review, but it seems to communicate the maudlin blurriness of being desperately sad but having reached the point of drunkeness where you can’t quite remember why.

The feelings conjured by this record are frequently ambiguous, and never more plainly than on the heavenly but mournful ‘Sad Laugh’. Strings and guitar descend in a way that initially appears to be sorrowful, but by slinging in the occasional major chord Moffat manages to avoid appearing like he’s simply aiming for a cheap emotional hit. That the track ends with a sample of a child crying in a way that sounds like laughter, or vice versa, is perfect.

The other stand out tracks are ‘Dr Alucard’, notable for employing a percussive element that’s been washed off elsewhere, and ‘The Grief That Does Not Speak’, which puts you in mind of an elderly, dying Italian man who’s succumbed to the final onslaught of senility, the music all that remains in his disintegrating brain. Well, that’s where it puts me anyway. Who knows where it’ll put you.

Elsewhere the album is awash with Hauntological samples: ice cream vans, fractured, layered radio adverts, Calpol-tinged gibberish and, on ‘Drums’, the kind of scattershot, abstract track that Broadcast used to put on their albums to stop you from getting too comfortable. The overall effect is entrancing and affecting where previous L. Pierre albums were simply lush and pretty. Yes they had an emotional impact too, but they never seemed to reach quite as deeply. With “The Island Come True”, it feels like Moffat’s L. Pierre alter ego has finally come true too. 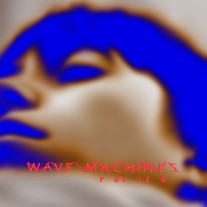 The second album from Liverpool's Wave Machines has been a long time coming. So long, in fact, that it's tempting to make a dodgy metaphor along the lines of: 'waiting for it has been as interminable as a surfer waiting for the perfect wave on Bournemouth beach'. But that's not actually the case. In fact, their debut album "Wave If You're Really There" (2009) totally passed me by. So really it's more like being on Byron Bay and missing the perfect wave because I don't give a fuck about surfing. However, after spending the last fortnight listening to Wave Machine's new record, "Pollen", I've discovered that I am, metaphorically, a fan of surfing after all. A low-key electro-pop album, it's reminiscent of a less frosty Bear In Heaven or Metronomy if they decided forego the 'Nights Out' in favour of staying in and watching Newsnight. Apparently the delay was mostly down to ensuring quality control, with frontman Tom Bruzon admitting, "we were writing things we thought were good but, to be honest, just weren’t good enough. In terms of a progression, it just had to be better – otherwise we didn’t really see the point in making it". Part of that ruthlessness is attributed to producer Lexxx, who has previously worked with Björk and Goldfrapp, and not only gave them some much-needed outside perspective on what needed to be scrapped but added a nice bit of studio polish to what remained. Opening track 'Counting Birds' begins with a bittersweet cinematic string motif, descending like a faded Hollywood star down an ornate staircase, a theme which is then smoothly transposed into a more familiar electronic setting. The lead single, 'Ill Fit', follows this warm welcome. It's a huge pop song that sounds like Prince spraying MGMT with gallons of his purple love juice, although not quite as lurid as that might suggest - it gets in your head by worming its way in through your ears, rather than forcing itself in your face. While this is a positive criticism, you do wonder whether Wave Machines would garner greater attention if they were slightly bolder, as in all honesty some of the more chart-friendly tracks come across as slightly ineffectual. Possibly this is because Bruzon's vocals lack a little bit of character. Again, not necessarily a bad thing - personally I prefer his low key singing to that of Hot Chip's Alexis Taylor or Everything Everything's Jonathan Higgs - but it does mean you're never really gripped by the vocal parts. Which is a shame, as lyrically he covers a much more interesting range of subjects than your average frontman, from the News International scandal to the film "Moon", via the tragic fate of the Morcambe Bay cockle-pickers in 2004. So though the poppier moments reference huge figures like Prince and the Pet Shop Boys, Wave Machines are at their best when taking things down a notch and just sounding like themselves. The propulsive 'Blood Will Roll' is my personal favourite but the undulating 'Unwound' is similarly attractive, while 'Gale' gets the pulse racing with its sci-fi space-chases. As the minimal electronic fluttering of album closer 'Sitting In A Chair Blinking" gently ebbs away, you're left in no doubt that these guys really are gifted songwriters. Assuming their next record takes as long to make as this one, they've got a fair amount of time to decide which direction they want to take next. Go balls out, make a huge pop monolith and potentially become huge? Or play to their strengths and make a slow-burn, understated classic that no one will buy apart from me. The choice is yours, gentlemen!
Read More