I first saw Anna Calvi play three years ago, supporting Clinic at a secret show at The Half Moon pub in Herne Hill. I want to say something along the lines of, “from the moment the first note rang out, I knew she was destined for success”, but that would be a lie. The Half Moon, though a lovely venue at that time, doesn’t really exude the atmosphere of potential stardom. However, it’s no exaggeration to say that, while Clinic were admittedly doing a test-run of tracks from their weakest album (Bubblegum), she totally blew them off the stage.

Well, maybe a bit of an exaggeration; obviously she didn’t literally blow them off the stage (although considering the power of her voice, you wouldn’t bet against her having the lung capacity to do so). Yet her performance was so complete that I was amazed I hadn’t heard of her before. While not one for getting over-excited about guitarists, it was difficult to keep from drooling over her technique, wielding the instrument like a paintbrush one minute and a bayonet the next. Accompanied only by Daniel Maiden-Wood on drums and Mally Harpaz on harmonium and percussion, her widescreen sound and emotionally wrought songs were genuinely breathtaking.

Yet somehow, I found her self-titled debut album a little disappointing. Sure, there were some great tunes (‘Blackout’ and ‘I’ll Be Your Man’ being particular highlights), but it just didn’t have the same slap-around-the-face impact of her stage show. It wasn’t that it lacked passion though. In contrast, it felt so overloaded with drama that, over ten tracks, it became a bit wearying. Although 170,000 people (and the Mercury Prize panel) would probably disagree with that opinion.

In many ways, One Breath is just as impassioned as its predecessor. Yet it makes for a more rounded experience, perhaps because it paints from a more assured and increasingly varied emotional palette. Her two most obvious weapons, the booming voice and virtuoso musicianship, are only drawn when required. There’s no unnecessary showboating or vocal gymnastics, nor any overt processing or effects. Everything is done purely for sonic effect, and generally it’s done very well.

Opening track ‘Suddenly’ doesn’t immediately make that obvious though. While it does boast a memorable chorus, everything feels a little too conventional, a little too content with itself (a tempestuous instrumental burst halfway through being the exception). Lead single ‘Eliza’ appears ready to tread a similar route at first, but as it swells into the chorus it snags you with an unexpected time change into 5/4. Add in some pummeling guitar arpeggios and your blood soon starts racing.

‘Piece By Piece’ is a very different beast. All the parts are so neatly placed (and paced) that it actually creates an odd sort of tension – like walking into someone’s obsessively tidy house and where the dearth of dust bunnies suggests a mind waiting to snap. Indeed, alongside the staccato piano, the symphonic strings, and a vocal that Calvi’s careful not to overcook, there are a couple of moments where an obnoxiously off-kilter guitar briefly kicks the door in, and there’s a quiet rumble of discord underneath the otherwise pretty finish.

Comparisons to Polly Jean Harvey have dogged Calvi from day one, though they are usually pretty tenuous. However, it has to be said that the quieter passages of ‘Cry’ do have a touch of the PJs about them; there’s a tearful lilt that is a little reminiscent of tracks like ‘Dear Darkness’. However, any risk of the track becoming sedate are dismissed by a couple of cacophonous explosions of sound, that snap shut as suddenly as they arrive.

‘Sing To Me’, however, discards this dynamic instability; it’s probably the gentlest, subtlest thing Calvi’s ever done. It’s also probably the most beautiful. The backing vocals in particular are hauntingly cinematic, like Alison Goldfrapp’s softly ululating them from a misty mountaintop in Rivendell. In comparison, the strident ‘Tristan’ can’t help but sound a bit too full of bluster.

After the creeping, droning synths of the title track ebb away, ‘Love Of My Life’, the album’s only real rocker, follows. The 7/4 time signature gives it a menacing feel, and it’s a well timed burst of noise, danger, fire and sensuality on what is largely a more mournful record (perhaps partially as a result of the death of a close family member during recording, although it would be crass to call One Breath some sort of bereavement album). It segues into a surprisingly delicate 4/4 section towards the end, providing a tasty bit of contrast.

The contrast with ‘Carry Me Over’ is less mouthwatering though; it would be the least interesting track on the album if it wasn’t for some fantastic percussion. With ten other stronger candidates here (including the rusted lullaby of ‘Bleed Into Me’, which follows it) it’s a puzzle as to why this ended up the album’s longest track. Ending on the downbeat ‘The Bridge’ could also be seen as an odd decision, but this one works much more effectively. Calvi’s love of choral music comes to the fore, as angelic voices oscillate like a censer being swung in an empty church.

It’s a low key way to finish, not to mention one that’s full of pathos. Much like the album as a whole, it feels like Calvi, having grabbed her audience’s attention with superlative musicianship and a range of dynamic tricks, is now at liberty to let her full breadth of expression flourish. It’s interesting that she references Frida Kahlo as an influence; as she expressed to Dazed recently, “[Kahlo] wasn’t afraid to be a woman, and show her pain at the same time. It’s really important to show vulnerability and strength”.

Three years ago she played a tiny South London pub and made it feel like the Albert Hall. If she carries on in this vein, she’ll soon be able to do something even harder: make an Albert Hall concert sound like an intimate pub gig. Can’t wait. 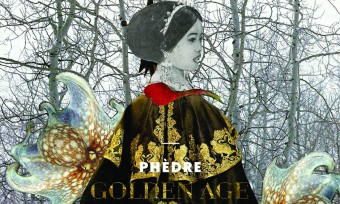 Their name may conjure images of incest and suicide, but in these gloomy times Phèdre provide a welcome injection of fun...
Read More