“Hollandaze”, the debut album from Toronto’s Odonis Odonis, was one of 2011’s most underrated records, an irresistibly abrasive mix of punk, surf rock and shoegaze dressed entirely in black (if you didn’t count the odd flecks of blood).

It’s rather good, then, to have them back with an even noisier follow-up EP, ‘Better’ (which you can hear below). It’ll take a few listens to work out whether it actually is better than their previous release, but this video for the title track certainly suggests it might be.

In keeping with their generally macabre outlook, it features you, the viewer, as the soon-to-be-sacrificed prisoner of some sort of masked cult. While the masks are more hilarious than terrifying, the overall atmosphere of dread is heightened by the screams that close a menacing yet groovy track which exhibits increased electronic elements of their sound (is that a hint of ‘Got Glint?’ by the Chemical Brothers we hear?). Welcome back you evil bastards. 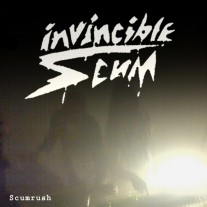 There haven't been many bands like Chrome Hoof, the ten-piece disco-metal maniacs who've prowled stages in outlandish silver get-ups since 2000 while making an unholy, yet funky, noise. But while le Hoof may not have released an album for three years, founder member Milo Smee has still been busy. Invincible Scum is his collaboration with Andy Blake and the video above is to promote their new release, the delightfully-titled 'Scumrush'. If you've ever wanted to know what it's like to attend a woodland rave only to take too many drugs and end up staring at a tree for seven hours, this is a pretty good approximation of it - patterns and distortions emerge out of the bark before everything's sucked into some sort of Brown Hole. The track itself actually goes on for another ten minutes or so, but four minutes is more than enough time for this clip to melt your mind...
Read More