It’s been a little while since our last singles column, but luckily most of these selections are still within their use-by-date. Read on to enjoy tasty new treats from EERA, clipping., METZ and more…

Two things stood out when re-watching Sexy Beast recently: the striking dialogue and the well-judged soundtrack. Baxter Dury crushes both these qualities into four minutes on ‘Miami’, delivering hilariously crude lines (“I’m a turgid, fucked up little goat pissing on your fucking hill” is one delight) over a track that sounds like BadBadNotGood covering an old Specials b-side. Anyone who can declare themselves “the urban goose” with a straight face demands your respect.

The pulsating tension of Chelsea Wolfe’s latest ‘Offering’ swiftly swirls into a majestic gothic vortex, raising hopes that forthcoming album Hiss Spun could reach the bleak heights of 2013’s near-perfect Pain Is Beauty. Apparently an ode to California’s Salton Sea (an “ecological nightmare” according to the Beeb), Wolfe sings about “a thousand lives lived in circles, a planet burning at the seams” with an apposite amount of dread.

Sticking with the watery apocalypse theme, ‘The Deep’ is possibly clipping.’s most creative to date, which is saying something. Commissioned by This American Life for a recent podcast on Afrofuturism, clipping. take their cues from cult Detroit techno duo Drexciya, whose 1997 album The Quest built a myth around an underwater race who developed from the unborn children of pregnant women thrown from slave ships. ‘The Deep’ finds the Drexciyans rebelling against the “two-legs” who’ve destroyed their habitat through oil drilling and global warming, and the further the narrative develops the more fast-paced and funkily Outkastian the track becomes, before it’s submerged under a tidal wave of white noise. Immense.

Like some of the new stuff by EERA’s sort-of labelmate Annabel (lee), ‘Christine’ has a warm, timeless intimacy that would sound good weeping out of a dodgy radio in a gritty HBO drama or Scandi Noir. It’s more low key and lo-fi than what we’ve previously heard from the Norwegian artist, and the change in style suits her well. Dare I say it could be the start of a brand new EERA? (Sorry, couldn’t hold that one in.)

The first thousand copies of Four Tet’s new album are available exclusively from Oxfam, which is reason enough to grab a copy on pre-order. Even if you’ve been a little unconvinced by Keiran Hebden’s output the last few years, ‘SW9 9SL’ suggests New Energy might be worth picking up even without an accompanying glow of charitable satisfaction. The postcode of the title is the location of Brixton Academy, and the euphoric midway swell will have you wishing you were right there, at about 3am, with a pint in your hand and a pill in your belly…

Jozef Van Wissem may be the first lute player ever featured in Single-Minded, although if this track is anything to go by then that’s a grotesque oversight for which I humbly apologise. I’d be quite happy for Van Wissem’s ‘Golden Bells’ (heh) to ring in my ears for all eternity, and not just because it would make a pleasant change from the tinnitus.

Didn’t go to Notting Hill Carnival. Didn’t go to Hackney Carnival. Haven’t been to any clubs lately. Haven’t even had my stereo up loud enough to annoy the neighbours for quite a while. This track makes me regret all of those decisions.

The recent Mount Kimbie album is the latest addition to my ‘new stuff to listen to’ playlist on Spotify, which means I probably won’t get to hear it until around June 2018. A few plays of Luke Marzec’s ‘Another Guy’ should fill the gap till then nicely though, exhibiting the sort of tastefully embroidered synths and croaky vocal fries that typify their collaborations with King Krule.

METZ are one of those bands who I think I don’t like until I hear a track like this. Pleasingly, ‘Mess Of Wires’ sounds exactly like its title suggests. Well, maybe not exactly – the perfect title would probably be ‘Mess Of Wires So Impossible To Untangle That You End Up Trying To Break Them With Your Bare Hands, Fail, Then Throw The Appliance They’re Attached To Against The Wall And Fall To The Floor Weeping’. Brevity is more ‘punk’ though, I suppose.

Actually, Miguel is someone else who I thought I didn’t like, but the N.E.R.D.ish skank of ‘Shockandawe’ is hard to resist. “Guess what this song is about” he drawls at the start, although it’s probably best not to take that as an invitation to actually listen to the primary school lyrics. Still, that beat…

Rome Is Not A Town are not only sticklers for the nomenclature of urban settlements, but can also count none other than Thurston Moore as a fan; in fact his daughter has apparently done some of their sleeve art. You can hear why he’s hooked, as the Gothenburg quartet employ a similarly ear-pickling melody + discord formula, all washed down with a hearty guttural chorus. If Converse have any sense they’ll pay thousands to feature ‘I’m In A Brand’ in an advert for the ultimate ironic sync.

The Jet Age Of Tomorrow feat. MarkUsFree – Fly Like Me

The infuriatingly talented Matt Martians has already released one of the best albums of 2017 so far under his own name, and now he looks set to repeat the trick with The Jet Age Of Tomorrow, his long-standing duo with fellow Odd Future alumni Pyramid Vritra. The sumptuous ‘Fly Like Me’ seems to waft out of the speakers as if carried along on a summer’s breeze, at least until the second half stomps in with some ridiculously inappropriate playschool techno. Still, what else can you expect from an album called God’s Poop or Clouds? 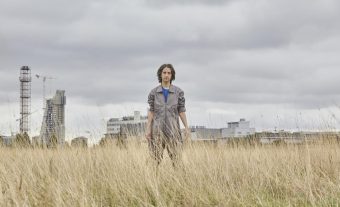 Our latest singles round-up finds James Holden getting in touch with his animal spirits, Drunk In Hell acting like arseholes, and NoLay marching on...
Read More