It’s just over two weeks later and I finally feel I can arise from my tinnitus enshrined crypt, like a shit Mumm-ra (or more accurately a wet and heavily crumpled children’s illustration of Jarvis Cocker that has been saturated with urine by an inebriated vagrant), to share with you the details of the glorious ear-shredding that occurred during that fateful eve, when I at last bore witness to The Body and Uniform, at the dark nub that is Angel’s Electrowerkz.

It was a rainy and shitty Monday night and the watery tears of the gods ran tarred lines down Electrowerkz’s cold brick walls with a declining murk. In stark contrast to the chilly outside, the cocooning interior was flush with a feverish excitement that was beginning to warm the dampened air and dry even the coldest of cockles.

Though I was doing some top notch corner lingering, like a soaked daddy long legs in corduroy, I could tell that the expectant crowd looked stoked for some metallic noisy goodness. I could tell their excitement from their faces, the noisy, nervous shuffling and the fact that most people said: ‘I’m well looking forward to this’.

I’ve not been to many gigs were the audience seemed so psyched and the merch stand was throbbing with eager cash-exchangers (of which I was one, bloody love merch me).

As you may remember (of course you fucking do), I was a tad impressed with the recent Uniform and The Body albums. So I was, to say the very least, bloody excited to finally see both bands live too and thankfully it turned out that I wasn’t to be disappointed.

First to take to the black-as-pitch stage were the always excellent Casual Nun, who opened the night with an absolute blinder of a set. Casual Nun are always good value for a cracking time and the tracks from their recently released Psychometric Testing By… punched through the speaks with all of Casual Nun’s usual psyched-up noise glee.

As I’ve alluded to, Electrowerkz is a dark old venue, with an old disused warehouse feel. So navigating around its thin industrial space can be a tricky proposition, especially when scuttling from the crowd to the back bar to guzzle four more cans of competitively priced lager. I saw a fair few people take shots to the shins from abandoned and unseen chairs and boxes. Luckily my legs remained un-bashed as I’d need them fully working for the full-on buffeting of what was about to come next.

New York duo Uniform filled the deep shoebox stage with a presence that you couldn’t take your eyes off of. So I didn’t. Not even to go to the bar.

As guitarist Ben Greenberg hammered out distorted riffs and programmed beats, vocalist Michael Berdan stalked the stage like a starved, caged tiger, grasping and bellowing into the mic like his life depended on it. Their intensity and ferocity was as enthralling live as it is on record, which basically means they were well fucking intense.

Uniform’s whole set was absolutely immense and ‘Tabloid’ from last year’s Wake In Fright was in particular an early set highlight. Simply put, they were great and I left their set wanting more than my greedy earholes could manage to hold.

Before avant-metal legends The Body’s set there was speculation amongst the crowd about how they would set up. Would they use guitars and drums? Would they, as for a few recent sets, discard the traditional metal instruments for pure electronics? The answer would turn out to be the latter.

When The Body took to the stage, Chip King was without his guitar and the duo were hid behind a stack of electronic gear. There wasn’t a single stringed instrument in sight. Well there may have been, but I’d had about six cans of lager by that point and my vision was mildly a-squiff.

The Body went through their noise drenched set with a serious focus. The electronic drones and beats accentuated King’s pained, wind tunnel screeching, ensuring his voice was sent ringing through the shadows with piston clarity.

Even without the guitars it was an abrasive, face shredding set. Full of howling noises, programmed drums and pulsing soundscapes. They were on stage for just over half an hour but it had felt as though I’d been lost in a mangle of clatter for a lot longer. In a good way.

It was a great wash of dissonant and cacophonous commotion that was as surprising for its lack of ‘metal’ posturing as it was intense. Unfortunately I couldn’t tell you which songs they played, but it was all a great mess of horrible fucking sound-slaughter.

There’s no better way to have spent a rainy Monday evening. 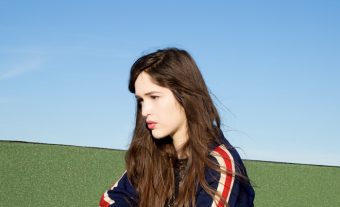 Sort of foreseeing Frank Ocean’s cancellation, we went ahead and planned our top 5 acts so we don’t lose track once dancing at Primavera Bits, the festival’s new stage near the beach.
Read More