With their fifth album No One Deserves Happiness, Chip King and Lee Buford (also known as The Body) set out to make “the grossest pop album of all time”, and boy did they succeed. With No One Deserves Happiness they’ve managed to create an album filled with disgusting rotten ‘pop’. It’s both imminently listenable and oddly off-putting, striking a delicate balance between the two polar opposites.

It’s extreme enough for concrete-eared metal nut-jobs and melodic enough for soft-skinned dismissers of noise. It’s like a sweet, sweet apple covered in rusty razor blades. Not many may persevere but those who do will be rewarded.

Never afraid of a good collaboration (seriously, check out their brutal soon-to-be released collaboration with grindcore band Full of Hell titled One Day You Will Ache Like I Ache, it’s savage), this is The Body’s first album under their singular moniker since 2013’s Christ, Redeemers.

Expanding The Body’s core duo of King on vocals/guitar and Buford on drums, No One Deserves Happiness enlists the vocal aide of The Assembly of Light Choir’s Chrissy Wolpert and Humanbeast’s Maralie Armstrong to counter King’s pained high-pitched shrieking, which sounds like someone being fed through a mangle. Backwards. It’s King’s vocals which may put off your average, casual metal listener but trust me it works. If you don’t trust me you can just fuck off right now.

The album’s opener ‘Wanderings’ sets out No One Deserves Happiness perfectly, laying down a spacious drum-beat that soon gets crushed beneath walls of guitar distortion and melodramatic synths. Wolpert’s powerful theatrical vocal ghosts over and between the sonic hissing, giving the song a deep gothic richness. Considering The Body’s prolific history of collaboration it’s somewhat fitting that the first lyric you hear on the album is Wolpert gently lulling, “Go it alone”. Soon her voice is drenched in the desperate wail of King.

To describe this album as metal is hugely disingenuous; with its use of throbbing drum machines, cello and trombone I’d describe it as industrial melodrama. ‘For You’ is classic The Body, intense static noise which hits you hard, right to the back of your teeth. It’s the audio equivalent of a cartoon character’s head, probably Elmer Fudd’s, being squashed between two crash cymbals as they are repeatedly and violently clashed by a manically laughing and bloodthirsty anthropomorphic bunny.

King’s pained screeching and squawking flitter in and out of songs like someone having their heart ripped out of their arse. Fuzzed out in the mix they strangle and tear at the light provided by Wolpert and Armstrong.

‘Hallow / Hollow’ is like having all of the air squeezed out of your body by a giant. It’s The Body doing what they do best, nasty bleak noise-metal that sounds like someone trapped in a barbed wire cage. It certainly sounds upsetting. Played loud your neighbours would probably be worried. That is until the lovely final vocal harmonies bound in to scoop up the remains of the song and gently lay them to rest.

This ugly beauty is No One Deserves Happiness’ strong point. If all of my descriptions up until this point make the album sound like an unlistenable, moany, pretentious dirge then I’ve done it a huge disservice, as that’s far from the truth. Each song oozes a deep listenablity and the electronics beneath the harsh noise propel each track into the brain and in some cases into the toes. It’s with this that The Body make the rough jagged edges of the extreme and hurtful sound rounded enough to lift the songs into an experience that, though not necessarily uplifting, is certainly not dour or dull.

The grimy electro drum intro to ‘Two Snakes’ could almost be a new Death Grips track; that is until the drowning screeching starts again. The elements of attractiveness and repulsiveness continue throughout, a whipped slice to the flesh with a sharpened feather. Apparently ‘Two Snakes’ was inspired by Beyoncé and in its grubby junk-beat you can really hear it, as surprising as that sounds.

Continuing the distorted R&B grind comes ‘Adamah’, which is like Björk covering The Lost Boys soundtrack. Maralie Armstrong wrote and sings the lyrics, her voice sounding like a cathedral of loss. Which brought to my horror-addled mind a quote from Lamberto Bava’s ’80s splat-fest Demons: “They will make cemeteries their cathedrals, and the cities will be your tombs”.

Prescience features a spoken-word piece written by artist and writer Édouard Levé, whose novel Suicide foreshadowed the writer’s own sad death. Inscribed in the album artwork there is also a quote from American author Joan Didion: “A single person is missing for you, and the whole world is empty”. These literary quotes concisely display the deep sense of loss and sadness that permeates the entire album. But rather than alienate and isolate the listener with a depressing smudge, the album conversely reminds you that you are not alone.

All in all, No One Deserves Happiness proves to be one of The Body’s most listenable albums. That they can continue to push their sound into different styles and spaces, on their own or in collaboration, is quite remarkable. Though this album may not be to everyone’s taste, those willing to take a bite will be treated to a delicious mouthful of pain. 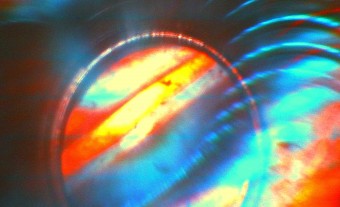 The latest album by Solar Bears is like the soundtrack to the best Sci-Fi film there's never been. Nicholas Burman settles in for some space-age sounds...
Read More