Wake In Fright, the second album from New York duo Uniform (following 2015’s savage Perfect World) is a cold and brutal document reflecting a civilisation that is hellbent on self destruction. It’s the aural equivalent of having your head forced down into a gravel pit by a screaming mutant drill sergeant as the world about you is set ablaze.

As you slowly dig your communicative features deep into the knife-like shards of broken rock, the jagged pieces shred the flesh and bone like wet tissue. Flesh and bone that had once welcomed people with a smile and a raised brow of kindness. The grating exfoliation of violent white noise has erased any trace of humanity from the now skull-shaped effigy, leaving behind only a blank alabaster tribute to what once stood for human goodness.

Uniform have felt the bleakness of this modern world and have decided the best way to deal with it is to filter it through their metallic, digital hardcore in the hope they might be able to make some sense of the hollow existence we’ve called ‘life’.

Released by the excellent Sacred Bones, Uniform’s music is a furious left hook/right hook of Ben Greenberg’s instrumentation – programmed samples, pummelling drum beats and guitars so molten that they warp driving riffs into volatile shards of soldered metal – and vocals that are painfully spewed forth with such bilious hate that vocalist Michael Berdan sounds as though he’s going to pass a kidney out of sheer anger.

Opening track ‘Tabloid’ kicks the album off with an almost unmatched fury and from here on out there is almost no let up in the intensity.

All of Wake In Fright’s eight vignettes of social disenfranchisement will slap the artisan ham sandwich right out of your complacent hands. An ominous air of foreboding and social crash haunts each track like the oppressive clasp of a dictator tightening its grip. It’s an album that feels angry with you and your life, and it wants to shout in your face. Spitting poisonous venom up your nostrils, whilst pulling your hair and insulting your mum.

That said, third track ‘The lost’ stands out as a rare glimmer of light among the gloomy and uncompromising tales of the wretched. It’s a gothic disco banger no doubt, one that features a deceptively catchy chant-a-long chorus and a groove that would please even the most ardent New Order fan. It’s very nearly a fist in the air moment. Well, it would be if the sky wasn’t on fire. A trojan horse of song which sneaks in a cheeky pop sensibility and nestles it amongst the surrounding avant-punk metal.

The final track ‘The Light at the End (Effect)’ is a truly wonderfully bleak listen. Starting with a spoken word monologue that discusses, with disgusting detail, the decay of ageing and loneliness, it finishes the album on a heartbreakingly tense note.

That Uniform are about to embark on a European tour with envelope-pushing masters of desolate existential metal The Body makes total sense. The Body share Uniform’s extreme reach for disgust-laden hopelessness and a certain way with dramatic whirlwind bombast. To say that these shows are going to absolutely slay is an understatement.

With Wake In Fright Uniform have made a thrilling and genre-pushing sophomore album that paints a dark but complex picture of a world in ruin. As soundtracks to destruction go there aren’t many better.

Kelly Lee Owens kills it on her debut album... 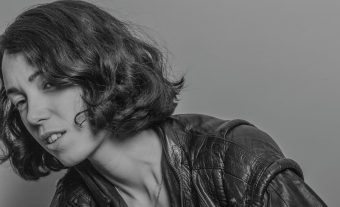