The second full-length record from Vessel titled Punish, Honey is not an easy listen… This is not down to the particularly harsh sonics that he and the label he’s on Tri Angle Records have been recently associated with producing, but due to the record’s ability to generate a creeping wave of pit-of-the-stomach nausea throughout the entirety of its length.

There are still elements of the dub, techno and assorted sound system sounds he and his wide-ranging Bristol collective, Young Echo, are associated with, and those producers and their collaborative efforts are very much a case of ‘expect the unexpected’ in style and genre. This record however, is coming from a new angle entirely; its feel is organic and natural, with a very grubby-fingered human touch all over it.

Which is very much the exact opposite of the highly considered laptop producer fretting over the perfect snare sound. There have been clues to the progression towards this sound shift on 2013’s Misery is a Communicable Disease, which provides the bridge over the murky waters from Vessel’s first full-length Order of Noise to where we end up on Punish, Honey.

The record begins with 10 seconds of silence before the spraying of coarse metallic drums jolt the album into life. This sound of sheet metal is a recurring motif throughout the record, which is held together extremely well by several strong threads such as this. ‘Red Sex’ comes in with a propulsive motorik beat that drives the track along, while some queasy and menacing synth sounds create a pop dynamic that at times calls to mind Suicide. There is a definite feeling of something not quite right permeating the middle section breakdown, before bursting back into life. It’s all quite unnerving, even more so as you’re never quite sure why.

Sex is another theme that runs throughout the record, but it’s a sex that sounds crude, messy and at times violent. The beautiful cover art gives us a clue as to how this may manifest itself, with several figures bound together in flesh; it is hard to determine where one body ends and another begins. The title, Punish, Honey, again takes our mind into the sadomasochism that may be going on in the dark underground of the tracks. The sound of organic instruments rutting under rusted iron sheets.

Something else that holds the record together is the use of homemade instruments created by Seb Gainsbourgh himself. The instruments sound rudimentary but primal and emotive. He explained the use of these instruments on this record in a recent interview by saying, “I just wanted a more clear way to communicate with the audience and that’s why it’s rhythmically quite crude.”

‘Drowned in Water and Light’ is a real high point on the album, with the thrum and lurch of the percussive elements taking over from a rare moment of light and sparkle. The track has lots of room to breathe before being submerged in the throb and scrape of metal of what appears to be guitar. ‘Enuoi’ makes use of the ugly sounds while still maintaining a clear melody. It also recalls moments of Kevin Martin under his The Bug guise, showing that Vessel has not left dubstep and dancehall too far behind.

‘Amina’ is the album’s centrepiece and the longest track, driven by tribal drums and a queasy organ line. There’s a distant choked scream as the track spins like a nightmarish carousel. Again, there is a strong sense of unease caused by something very human here.

The sense of darkness and perhaps torture is now entrenched in the listener’s experience but comes to the fore on ‘Kin To Coal’, with lots of rough metallic sounds. ‘Black Leaves and Fallen Branches’ is a 5am semi-drunken trudge home after some regrettable sex. All organs and metal.

Punish, Honey is a singular record, sometimes difficult to hear but even more difficult to turn off. Vessel is crafting a place for himself among the pantheon of English eccentrics with his unique take on what once was electronic music, but is now something else entirely.

Death From Above 1979 – The Physical World 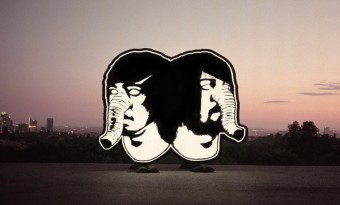 A decade on from the release of their blistering debut, Death From Above 1979 finally return - and we rather wish they hadn't.
Read More