The first time you hear Palehorse vocalist Nikolai Grune scream “This is the last chance” during ‘Half Lizard Half Lizard’, you know that you’re about to be re-caught in a barbed-wire net and dragged headfirst, kicking and screaming into Palehorse’s deserted carpark for an earful of blissful aural abuse. Unfortunately, this lyric also denotes the sad fact that Looking Wet In Public, the fifth album from the London-based, dual-bass noise-fuckers, will also be their last.

But what an album to go out on.

Having announced a small joint tour with the awesome Ghold (their London gig at The Unicorn was probably one of the best gigs I’ve ever been to) the five-piece announced that after 16 years of touring and a run of immense albums, they would be calling time on their reign of ear-bashing.

Though far from being a death knell, a moribund wail into a harsh wind, Looking Wet In Public is quite frankly a fucking banging triumph. Its six tracks split between harsh, bleak bummers (‘The Shower’) and high octane shin-kicking assaults (‘Terrifying Japanese Coldplay Documentary’) lurking together in a perfectly paced fashion, providing the most satisfying Palehorse album to date.

Opening track ‘Half Lizard Half Lizard’ is the sound of rolling destruction given life in song form. Grune’s initial vocal cry is instantly engulfed by the rest of the band in a punishing iron maiden of noise. Co-vocalist and electronics beast Mark Dicker (formerly of horrible-racket-peddlers Trencher) adds an underlay of synthetic din which buzzes around the track like flies on shit. The dual bass riffs from John Atkins and James Bryant swarm in pulses and the track collapses under its own heaviness into a menacing breakdown. Dicker’s cavernous throaty-bark pours disgusted tar-like scorn all over the track in pure disdain. If Grune’s screams sound rueful and remorseful, then Dicker sounds positively hateful, as though the words are forced through pursed, disgusted lips:

“All that I want, is drenched in the eyes / Handprints in wine, and spit on the spine.”

The bleakness and disappointment within the lyrics throughout Looking Wet In Public perfectly reflect the disturbing and troubled social climate which we are currently facing. What with the terrifying and disturbing violence occurring around the world and the rise of the right wing, the recent ‘Brexit’ vote and governmental disarray, the pervading sense of fury and despondency dripping from Looking Wet In Public couldn’t be more apt. But that’s not to suggest that this is an album of po-faced, political anthems. It’s not. It’s an album filled with humour, bleak observations and more riffs than Tory rifts.

For a band with a long history of excellent song titles (see: ‘Shit Columbo’, ‘Look What Palehorse Has Done To Me’ and ‘I Probably Won’t Do That Live’), ‘Miserable Heroin Addict vs. Jehovah’s Witness Guy’ is a strong contender for their very best to date, running a tight neck-and-neck with the equally wonderful ‘Terrifying Japanese Coldplay Documentary’.

Ben Dawson’s mighty drumming on ‘Miserable Heroin Addict vs. Jehovah’s Witness Guy’ is a sledgehammer blow to the dry wall of the cranium. The lyrics again show Palehorse’s dark humour to a bloody tee: “Praising the neighbours for skinning the dogs / Shaking the infant to hear how she coughs”.

Some mention most also go to Wayne Adams (of Death Pedals, Shitwife) at Bear Bites Horse for the excellent production throughout Looking Wet In Public. It can’t be easy to capture Palehorse’s live sound but he’s done a sterling job here, so kudos.

‘Lambs To The Laughter’ provides a drop in pace and is a doomier affair. The mean, dirgey-bass’ point prodding accusatory fingers deep into the metaphorical muscles of the track. The hard drums force the blame back but even they are soon subsumed, as self-reflective synth drones ghost in overhead like a cloud of shameful regret. Layered voices emerge from the mix to flex shame: “You’ve embarrassed yourself”. It builds to a tangle of voices, intertwining into a focal point like the chastising of a drunk on the long-day-after-the-short-night-before. A palimpsest of humiliation.

‘The Shower’, which is probably the best song you’ll ever hear about a depressing shower, is a proper grungy downer, starting off with long-held bass notes and spoken word damage: “Carwash of cigarettes and bourbon stench, false friends revoltingly, alarmingly undressed / Slippery, stained fingers, slip-slide and clench”. The synths send small pre-warnings of the massive breakdown which duly arrives in apocalyptic fashion and the track becomes a pummelling evil chug. “Limp spaghetti / Jeans over handrail / Creaking floor / ITV4”.

‘1893’ puts the album to bed with slow building bass which turns fucking apeshit. As album closers go it’s brutal, making sure the album leaves its mark on the listener in a way only Roy Keane could understand. “Cigar marks / Sobbing strangers fucking in car parks”. It’s funny, bleak, and yes, fucking pulverising: “The abortion clinic opened the day after you were born”.

Nothing about Looking Wet In Public sounds like the work of a band on the verge of a spilt. It’s a powerful animal noise ushered from the collective mouths of one of the most vital brutes in the musical menagerie. The fact that it’s their last is heartbreaking, and I for one will miss these earsplitting bastards. If it really is the ‘last time’ then they really couldn’t have gone out on a higher or more passionate note. 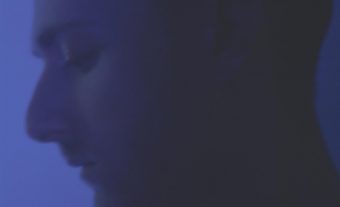 The languid flow of Toronto's River Tiber reaches a confluence on his debut album, the downtempo, melancholic 'Indigo'...
Read More