From the Bosphorus synth-pop of Jakuzi to Saint Etienne’s tales of southern suburbia, sink into the singles currently bubbling up…

Musically this is the most accessible of Arca’s latest batch of tracks – people who know him through his work with Björk will be in heaven. Sadly the YouTube comments aren’t a patch on the ones inspired by ‘Piel’, but credit to user Ed Capos for saving the day with the astute observation: ‘This guy always wants to show his ass﻿’.

‘Caremelized’ is an appropriate name for this slow-burn single from L.A. quintet Dabble. Sweetly viscous, it reaches a deliciously melty conclusion around the three minute mark with a textbook dreamy wig-out. Moreish.

Diagrams – I Tell Myself

Being a miserable bastard, this sort of uplifting musical jollity often winds me up. Luckily ‘I Tell Myself’ doesn’t smugly show off from the sunny side of the street but instead joins you in the drizzly gutter, thus making the gutter not seem that bad after all. If you like the more upbeat songs of Euros Childs or The Divine Comedy this will definitely be your gently steaming cup of tea.

Gorillaz announced their return yesterday with not one but four new tracks. Unfortunately three of them are shite, but ‘Ascension’ has something about it, probably due to being graced by the presence of Vince Staples. Fizzing with energy, Staples spins wildly between anti-government antagonism and perving on Missy Elliott – Damon’s 2D alter ego can only offer a few limp bars in response.

H.Grimace – Call It Out

Chiming guitars, cracking artwork and an assured vocal from Hannah Gledhill, ‘Call It Out’ is another ragingly good single from H.Grimace, even if the subject matter (‘it was initially a response to a friend who had been drugged at a party but couldn’t name the perpetrator’) is as depressing as the music is enlivening. Their debut album Self Architect is finally out next month, pre-order it from Opposite Number here.

The latest single by Puerto Rican septet ÌFÉ is inspired by Yoruban God of War Orisha Ogún, although you’re more likely to be slayed by the fiery rhythms than any errant machetes. Another group with a new album imminent, although this one you can stream over at NPR right now. You lucky buggers.

The best single to date by Turkish synth-poppers Jakuzi, and it’s every bit as warm and bubbly as their name would suggest. While Erdoğan descends ever deeper into dictatorial lunacy, bands like Jakuzi, whose gigs are described as ‘a safe place for Turkish punks and goths but also for people of alternative sexuality’, are more vital than ever. Londoners can dip their toe into the band’s vivid sound at The Shacklewell Arms on June 1st.

Kendrick Lamar’s comeback track has garnered even more attention than you’d expect, thanks to certain subtle disses towards Drake (as well as more obvious slap-downs of Big Sean and Donald Trump). Sadly the track doesn’t possess quite the same intensity as the lyrics, sounding pallid in comparison to Lamar’s faultless last record Untitled Unmastered. Luckily it would appear we only have to wait a fortnight for some hopefully higher quality offerings…

Never been a big fan of Nite Jewel to be honest, but this is slick. Possessing the same retro pop sparkle and poolside party atmosphere as last year’s brilliant Caspian Pool single ‘It Doesn’t Matter To You’, this should be played every time the sun breaks through the clouds this spring.

You’ve got to love Saint Etienne, even if like me you’ve never totally fallen for their music. Ever self-aware, the band’s new album comes adorned with stickers declaring things like ’16 SONGS ABOUT SOUTHERN ENGLAND’ and ‘LARGELY RECORDED IN BERKSHIRE & KENT’. ‘Heather’ takes a typically unconventional look at the underbelly of suburbia, referencing the Enfield Poltergeist over a rather catchy electro-pop backing.

I somehow missed this new single by erratic Californian twins The Garden when it was first unveiled, but having been lucky enough to see them at the Scala this week (review forthcoming) I can reveal that ‘Clay’ sounds absolutely banging live. The Garden are generally at their best when mixing off-kilter keyboard hooks into the malfunctioning tumble dryer of their music, and that’s what we get on ‘Clay’ – even if the chorus’s ‘cereal killer’ pun is a bit cringy for anyone living within cornflake-spitting distance of a certain Shoreditch cafe…

Another screw-loosening track that initially went under the Monitors radar. It’ll surprise no one who’s heard The Physics House Band that ‘Calypso’ doesn’t sound much like Mighty Sparrow, but the Brighton trio have never been ones to do the obvious thing when it comes to genres, arrangements, time signatures or pretty much anything else. ‘Calypso’ rockets past with a rail-rattling combo of snare hits, bass riffs and jazzy melodic percussion, not so much taking your breath away as leaving you winded and gasping for air.

Single-Minded: Stop, look and listen to Do Make Say Think 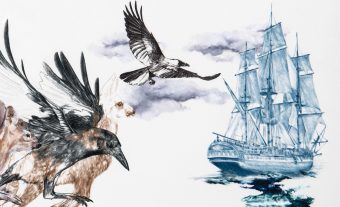 From the triumphant return of Do Make Say Think to the latest lacerating cut from Noga Erez, dip your toe into some of the most significant recent releases...
Read More