From the triumphant return of Do Make Say Think to the latest lacerating cut from Noga Erez, dip your toe into some of the most significant recent releases…

I was a big fan of alt-J’s first album but, as previously expressed on these pages, the follow-up was a massive let-down. Still, they’ve had the best part of three years to reassess and learn from their mistakes, so surely their comeback single will be another catchy odd-pop caper in the vein of ‘Breezeblocks’ or ‘Fitzpleasure’, right? Wrong. Oh so very, very wrong. ‘3WW’ basically sounds like random bits of your parents’ record collection – Massive Attack, Baaba Maal, Neil Diamond, The Doors, a Spanish flamenco CD bought as a souvenir from Mallorca and a CDR from that folk band that played in the local pub recently – shoddily stitched together into a tatty beige quilt. The song the expression ‘meh’ was coined for.

Apparently ‘Cash Out’ was inspired by a deathlike drug experience experienced by CO/NTRY’s Beaver Sheppard, following a sudden bout of unemployment. If you’re in a band (preferably the band alt-J) then you should immediately quit your job and call your nearest designer drug dealer, as it appears to be a winning formula. A melding of The Cure with Gary War, passed through a ketamine-flavoured filter.

Having not listened to Canadian post-rockers Do Make Say Think for ages, I recently happened to pluck a second-hand copy of their 2003 album Winter Hymn Country Hymn Secret Hymn from an online vinyl sale. Just days later the band suddenly announced their return after eight years of studio silence. And how. ‘Bound And Boundless’ is the equal not only of any track on the brilliant Winter Hymn…, but of anything Do Make Say Think have ever done. Over twelve swooning minutes they take you on a triumphant journey through sparkling vistas and craggy peaks without a single misstep, demonstrating a vivid confidence that seems to radiate from within. It’s a remarkable recording. Don’t do, make, say or think – just listen.

Rocket Recordings expand their increasingly global outlook with Gnoomes, a Russian trio whose unshrinking psychedelia naturally bends towards the label’s orbit. ‘City Monk’ is one of the most effortlessly fluid tracks on their recently released album Tschak!, sounding like Deerhunter’s ‘Cryptograms’ if performed by a blissed out Simeon Coxe.

Experts, eh? WE’VE ALL HAD ENOUGH OF BLOODY EXPERTS RIGHT? Oh no wait, it’s poor quality insoles we’ve all had enough of. Not many fans of experts around these days either though. Luckily Hey Colossus are back to take issue with the wilful ignorance and obfuscation that are increasingly defining our era, and doing in typically robust style. ‘Experts Toll’ is significantly more tuneful than previous releases, continuing their progression towards more melodic territory but without abandoning the amped-up engine that got them there.

The movie theatre strings and pitched-up guitar licks make ‘SORE LOSER’ sound a little like an old MF DOOM production, and Chicago rapper International Maverick has a similar knack for wordplay (and penmanship, apparently). He may not mind paying extra for it, but really this guy should be getting free guacamole wherever he goes.

Another impressive cut from Noga Erez’s forthcoming debut on City Slang, ‘Toy’ may not be as immediate as the devastating ‘Dance While You Shoot’ but it has the same strikingly bold production. Noga Erez’s vocals weave in and out of the mix while the bass throbs and the beat shatters as if it’s been thrown into a bottle bank.

Show Me The Body – Trash

‘Trash’ sounds like the backstreet splicing of Slaves with Fischerspooner, which is not a combination many people can ever have wished for. As per usual with this lot, it’s difficult to decide which side of the fence to fall on, while the fence itself is crowned with razorwire. This track makes me err towards the pro-SMTB side, but with the fear that I’ll soon be crawling back.

Intro (and outro) of the week, if not the year. The rest of the track’s not bad either, a palatable indie disco number with a snazzily upturned collar, even if it can’t help but feel slightly plodding after the madcap first thirty seconds.

If 12″ mixes had been a thing in the sixties, this is what every psych/garage single back then would’ve featured on the b-side. While eight minutes does seem like it’s going to be a bit of a stretch at the beginning of ‘Sugar Tastes Like Salt’, you’ll likely still be wanting more by the time it draws to a fuzzed-up close. Tasty.

Electro-pop designed for the sunniest of days, it seems almost rude to listen to the debut track from Liverpudlian band Two Islands from anywhere other than a poolside sun-lounger. Boasting crystal clear synths and guitars, ‘Heaven’ could almost be moored up in the inviting waters of Metronomy’s English Riviera. 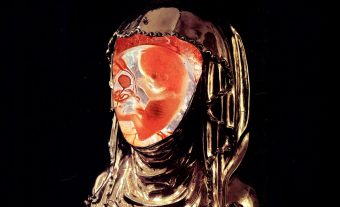 January's round-up of EPs comes a little later than usual, but from of Montreal to Oma Nata these eight greats were worth waiting for...
Read More