In a society where youth and the pursuit of youth are of constant primacy, cynical artists often look to collaborate with the latest teenage sensation in the hope of livening up their own profile. In many cases it’s like a musical version of a dodgy anti-ageing injection where the patient is pumped full of virgin plasma, only for the results to prove negligible.

Well, no one can call Sam Genders cynical. The Tunng and Throws co-founder, who releases his solo work under the name Diagrams, has done the opposite in fact. Having fallen in love with the work of 90-year-old poet Dorothy Trogdon, Genders spontaneously wrote a song based on one of her poems, and thought he might as well email her to see if she was keen on working with him.

The affirmative answer soon came back from Trogdon’s home on Orcas Island and, aided by a £2,500 PRS for Music grant, The Dorothy Project was born. “We live in a culture that focuses a lot on youth and it was refreshing to engage with someone of an older generation”, says Genders, while Trogdon’s take on the project is worth quoting in full:

“The poems were out in the world seeking a reader, met Sam Genders who replied with music and a conversation began. Which is how all creation starts. We make nothing new alone. When wind blows through the trees, the leaves rustle. I saw how the wings of Sam’s music would carry my words far beyond my little island and I was glad. Now words and music are friends and shall go forward together.”

The pair are looking for funding to complete the mastering, manufacture and promotion of the finished album. That’s where you come in. Genders has started an Indiegogo campaign to help raise the money, and for as little as a quid you can help the unique collaboration reach the biggest audience possible.

Take a look at the Dorothy Project campaign video and listen to ‘It’s Only Light’, the first track to be released from the sessions, below. Then head over to Indiegogo to donate and keep track of the process. 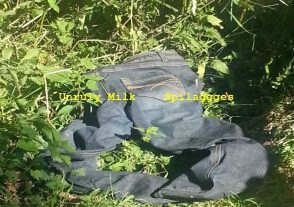 Somerset foursome Unruly milk mop up the dread-sweat 'Spilaggges' of a coming winter and filter them through a dark teat of ominous patchwork psych-folk, squirting the residue directly into your ears. Made up of Joe Thompson (who also does the bass with the incredible Hey Colossus and Henry Blacker), Kek-W (of car-boot electronic trio Hacker Farm), Elisa Thompson and Stef Giaccone. 'Spilaggges' is 12 tracks of short nocturnal lo-fi horror and is a perfect blast of Halloween soaked fear which I highly recommend to accompany any nocturnal pumpkin lit walks you may partake in during these cold pre-winter moments. Tracks like the jittery Black Pamplets and The Journey To The End Of The Night will make you feel like you're chilling out for an evening in the cabin from Sam Raimi's 'Evil Dead 2'. Elsewhere the sweet moonlight captured folk of Amabassadeurs and the glacial shimmer of The Woods Near Albi sound like being trapped inside a fucked-clock as the hands of life slowly tick time away. https://soundcloud.com/blackcat_records/amabassadeurs It seems there's something wonderful lurking in the brisk Somerset air. Check out http://nwoslf.tumblr.com/ for more Somerset goings on. As Joe Thompson himself puts it: 'This Unruly Milk album is 12 tunes, not too long, and is us playing music with friends. It is what it is. Fuck knows.' I really couldn't put it any better myself. 'Spilaggges' is available in a limited run of 100 CDs from Blackcat Records. Go and sup it up it's creepy goodness from here: http://blackcatrecords.bigcartel.com/ Luke O'Dwyer
Read More