Right, I don’t want this review to become hagiographic (thanks degree, yeah I went to university and what?) but I’m going to come straight out and say it, bold as brass: Hey Colossus should be anointed as saints for creating Radio Static High.

Now I’m not religious in any way, shape or form, so this saintly canonization will only manifest itself as a metaphor for comedic/linguistic effect within the passages of this review/sermon, but in the imaginary Church of Luke (parishioners – 1), all six members of Hey Colossus have been immortalized in brightly coloured stained glass and shoved high upon the walls. Its looks well fucking beautiful.

Coming only a few months after the immense In Black and Gold, Radio Static High feels like the culmination of years of hard graft during which Hey Colossus have explored a diverse but generally very heavy sonic furrow.

Since the claustrophobic RRR their sound has slowly coalesced, and with Cuckoo Live Life Like Cuckoo and In Black and Gold the songs had begun to adhere to more rigid structures and tighter, tauter instrumentation. Vocals were becoming more prominent and even, dare I say, sung.

Now, with Radio Static High, Hey Colossus have brought their songs into sharp focus. Whereas once songs drifted in and out of a woozy consciousness, here there is a real efficiency that works to bind together their twitchy, agitated brilliance. From here on in there really is no holding Hey Colossus back. Bow down and worship.

So at the risk of dumping the contents of my love spuds all over my keyboard and embarrassing myself (if I haven’t already), this album is astonishingly good. Like really, really good yeah?

If you’re one of the unlucky people who actually know me in the real world (outside of this 2D alphabetic intron-net world), you’ll know that I’m a cynical, bad tempered, hateful, unpleasant troll. For me to uncontrollably gush on the internet like some unkempt teenage Twilight fan takes some doing and I don’t like to make a habit of it. Radio Static High is making me grubby myself with pleasantries and praise like some cheerful goyt, but here it’s fully deserved.

Radio Static High is as accessible as a screw-top bottle of wine and will make you feel just as warm after a few ear glugs, even if you aren’t a raging alcoholic like me. (Where’s that communion wine?) Years down the line, whatever is left of your human society will look back at Radio Static High and consider it a classic, not just of ‘metal’ or ‘noise’, but of music. Like Unknown Pleasures, The Stone Roses, Different Class and Craig David’s Born To Do It. Classic. It just sounds right.

That’s not to say there’s been any watering down of the Hey Colossus sound to make their music palatable to twats. They haven’t. The album is still heavy where it needs to be, but here everything has been finely tuned and structured in a way that allows each song a directness and clarity, each instrument given full space to work totally in unison with their repetitive grooves.

See the wonderful glam stomp of ‘March of the Headaches’, which features a bass line from Joe Thompson which is so devastatingly volatile it should be suspended in concrete and dumped in the North Sea. It is, to put it simply for you, a fucking big tune. Rhys Llewellyn’s drumming will crush your skull.

‘Hop the Railings’ is pure excellence; it’s even made it onto BBC radio. It makes me want to dance, which I never thought I’d be saying about a Hey Colossus song. The intertwining guitars from Robert Davis, Jonathan Richards and Tim Farthing fizzle and shift like Joy Division at their most paranoid, and there’s a wonderfully shifty groove which builds to a climax like the slowly diminishing time on the clock-face of a nitrogen bomb.

‘Memories of Wonder’ is full of sad regret, like a lost cowboy wandering the burnt out wastelands of a desert. Paul Sykes’ gentle vocal lulls and soothes with a remorseful delicacy as guitars crash and chime away at the horizon, tearing and folding the whole song back in on itself.

Honestly, there isn’t a song on this album that isn’t a fucking belter, and I could talk about them all in great detail. But I wont. ‘All killer no filler’, as they used to say. ‘They’ being Sum 41, and they know what they’re talking about aye?

If the album starts on a delicate woozy lilt with the self-titled opener then it ends on a fucking massive all-out assault with ‘Hesitation Time’ and ‘Honey’. Both feature dirty great bouncing basslines and demented hex-eyed shaman vibes. Remember that bit in The Legend of Zelda: Ocarina of Time when the Big Goron chief does his whacked-out joy dance (of course you do), well ‘Honey’ makes me want to do that all day, over and over.

Put simply, Radio Static High is the sound of a band hitting their stride. You’d better get in step with them or get trodden on.

Sometimes you just have to nail your colours to the mast. Well I’ve nailed them to it so hard that I’ve punched a fucking massive hole through it.

Now I shall be passing around the collection pot, so give generously or fuck off. 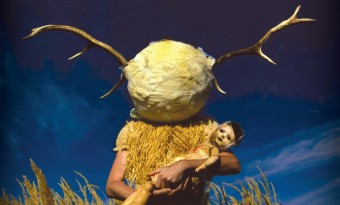 Evil Blizzard get a Haiku Review, harking back to a time when Glastonbury was about breaking in and bad acid rather than steel fences and Clean Bandit...
Read More