From the devastating production of Duck Fight Goose to the return of Pimp Shrimp, this week’s Single-Minded hosts a particularly diverse and defiant menagerie…

If their S&M-obsessed EP from earlier this year felt a little Death Grips-lite then Clipping’s latest certainly sets out a more original stall. Keeping the intensity of their previous releases but showcasing a little more focus on producing a structured track, ‘Air ‘Em Out’ has me pretty optimistic about the upcoming full-length, and comes accompanied by a great, eerie, zero gravity video. Nicholas Burman

With artwork like that I was expecting something with a bit more of a drum’n’bass rhythm. ‘2am’, with its neo-soul vocals and crescendoing, maximalist synths, couldn’t really be more different from my expectations. I like it because it feels genuinely positive, in a cheesy grin sort of way, but I imagine for some that will be its downfall. NB

We interviewed experimental Shanghai quartet Duck Fight Goose on our MusicMap sister site recently, and ‘A Nation of Disillusion’ sums up what makes them so special. Mixing the high-octane beats of late-nineties era Warp Records with surgically lacerated vocals and the odd dubby flash, it’s one of twelve equally tasty treats available on their new album 未来俱乐部 CLVB ZVKVNFT (head here to sample). Kier Wiater Carnihan

Ela Orleans – You Go Through Me

The latest Ela Orleans album is an epic piece of work taking in both the upper and lower circles of Dante’s hell (as opposed to the previous album, which only covered Upper Hell but in fine style). ‘You Go Through Me’ quotes Dante directly – “Abandon all hope, ye who enter here” – although the actual sound is much more inviting, featuring heavenly organs augmented by guest vocals from Stephen and Katrina from The Pastels. KWC

An unlikely pairing, although I guess they both have a history of sticking simplistic melodies into our heads. However, this track doesn’t really play up to those strengths (the vocal sample is crap), and it seems that all they’ve done is come together to produce a random electro house tune. I’d imagine this could be the best track in a Skrillex set in 2016 but probably not even in Oizo’s top 10. NB

This is my favourite track from Finnish four-piece Oddarrang’s recent Agartha album, full of assured dynamic shifts that remind me of Do Make Say Think at their finest. It might be inspired by Admiral Richard E. Byrd’s apparent discovery of another world within the Earth (google it if you want to fall into a pretty weird internet wormhole) but there’s nothing hollow about the music. KWC

Taken from another album worth checking out, the mercurial Sweet Sweet Morning, ‘The Dust’ finds Montreal’s Piith at their most floaty and intangible. Like an out of body experience, it manages to take you elsewhere despite resolutely rejecting any obvious hooks. KWC

Is this a video for music or is this a video with music? Has this accidentally been released ten years too late? What’s going on? I can’t tell but I don’t like any of it. NB

Bronx rapper Quay Dash brings gusto to ‘Wilin”. Her steamy vocals add oomph to a scattered beat and the whole thing comes in at a punchy 2:40. When a track has you reaching for the replay option you know it’s done its job. NB

One of those tracks that seems like it’s constantly folding in on itself, in a good way. Spoony Bard’s fairly low-in-the-mix vocal provides a trail of breadcrumbs through the psychedelic, Brainfeeder-friendly forest of splintered beats and quicksand synths. KWC

The Return of Pimp Shrimp – FEEL SAFE 88 (just say no)

A New Place 2 Drown, Archy Marshall’s very underrated LP from Christmas 2015, was a bit of a light bulb moment for me and the artist formally known as King Krule, not least because I felt you could hear some raw emotion coming through the speaker. This new release (ridiculous pseudonym and all) takes him a little too close to washed-out blandness for my preferences; I like it when you can can nearly hear the phlegm in his throat. NB

I’m not the best person to be reviewing jazz, but this track has a nice lean-back atmosphere to it, even if I’m never a fan of that squelchy key tone. Sounds a little like an extended Flying Lotus b-side circa Cosmogramma, and that’s no bad thing. NB 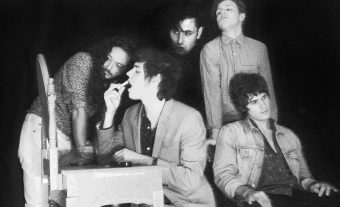