Got yourself a ticket to the upcoming Raw Power weekender organised by Baba Yaga’s Hut?

If the answer is no, what are you doing? Do yourself a favour and get one – you will not regret it. Well, unless you’re a Coldplay fan and the idea of asinine boredom is totally your thing. Though saying that, there’s bound to be something here even for you.

For the weekend of August 29th-31st, Baba Yaga’s Hut will be moving away from their usual South London haunt of Corsica Studios and transforming Tufnell Park’s Dome and Boston Arms into the most diverse, interesting and just plain fucking excellent music festival you could possibly hope to speculate about in your most imaginative and self-assuredly creative dreams (well done you).

With only a few weeks to go, I asked organiser and all round good guy Anthony Chalmers a few probing and deeply insightful questions to get a taste of just how righteous it all will be:

What made you expand the traditional Baba Yaga all dayer into a weekender?

“I was just thinking big basically!”

And big it is indeed. Sod Glastonbury and all the other standard boring dad-rock festivals out there; Raw Power has a line-up to kill for. Not literally please, I have enough lawsuits to fight already on my own.

What prompted the move from Corsica Studios and how did you choose The Dome and Boston Arms as its new home?

“We needed somewhere that was a bit bigger than Corsica as we didn’t think we could fit everyone in there. I spent a lot of time thinking of different venues and we viewed several warehouses that we would set up from scratch, but in the end we felt that The Dome & Boston Arms fit our needs really well.”

With such a wide and diverse set of bands lined up, how did you choose the bill?

“It was a mixture of our audience’s favourites and acts that I want to be their favourites.”

“Definitely; Ela Orleans & Richard Pinhas spring to mind. Would have been The Comet is Coming too but I just saw them in Portugal and they were AMAZING!”

This is certainly a festival to uncover a few unknown gems.

Kicking off on the Friday with a cracking evening of psychedelic space-rock featuring Thought Forms and The Oscillation, headlined by the legendary avant-poppers Clinic, it’s pretty much wall-to-wall goodness and shouldn’t be missed.

As if the Friday wasn’t enough to get the mouths inside your ears watering, Saturday has a demon line-up headed by psych-rock barons Acid Mothers Temple, flanked by post-rock-prog-voyagers Teeth of the Sea and the blisteringly brilliant kraut-drone overlords Hey Colossus.

I’m certainly looking forward to taking an ear-bashing from these bastards. If that wasn’t enough, you’ve got insane math rock via That Fucking Tank and the brilliant post-punk danceness of Shopping.

What more do you want? Lots? Good, because that’s just a selection of Saturday’s fine, fine goings on, as there are many more bands wrestling for your attention.

“It’s two stages & an outdoor food & drink area,” explains Anthony. “There aren’t any clashes. One stage starts and the other finishes.”

Bo Ningen headline Sunday, with a support bill featuring pure rock goodness from Mainliner and Bad Guys. I’m chomping at the bit to see Dublin’s premier noise-punks Girl Band for the first time; if all reports are to be trusted (and they are) they should take the roof off.

The ridiculously awesome Henry Blacker, whose album Hungry Dogs Will Eat Dirty Puddings is one of my albums of the year, will grab at your face with their filthy noise rock claws until you submit and melt down into the sludge with them.

And that’s just the bands in attendance, there’s also the promise of DJs, film showings and a BBQ! All in the comfort of North London. I mean seriously, how much more persuading do you need?

Check out the line-up for yourself and weep at the fact that you’ve been given this chance. With weekend tickets only £50 it’s an absolute fucking steal (again, please don’t steal, do I have to mention the court cases again?).

If you don’t fancy the entire weekend get yourself a day ticket (Friday’s only £15) and allow yourself to have fun – just remember, you’ll be back in the office on Monday.

So could this become an annual event?

“Could very well be!” teases Anthony.

Miss this and you will hate yourself, and so will I. Don’t let me down now. 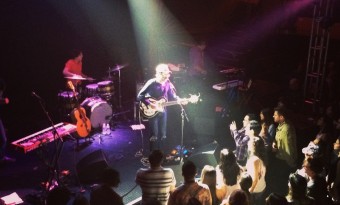 An unusually quiet and attentive crowd watched Clap Your Hands Say Yeah prove they can survive and prosper even after the loss of several members...
Read More