Christian Fitness – Happiness is not for Amateurs

The recent referendum has not, to date, precipitated the triggering of Article 50. What it does seem to have triggered is an intense period of reflection on what Britain and Britishness actually means. I’m not 100% sure whether this latest track by Christian Fitness (the solo project of notorious Future of the Left and Mclusky frontman Andrew Falkous) was explicitly inspired by Brexit, but the sorry tale of a racist incident on a train feels uncomfortably familiar given the increased incidence of hate crimes since the vote. Which makes it sound like a depressing listen really; luckily Falkous’ typically cutting lyrics and an absolute beast of a bassline cause it to get the blood boiling in all the right ways. Kier Wiater Carnihan

Judging by this and the last Wand single, Cory Hanson seems to be mellowing. I’m not convinced this is a good thing; while the string intro to ‘Ordinary People’ is breathtaking, the song itself feels trite and laboured in comparison. Hopefully someone pours some ants back in Hanson’s pants soon. KWC

Although many articles this week have focused on the success of Frank Ocean as an ‘independent’ artist (read: jumping ship from A&R interference after lots of marketing support), it’d actually be a little more realistic to see Crystal Fighters as a true ‘indie’ success story. Consistently playing large-ish shows to their dedicated fanbase, while relying on very little radio or press. While this track sounds like a bowl of sugar covered in alcopops, it’ll keep the fans happy, and when you’re an independent artist that’s all that really matters. Nicholas Burman

As a bit of a Danny Brown fanboy the Detroit rapper could probably just do another song about Heineken and I’d be happy. Based on the two lead singes, his upcoming LP is already sounding like the party-hard persona from XXX and Old has taken a trip down a particularly slimy sewer, and the results so far are a darker, more subversive take from the fellatio-loving one (with the likes of Evian Christ instead of Rustie on production duties the change in atmosphere isn’t too surprising). Any fair-weather fans made with ‘Dip’ are likely to run a mile from this. NB

Like Micachu & Tirzah’s minimal smasher ‘I’m Not Dancing’, your enjoyment of ‘Living in XTC’ will probably depend on your appetite for nonchalantly detached vocals. Personally I’m finding myself hungry, although it helps that those pads in the background are so damn appetising… KWC

Possibly inspired by Mexico City’s historical district namesake, Coyoacán doesn’t actually sound too Latin. Instead Leonard combines flirtations of piano and a crackling drum machine loop to add weight beneath scratchy samples. I’d actually really like to hear this instrumental on its own and extended, but then that means he’s successfully learnt that, more often than not, less is more. NB

I’ll be honest, the vocals here don’t do a lot for me. Luckily the bass and synths really, really do. KWC

If you like your post-punk short, bittersweet and with plenty of gothic horns, then this tune is indeed very good. In the same way their name turns one of Spain’s most commonly spoken positives into a drooling mess, Muuy Biien turn art rock into a drunken one (so pretty much The Fall, basically). NB

Protomartyr – Born To Be Wine

I didn’t really get into Protomartyr’s last album, but the beautifully discordant patches of ‘Born To Be Wine’ perfectly capture that moment when a jolly shindig turns into boak-strewn carnage. Adult Swim’s singles club has thrown up some beauties recently (check Earl Sweatshirt and Knxwledge’s ‘Balance’ for an even more recent example), but this might be the best yet. KWC

It’s perhaps surprising that more bands aren’t directly engaging with the issue of small venues disappearing, seeing as they’re the ones most likely to suffer from it. Praise be to Revenge Of The Psychotronic Man then, for a track that explicitly asks the question “Where will we go when we don’t have any venues?”. The video meanwhile is a tour through Manchester’s lost (and possibly soon-to-be-lost) venues, emphasising just how fragile the situation is. I’m not sure ‘Hectic Danger Day’ is the most fitting name for a day dedicated to saving our creative spaces, but lord knows we need something. KWC

Black Acre have probably been one of my favourite independent labels of the last couple of years, and ‘Facts’ shows why. Samba-inspired percussion meets spacious production, giving Nico Lindsay plenty of room to spit in a style that manages to seem laid-back despite a crucial sense of timing. (The b-side is great too.) KWC

Wolfgang Tillmans – Make It Up As You Go Along (SALEM Remix)

Witch House was always an absurd genre, but it might’ve just about worked if most of the music associated with it hadn’t been ludicrously shit. Proclaiming Salem as one of the better Witch House acts is to damn them with extremely faint praise, but even that’s a sight more than this embarrassingly gauche mess of sirens and screams deserves. KWC 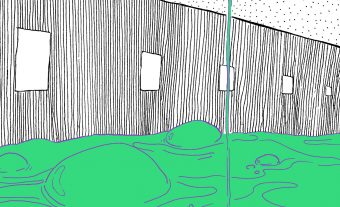