Teleman’s sanity is not something you’ll call into question when listening to their new album Brilliant Sanity. It’s clear from the off that this album has been thoughtfully put together with as much care and attention as a sane mind can muster.

Brilliant Sanity is Teleman’s follow up to 2014’s Bernard Butler-produced debut, Breakfast. The London-based quartet comprise of brothers Tommy (guitar and vocals) and Jonny (synths) Sanders, Pete Cattermoul (bass) and Hiro Amamiya (drums) and the eagle-eared amongst you may recognise elements of their sound from now defunct indie band Pete and The Pirates, which included several members of the current Teleman line-up.

‘Dusseldorf’ opens the album with a confident swagger and sets out the band’s agenda nice and early. Keyboards sashay and saunter around buzzing guitar parts, causing electric jolts of new wave fun.

It’s a perfect showcase for Brilliant Sanity’s knack of catchy hooks and clever structures. Why, it includes so many hooks you’ll think you’re watching 1980s Clive Barker masochism-fest Hellraiser. The driving bass and drums of ‘Dusseldorf’ crumble off into the rougher waters of the slower, darker piano opening of ‘Fall in Time’, which builds and builds with subtle menace, before erupting in a huge chorus of “Can’t afford, can’t afford not to fight”, bursting in a volcanic release of tension.

‘Glory Hallelujah’ is spine-tingling, like having weightless naughty times with a filthy astronaut. Houston, we have a very rude problem. It’s an absolute belter and has single written all over it like a member of match.com. As I say, the shimmering keyboards send shivers up my badly postured spine and when Tommy Sanders sings, “Thank you for your call, call, call / You make me lose my cool”, It makes me want to swoon like a ready-to-mingle, well-to-do medieval maiden.

Sanders’ voice falls somewhere between Neil Tennant cool iciness and Stuart Murdoch’s fey delicacy. Teleman also share both bands’ careful knack for an arty melody. Polished and slick, Brilliant Sanity pops off shot after shot of perfectly nurtured intelligent-pop, fired with an alarming accuracy. Killers armed with feathers. It has lipstick all over its collar.

‘Daddy’s Shoes’ is reminiscent of Darren Hayman’s delicate electric folk-opera Pram Town, with its twinkling, innocent beats hiding a confident swagger. Every song is a gem of indie-pop handicraft. Stick almost any of these songs in an indie disco and I’d get dancing to it. I know the image of an indie disco now sounds like a bunch of floppy-fringed students moping about in the dark, avoiding eye contact and wearing corduroy over coats, which to be fair it was, but this album has enough stomping razzmatazz to coax even the most frownsome sulky git to the dancefloor. By that I mean me.

‘Tangerine’ beefs things up a bit. Which is a bizarre sentence to write. It adds a harder guitar to the chiming keyboard. Don’t get me wrong it’s not Sepultura but in the context of the rest of the album it adds toughness to the albums’ at times glacial sway.

It’s an album that represents both sheer confidence and delicate vulnerability. As I sit listening to it on the night train, a man opposite scrapes dog shit from his shoe. His girlfriend has florescent pink hair. He’s crying. She’s not. Tears fall on a grey Adidas sweater; this is not the glamorous night that the bright colour would suggest she’s looking for. His shirt says ‘Tours’. His eyes say tears. “Falling like everyone else” begins the opening lyrics of ‘Canvas Shoes’ and it all seems particularly fitting.

Vulnerability and confidence wrapped in the same skin. Teleman have created an album that perfectly captures this duality and with some bloody danceable tracks to boot. Brilliant sanity, indeed. 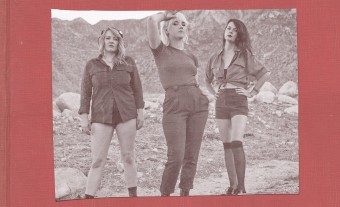 If the first Bleached album was a hazy summer day in Southern California, 'Welcome the Worms' shows us what happens once the sun goes down...
Read More