Daniel Dumile is a man whose elusive alter-ego, MF DOOM, has had an unparalleled influence on hip-hop in the past decade or so. DOOM is so important to modern hip-hop that in the future, the genre might as well be categorised as Pre-DOOM & Post-DOOM. This may sound ridiculous, but it’s just fucking true.

One of the most revered rappers in history, DOOM’s lyrical dexterity and distinctive, crude production style have always set him apart from the others, earning him a ferociously loyal and obsessive fanbase. It’s hard to write subjectively about Dumile’s new work due to the sheer weight of his reputation, the fact that chatting shit about DOOM is seen as heresy amongst spotty hip-hop heads, inexcusable blasphemy punishable by death.

So, in order to bypass any awkwardness or bias here, I’m going to start as I mean to go on: As a DOOM fan of many years, I can honestly advise anyone reading NOT TO BUY THIS PIECE OF SHIT.

NehruvianDOOM is a collaborative album with Bishop Nehru, a New York whippersnapper who is still earning stripes in the US. Many hungry DOOM fans will undoubtedly be horrified by the new album, and I expect many will feel cheated. Talk of a “new DOOM joint” saw tongues dangling and tails wagging, thousands of earnest fans eagerly anticipating a whole album of brand spanking new beats. But there isn’t really anything new here, and some beats are lifted directly from the Special Herbs instrumental box.

DOOM is a slob who seems to be making the most of his London residency, Brian Wilsoning it up. The days of his steaming, superhuman production line are over; he is living the comfortable life, regurgitating rhymes and old beats for cash. It seems as though the majority of ‘production’ work Dumile did for this album consisted of him sitting in a sweaty vest, smoking blunts and emailing old beats to Bishop Nehru in exchange for cold hard cash.

Nehru broke through in 2012 with his first mixtape, followed by the acclaimed StrictlyFLOWz the following year. I have seen Nehru compared to A$AP Rocky and Earl Sweatshirt, and was interested to see how he displayed his skills on this new album with DOOM, surely a golden opportunity for any young MC only two years in the game. But one wanders what attracted DOOM to the young Nehru, who is quite simply in a different league, and not in a good way. His flow and delivery are monotone and his lyrics, although occasionally impressive, are forced.

DOOM makes a couple of appearances spitting on the album, but even he isn’t powerful enough to save the show. His voice sounds wider and muffled, inefficient and bloated, as if his larynx has become coated with extra mature cheddar residue and lumpy chocolate milkshake.

It isn’t all bad, and ‘Mean The Most’ and ‘So Alone’ in particular are stand-out tracks. However, they are ruined (like most of the tunes on NehruvianDOOM) by cheesy hooks and chorus lines, never previously tolerated on a DOOM record, collaborative or not.

A thoroughly disappointing, half-arsed production job from DOOM and thoroughly forgettable bars from the forgettable Bishop Nehru. DOOM is winding down, and this album signifies the climax of a reduction in quality that really started with Born Like This. Such a reduction of quality can, of course, occur naturally. However, the more worrying cause is that MF DOOM simply doesn’t give a fuck anymore.

Despite all the glowing reviews you will read, if it wasn’t DOOM at the production desk it would be a very different story. Music journalists spend so much time sucking on his salty testicles that they don’t even realise he is taking the piss out of us all. DOOM is having his cake and eating it, then stealing everyone else’s cakes and eating them too. The fat lazy cunt.

Thank you and goodnight. 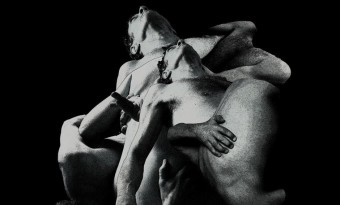 Harsh, menacing and shot through with a palpable sense of unease, Vessel's latest album is hard to listen to, but even harder to switch off...
Read More