Disappears are one of those bands that have dwelt on the edges of my consciousness for what seems like forever. In much the same way, in fact, as sharon fruits: I’ve been aware of their existence and thought they sounded interesting enough, have even had a little taste on occasion, but they’ve never left enough of an impression on me to ever seek them out directly.

That’s all changed with Irreal. We’ve had an uncommonly good musical opening to 2015, with superb albums by Ghost Culture and Panda Bear already on the board, but this surpasses both of them. Across eight atmospheric tracks that aren’t so much heard as crept through like some sort of skulking spook, Disappears’ fifth album deserves to massively increase their visibility.

It’s a ghostly type of industrial music, in the sense that it echoes with the rattle and thump of heavy industry, ‘Interpretation”s 5/4 beat kicking things off with a shimmering metallic pulse. Brian Case’s barely intelligible murmuring provides a little human texture in the rhythmic fog, but it’s Damon Carruesco’s measured bass that provides the subtle engine underneath it all.

The inextinguishable fever of ‘Another Thought’ sees the percussive elements bubble up like a volcano preparing to erupt, before title track ‘Irreal’ rips a page right out of the Michael Gira playbook. Full of monstrously twisted repetition, if it had a face it would be fixed with a thousand mile stare that could burn right through you – up until the halfway point at least, when its eyes shut and the song drifts upwards into a surprisingly meditative coda.

The sinister gloom of ‘OUD’, named after (but not obviously featuring) a type of Turkish lute, would risk descending into pastiche were it not for the insidious, echoing thrum that gradually covers it like rampant bacteria. The opening fill of ‘Halcyon Days’ then shatters that skip before it gets too nightmarish; yet while the mood remains ominous, the execution here is much more impressive. While ‘OUD’ enters your room like a hammed-up Nosferatu, ‘Halcyon Days’ slowly fills your room with noxious gas while you sleep.

‘Mist Rites’ has a similarly suffocating feel; listening to it is like being sonically vacuum-packed. If Irreal is a factory, then this is the sound of it being broken into by cloaked figures at midnight, while a thousand rats scatter into the shadows.

Considering the whole album feels like it’s being slowly sucked into a black hole, the title of the closing track seems especially appropriate. ‘Navigating the Void’ uses (gasp!) major intervals to pick a slightly more reassuring path through the doom, and while the atmospherics still sweep through like freezing gusts through a concrete shell, here it feels like you’ve at least got some blankets to wrap yourself in.

This comparatively upbeat closure is not the only similarity Irreal shares with Liars’ incredible 2006 album Drums Not Dead. Both occupy shadowy, amorphous territory, revolving around percussion and repetition, surreptitiously dominating their environments by warping them upon contact. If you’re not fully convinced by the electronic detour Liars have taken in recent years, you’ll doubtless find much to satisfy you here.

Disappears’ Irreal may suggest something intangible and illusory, but the quality of the music is as stark as Trajan’s Column. And with that, I’m off to buy a sack of sharon fruits… 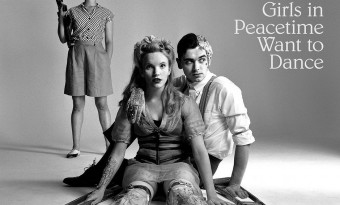 Belle & Sebastian's ninth studio album may open with a four chord atrocity (and resemble a Pet Shop Boys tribute at points), but its contagious optimism and energy will win you over by the end...
Read More