It’s freezing in London right now. Seriously. I woke up to a blanket of frost, ice-danced my way to work, and then opened my laptop with shivering fingers as our single space heater struggled to alleviate the chill. ‘Still, it’s not all bad,’ I thought, ‘at least we have a great video by Theo to premiere today.”

Deciding to give it one last watch, I pressed play with trembling fingers – to find Theo sitting topless in the sunshine before riding his bike through town without a care in the world. Now there’s a man not worried about whether his boiler will survive the winter. What a bastard.

Still, with songs like ‘Holding On To Your Love!’ it’s impossible to stay mad for long. The debut single from the argonaut&wasp man’s upcoming solo EP Love Songs (for a girl that can’t be loved), it speaks to his interest in Lou Reed, Modern Lovers and the early proto-punk movement.

There’s certainly a Jonathan Richman-esque snuffle to Theo’s singing (as well as his curly barnet and sunny guitar licks), and both the song and the video have a charm and warmth capable of thawing even my glacial heart. Theo was assisted in creating this effect by fellow New Yorkers Chris Corsico (drums), Collin Klippel (guitar) and Steve Conroy (Bass), although judging by the video he appears to have nicked Corsico’s snare by the end. (I wouldn’t fancy trying to take it back either, what with all the iron he’s been pumping…)

“While on the one hand, the character portrayed in the video may be an over-amplified and romanticized version of the musician I would like to be,” admits Theo when we asked for his thoughts. “Perhaps, through the lens, I was able to bring out an equally true version of myself. Patrick Elmore, an incredibly talented film maker with an eye worthy of the big screen, captured the quirky, drunk, and heartbroken character I attempted to create through the lyrics of the song.”

Theo also tells us to expect “an EP full of romantic lullabies, songs about failed affairs, hissy drums, and reflective lyrics. Or, in another words – a bunch of sappy bullshit.”

Which sounds great, frankly. Until then we’re just going to have to give ‘Holding On To Your Love!’ another spin. Is it me, or did it just get a little warmer in here? 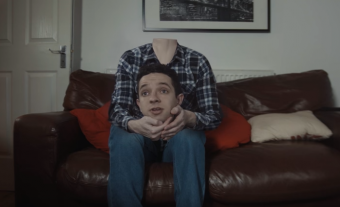