Opening with ‘Sick Ass Moon’ from their new new record As If, a thought crossed my mind as I jigged my hips to the infectious repetitive beat: “Are !!! / Chk Chk Chk the ultimate feel-good party band?” Having emerged from the bristling NY punk-dance scene with acts like Rapture, LCD Soundsystem, Radio 4 and Out Hud, they’ve now outlived them all and are running with the baton, not looking back. I look around and see a sea of smiling faces, going for it as if the clocks go back the next day (they do). And it’s not even 9pm yet. This is an ridiculously early gig for a Saturday night but regardless, the crowd are surfing on the feel-good punk-funk waves. “Cowbell? We invented that shit!” 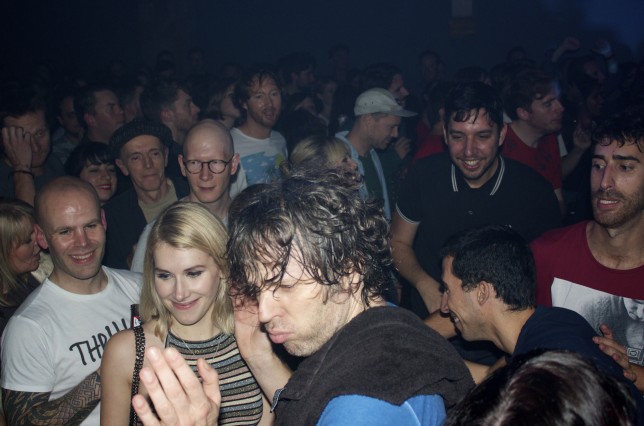 As ‘Every Little Bit Counts’ channels their best disco-funk spirit, singer and crowd-cheerleader Nic Offer struts around orchestrating the audience with a drop of his shoulder. It sounds like a cross-hybrid of Twin Shadow and Earth, Wind & Fire dropped in the Hacienda in the early ’90s, as he laments, “I’ve never been to Rio and I’ve never been to Spain,” dripping with sweat and slapping his own salt-drenched face. 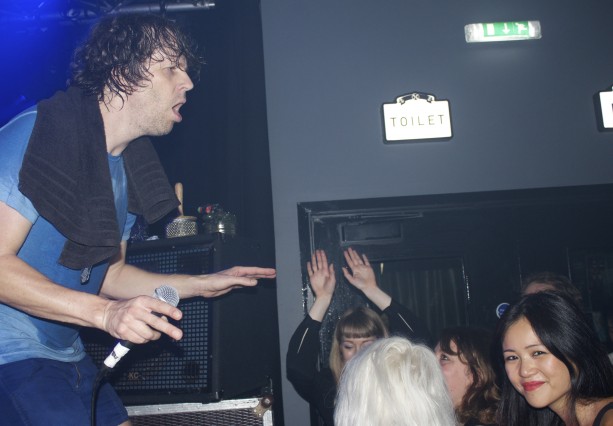 !!! are now a much tighter and smaller outfit. I’m sure the last time I saw them they had eight or nine members but here they’re a much more focused four-piece. ‘All U Writers’ sounds particularly distressed with its echoed vocals and hypnotic synth bassline. In fact I’m sure he looks directly at me as he sings ‘All your writers get our your pens and write’, as I scribble on a post-it notepad some rough notes for my review. This one. That you’re reading. Oh shit. 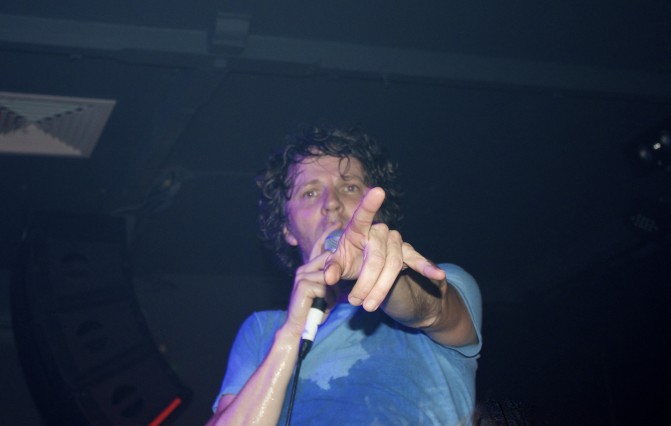 I’m not sure if taking notes was even a good idea, as Offer is now taking to the crowd to get down with it. During ‘Bam City’, as it creeps along, he whispers, “We just got back from Bilbao – it’s such a great little town…” before the song is drenched with slabs of synths and distortion. He gets the front row to accompany him on vocals, which they manage admirably, as they sing it word perfect whilst taking constant selfies. 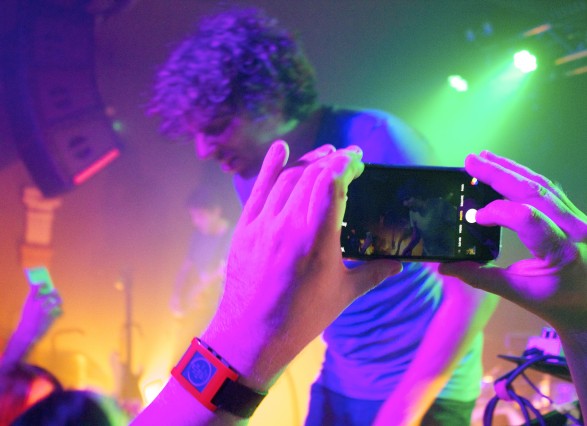 For the record, I don’t actually see this as a bad thing. !!! are such an undeniably photogenic band, and Nic Offer is without question one of the most charismatic frontmen around, so you want to ensure you take the photo opportunity when the moment presents itself, whether it’s a raised arm, a fist clench, a crotch-shot in his skin-tight shorts or as he’s swallowing the microphone. I find myself guilty of being particularly snap happy, pleading with him to slow down as I can’t keep up with such gold material. 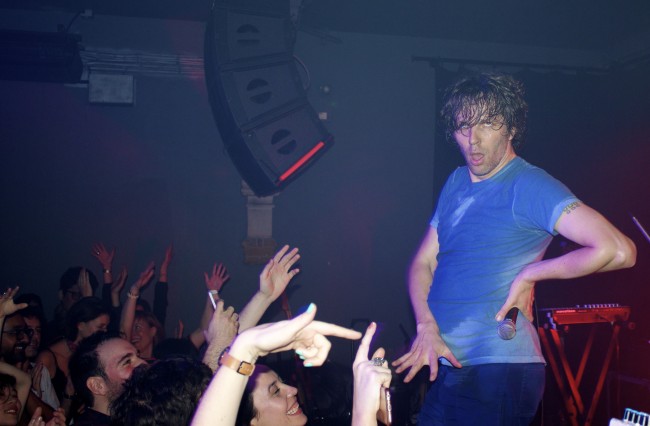 The end stint is most excellent. ‘Freedom! ’15’ drops and the crowd go ballistic. Not since Louden Up Now, when they sang about George Bush meeting Tony Blair and Rudy Giuliani, have they touched on political themes with such a gust of fury. It sounds like an angry ‘Show Me Love’, as tour singer Layla snarls “No offence, whoever this person is, I don’t have much interest in…” before launching into a frenzied chorus of “Freedom! How’s that working for ya?!” It gets the crowd literally jumping in unison, so much so that I actually foresee the floor collapsing. The horror. Thankfully it doesn’t. The only collapsing is the void crashing open in my soul knowing that the gig is about to finish and it’s not even near 10pm. 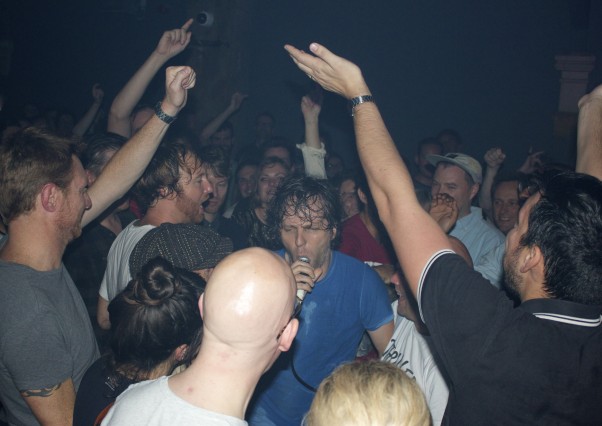 During the encore of ‘I Feel So Free’, the choir leads the crowd to accompany the refrain of “Say it ain’t so-so-so-so,” and we duly oblige. It’s a sight to see how Offer has the entire crowd eating out of his hand. He could lead a congregation and convince the entire gathering to convert to his funk-fuelled religion of dance, letting yourself go and removing all inhibitions. 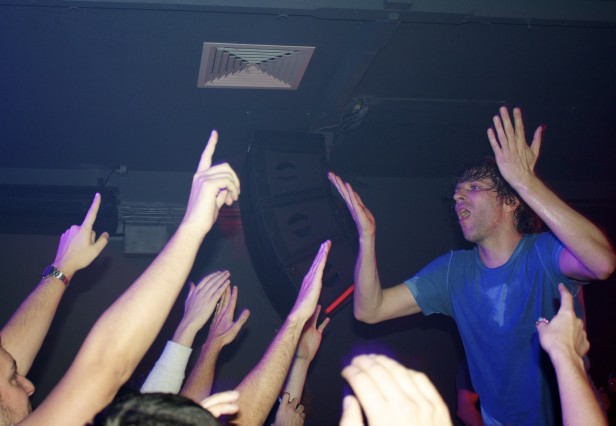 It could only lead to a world of peace and harmony I’m sure… like a constant drunken wedding party complete with dad-dancing. Oh please dear God no. I recall Nic Offer once said: “You know, we were the first to start making this music and when it got popular we knew we were going to still be making it afterwards. This is just what we liked: to dance.”

!!! are still making it, and we’re still dancing. 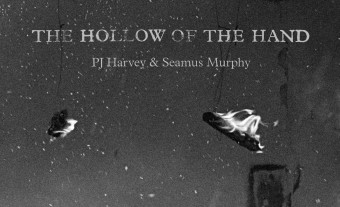 PJ Harvey presents a book launch like no other, performing ten new tracks alongside the stunning war photography of Seamus Murphy...
Read More