There have been a few high profile music deaths recently. Some, like Phil Everly and Lou Reed, were sad but not hugely unexpected (although we defy you to keep your eyes from dampening while reading Laurie Anderson’s tribute to her late husband in Rolling Stone). Others losses, like those of Child of Lov and Benjamin Curtis from School of Seven Bells, were sad in a different sense – losing anyone at such a young age through illness is always tragic.

However, the death that has shocked me most of late is, bizarrely, only a symbolic one. Last September Gemma Williams, the woman behind the experimental folk project Woodpecker Wooliams, announced the end of her alter ego in typically poetic fashion: “I just felt her heartbeat stop after the weekend and the blood slip out”.

That weekend had, unbeknownst to even herself, seen her final gig take place, appropriately, at End of the Road festival, a performance that apparently began with Williams standing stark naked in the audience with nothing but a megaphone (hell of a way to go out). According to her last blog post , she then stumbled across a book in the woods that had been left open on a page about woodpeckers. In red writing, someone had scrawled the word ‘death’ over the top of it.

Perhaps such things are simply meant to be, but we’re beyond gutted that there will no longer be a follow-up to Williams’ incredible ‘The Bird School of Being Human’ album (one of our top five albums of 2012). Instead, the Woodpecker leaves us with this polished but disturbing video for ‘Crow’, one of the highlights of that record.

It starts, fittingly, with a shaky sample of a bugle playing the ‘Last Post’, while director Leonardo Machado matches the funeral dirge feel with a video that explores some typical Woodpecker themes: domestic violence, sex, depression and personality disorder. Choosing to subvert stereotypes surrounding both violent relationships and female nudity in music videos, it is, like the song, an uncomfortable experience – the central character suffers several forms of abuse before choosing the ultimate escape route.

Yet while this makes sense considering ‘Crow’ is something of a Woodpecker Wooliams suicide note in itself, lyrically Williams actually adopts the role of aggressor: “I had constructed a great funeral pyre / Tied her to it and devoured her as if I were fire”. Meanwhile, the depth of her music is measured by the fact that after listening to it regularly for over a year, I’ve only just noticed the sample of the ‘Swedish Rhapsody’ numbers station that worms its way through the distorted musical soil she turns over during the messy finish.

Dark, complex, despairing and beautiful, if this really is the last we hear from Woodpecker Wooliams, then it’s the perfect way to go. And as a parting gift she leaves us with a free download of the track complete with a remix bundle. We suggest you pay your own tribute and purchase a copy of the album it originally comes from, here. The Woodpecker may be dead, but the music lives on…

The Pussywarmers & Réka - Something You Call Love 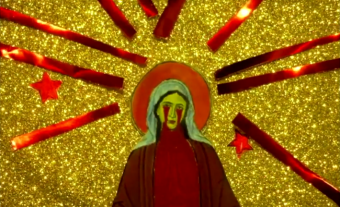 Bloody Marys all round (quite literally) for these Swiss miscreants and their cosmically bound Hungarian friend, in the most sun-splashed psychedelic video you could hope to see this winter...
Read More