Savages, street politicians, tarts and darts – get stuck into the first Single-Minded of 2016…

The Dandy Warhols – You Are Killing Me

Who was hoping 2016 would herald the triumphant return of The Dandy Warhols? Not me, and by the sound of the impossibly lacklustre vocal on ‘You Are Killing Me’, nor Courtney Taylor-Taylor. Happy new drear. Kier Wiater Carnihan

Exec – Life Is A Liquid

‘Life Is A Liquid’ sounds like sincerity incarnate but is actually mainly allegorical nonsense. I could’ve lived with the cliché had it been formulaic but the additional beard-scratching makes the lyric element to this pretty passable, and the music doesn’t do anything to take your attention away from the vocals. At least in brevity it retains the innate prettiness usually found in these sorts of piano pieces. Nicholas Burman

One of the main things grime has not been during its rise in popularity is outwardly political. As an industrial point, the rise of independent collectives like Boy Better Know may be political in and of itself, but on the mic MCs have remained defiantly soap-opera-grime-scene orientated. Novelist takes a detour then, with the Cameron-sampling ‘Street Politician’, and continues to morph into the second coming of Dizzee Rascal. He’s moved on a little from his disparaging look at gang culture in ‘1 Sec’ to pointing accusations of mismanagement in the direction of Our Glorious Leader. It’s not grime’s ‘Fight The Power’ moment, but that can’t be far off, can it? NB

Los Angeles label Felte start 2016 the same way they’ve started every other year since their inception – deeply enveloped in a dark, atmospheric mist. Public Memory nail this aesthetic as well as anyone save Eraas, but while ‘Ringleader’ is an enjoyable track to lurk in, it lacks their labelmates’ ear for a hook. KWC

I don’t know whether Welsh post-rock duo Right Hand Left Hand spent the festive season as I did – watching the PDC World Darts Championship – but the title of their latest track suggests they might have done. Luckily they’ve come up with something far more appealing than the dreadful music Sky Sports subjected dart-loving viewers to… ‘Tarts and Darts’ is less Planet Funk and more early Rock Of Travolta, and, unusually for the genre, rollicks along in under three-and-a-half minutes. It’s a free download too, preceding next month’s eponymous second album. Bullseye! KWC

RJD2 – Peace of What

I always preferred RJD2 when he was about samples and instrumentals rather than vocals and cheesy funk. Sadly ‘Peace of What’ finds him still firmly entrenched in the latter furrow. It pains me to say it, but even Mark bloody Ronson does this sort of worthy retro-fetishism better these days. KWC

2016 should be the year we rephrase the old adage to: “if you have nothing interesting to say, please don’t sing.” While there were tunes aplenty in 2015 the lyrics were a bit shit, bar a few notable exceptions. One band that can continue singing though, is Savages. In this second stage of their return, Jenny Beth delivers her most exciting vocal yet, juxtaposing “I adore life” against their trademark goth / Patti Smith / grunge rock that eventually bubbles into one of the most effective anti-crescendos since The National first perfected that trick on High Violet.

Given the ubiquity of both Sia’s songwriting and Kanye’s production, a track which combines them under Sia’s name sounds pretty… copycat. Not that this won’t sound good on the radio, if only for the fact it’s music-by-committee. NB

The best drug-trip song since Jeffrey Lewis’ ‘The Last Time I Did Acid I Went Insane’. Sonny Smith’s protagonist, the victim of “a bohemian quarter-life crisis,” starts the track heading to the beach to drown himself, but gets diverted towards an ayahuasca ceremony with predictably surreal results. The music is more enjoyable than the trip depicted, shifting to reflect Smith’s well-observed lyrics in impeccably complementary style. Apparently this is chapter 5 of the 6 that together make up the fully-fledged story contained on new album SEES ALL KNOWS ALL, and it certainly leaves you thirsty for more. Roll on next Friday, when the LP is released. KWC

So Pitted – Feed Me

High quality stoner metal which has me wondering where I left my teenage Nirvana hoodie and shoulder-length hair. NB

Political hip-hop focusing more on international relations than domestic issues in the US. The production has a Nas-like atmosphere to it, and while Tekh Togo and Joose The Conqueror spit like relaxed stoners, that doesn’t cover up the fact they obviously care – and the track is all the better for that effort. NB

White Denim are excellent musicians, but sometimes they struggle to rein themselves in. This track, their first since 2013, sadly indulges their southern rock itch to an irritating degree, and leaves me feeling like Bill from King Of the Hill after one too many hotdogs… KWC 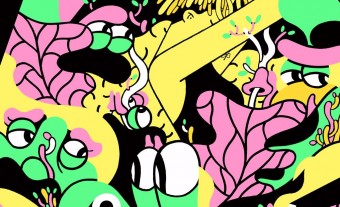 We start the new year by reviewing the best EPs released as 2015 faded to black, with Bonzai, Muzi, Josep and Rocks FOE among those going out with a bang...
Read More