The latest mixtape by Berlin via Houston artist Lotic comes out on his spiritual home of former club and label Janus, where he and like-minded producers rip apart the world of generic club music by pushing it in new directions, while giving the dance music enthusiast enough to maintain some kind of grounding in a world they feel safe in. On slightly different terms these artists might be filed under avant-garde rather than as dance producers.

Agitations is a record full of disparate sounds from all corners of grime, ballroom, rap, jersey club and techno, which sounds closer to an angry sound designer punishing these genres (and many more) for the formulaic rules and motifs they stick to. It is these moments of recognition, which feature throughout the record, that tease the listener into believing they are about to be given a lengthier moment of familiar rhythmic structure, only to have it snatched away as the track veers away back into twisted chaos.

The moments of clarity are still vaguely unsettling, such as the organ-based interlude of ‘Feign’ or the sci-fi sirens and Carpenter-esque horror synth line on ‘Bravado’. These are the thrilling indulgences that draw you back in just as the throat-closing anxiety of the percussive samples on Agitations become overwhelming. The itchy screeching on ‘Carried’ calls to mind a reactor meltdown on alien spacecraft.

For all its industrial, deconstructed weirdness this record still comes across as very cinematic; although it would probably be the soundtrack to one of those extreme films that, after watching, you may be a little unsure as to whether or not it had any value other than it being something shocking, that you’d never seen before. In terms of percussion, any sound of unidentifiable origin is bent and twisted into entirely new shapes in order to sometimes propel and at other times jarringly stop a track, just as it seemed to be going somewhere the listener recognises.

Lotic’s views on the straightness and whiteness of wider club culture are usually at the forefront of his thoughts when describing the musical landscape he straddles, so it stands to reason that he would want to break with the norms and make them ‘other’ within his own music. This may not be the future of club music, but it does seem a reaction to the status quo by an artist who feels there are walls to be torn down in order to create excitement. It’s more likely to make you feel like you’re having an anxiety attack, rather than make you want to dance in a sweaty club… in a good way. Sort of. 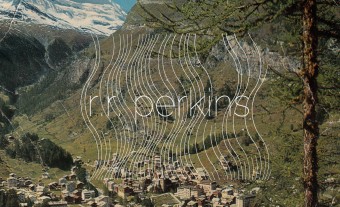 It might not be a Christmas album per se, but RR Perkins has gifted us a musical Xmas stocking stuffed full of petite treats and dreamy delights...
Read More