What happens when Sly & The Family Drone, the finest purveyors of audience participatory electronic noise wonk, meet the experimental avant-jazz of Dead Neanderthals? The answer, the brilliant howling skronk of Molar Wrench, that’s what.

The whole record has a delightfully musky air of horror leaking throughout, which for a complete gibbering troll like myself is a wonderful treat.

The first track, ‘Ghoul Whispers’, is so full of struggle and fight that you’d be forgiven for thinking that its clattering buzz is the byproduct of Big Daddy grappling with Giant Haystacks in a ring made of rusty metal and broken bottles.

In places its foreboding drone reminded me of the (still very disturbing) 1958 movie ‘The Fly’. It’s pulsing, ebbing hum bringing to my mind the melancholy pleas of ‘help me’ that emanate from the human mouth of André as he is, in fly form, steadfastly trapped on a spiderweb as its greedy host proceeds to encroach with salivating glee.

The centrepiece of the album is the two parted Muck Man. Ending side one of the vinyl ‘Muck Man (Part 1)’ is a palpitating warning, a flickering and strobing glow bursting from the top tip of a light house, casting its focussed beam to the seas through a ghostly fog. A siren’s call beckons unwary passing ships and those that are foolish enough to fall foul of the beatific terror will be stripped bare of their flesh by the ghouls of long deceased boatmen.

The ominous and mysterious intro of ‘Muck Man (Part 2)’ descends into a steaming, dark abattoir of claustrophobic filth. Slowly the distorted fractions of sound are brought into the light and into focus, and as the track progresses it reveals a gut punch of mangled and fetid debris united by unflinching fear. The deeper you enter the more human the broken shapes become.

Its unhinged squeal and squelch unveils a feral terror which is like inviting The Texas Chainsaw Massacre’s Leatherface around for elevenses. He likes a nice cup of tea does our Leatherface.

In places the collision of sax and machine creates a wailing scree that reminds me of the soundscapes that you’d find in the dream-like horror movies of Italian gore king Lucio Fulci.

It’s the condensation of horror, a delicious throbbing sick bag filled with vital goo, like the revitalising needles of Re-Animator’s Herbert West.

Let it seep over and drown you in its vital suffocating glory. 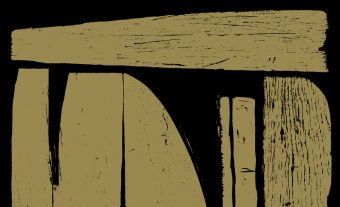