I’m not a very Christmassy person. Don’t get me wrong, I like the time off work, the neverending procession of cheeses and the acceptability of adding Baileys into every hot drink for a fortnight, but when it comes to suspiciously generous fat guys with beards, I’m over it by the second Christmas advert. (So about mid-November…)

My lack of seasonal spirit became obvious this weekend after some friends came over for Sunday lunch, and were soon reprimanding me for the lack of Christmas decorations in the flat. There was a Christmas tree, but apparently the fact it was only a foot tall and had been accidentally stolen from Morrisons earlier that afternoon meant it didn’t count.

Then I was told off for not playing any Christmas songs during dinner. I tried to protest that I didn’t have any Christmas albums on vinyl (intentionally avoiding the possibility of just plugging a laptop into the amp), but even that didn’t work. We didn’t have to listen to actual Christmas music, I was told, just music that sounded Christmassy. Ella Fitzgerald and Dean Martin were suggested. Eventually we reached an uneasy compromise of Lee Hazlewood & Nancy Sinatra.

In retrospect, I should probably have tried playing the latest record by Philadelphia’s RR Perkins. While not a Christmas album in any way, shape or form, there’s something blurringly nostalgic conjured by his music, equally inspired by early psychedelia, classic film scores and kitsch exotica, that seems to fit the bill. Maybe it’s just the season but RR Perkins’ third release, the imaginatively titled Vol. III, has a soothingly festive feel to it that could melt any snowman’s heart.

Listening to opener ‘It Will Come Around’ is like watching the flakes of a snowglobe settle in front of an open fire, as you knock back a glass of port to the sound of a slightly warped record playing on the gramophone. Not that I’ve ever spent a Christmas doing that, but RR Perkins has an uncanny knack for triggering imagined memories as well as warm responses.

They’re just snatches of memories though – not a single one of the eight tracks here breaks the two-minute mark. ‘Autumn’s Foliage’ is all Mac DeMarco gooiness and fluttering synths, while ‘Smitten’ sounds like a children’s toy after it’s been left out in the garden all winter. They flicker into view, glow contentedly for ninety seconds, then fade away into the ether. It gives Vol. III a dreamlike atmosphere that only adds to its charm.

Often these fragments are perfect as they are, but sometimes you can’t help but wonder how much further they could be taken. The fuzzy psychedelic strut of ‘Presence’ feels like it’s just a vocal take away from turning RR Perkins into the next Jacco Gardner or Frank Maston, and you wonder whether he’s truly doing them justice by being so stringent with the sequencing guillotine. Then again, listening to the lo-fi drawl of Vol. I, maybe the lack of vocals actually adds to the timeless quality of this release.

Ignoring any vague feeling that this is more of a sketchpad than a full album, there is something quite nice about the fact that nothing ever outstays its welcome. Our increasingly impatient attention span and itchy digital trigger-fingers mean it can be rare to find an album that doesn’t encourage you to skip forward at any point. Brevity isn’t the only reason for that here, but RR Perkins’ approach certainly suits the ADHD age.

It’s real strength, however, is the way tracks like the squishy, whirring ‘Auburn’ feel like dusty relics that have been uncovered and lovingly restored, a little like the early Bibio and late L. Pierre records. The cheesy keys of ‘Wane II’ are probably the only notes that don’t quite hit the spot, but that’s just the single lump of coal in a Christmas stocking that is otherwise stuffed full of petite treats. However, unlike the unwanted Christmas presents which will doubtless be clogging up charity shop shelves in a few weeks, RR Perkins has provided a gift that will keep on giving all year round. Roll on Vol. IV… 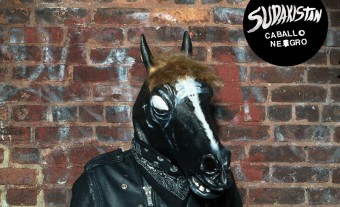 The Swede-Latino garage groove of Sudakistan demonstrates how culture clash can be a beautiful thing, on a scorchingly energetic debut album...
Read More