While the Sam Cooke-a-like sounds of Leon Bridges may have been ubiquitous in 2015, the year’s best soul revival album actually sprung from a lesser known source, the Soho-based septet Ephemerals. Chasin Ghosts, released on Jalapeno Records at the end of October, features eleven impeccably-produced tracks, including the superlative single ‘You’ll Never See Me Cry’, which sees James Graham’s gusting piano providing the springboard for an incredible vocal by singer Wolfgang Valbrun.

The Monitors are proud to premiere another Ephemerals track from Chasin Ghosts today: the heart-rending ‘Get Out’. Described by the band as “a mournful howl against depression and the call of suicide to those that suffer it,” it sees Valbrun delivering his most moving lyrics to date: “I could just get out / No one would even notice / I wouldn’t make a sound…”

Yet he holds on, managing to suppress his desire for a simpler existence (“Reincarnated into a lesser being / Don’t want to think so much / Just want to kill and eat”), although the poignant chorus shows that he’s still conflicted: “Not gonna try and end my life / ‘Cos I’d hurt the ones I love / But at night I close my eyes / And I hope that I don’t wake up.”

The chorus once again floats along on strings provided by Southampton’s Cordicella Trio, while Ephemerals band-leader Hillman Mondegreen’s guitar stabs punctuate the smoothly flowing horns of Damian McLean-Brown and Thierry Lemaitre. The track is subtly underpinned by the rhythm section of Adam Holgate and Jimi Needles, until it fades away with a tear-jerking string coda.

In a society where suicide remains the biggest killer of all men under 45 (a shocking statistic that charities like CALM continue to fight against), ‘Get Out’ is an honest and unflinching look at the dark places our minds can lead us.

You can purchase Ephemerals’ Chasin Ghosts from Jalapeno Records here. 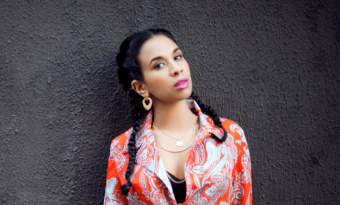 Iman's 'Golden' is one of the best pop tracks we've heard in an age, and we invite you to read her lips with the premiere of the accompanying lyric video...
Read More